Skip to content
U.S. Air Force Tech. Sgt. David Rich II, a Security Forces flight chief at Air Base 201 in Agadez, Niger, looks at a map of the base during a pre-brief for the day’s patrol, June 26, 2019. U.S. Air Force photo by Tech. Sgt. Perry Aston.
Expand Photo 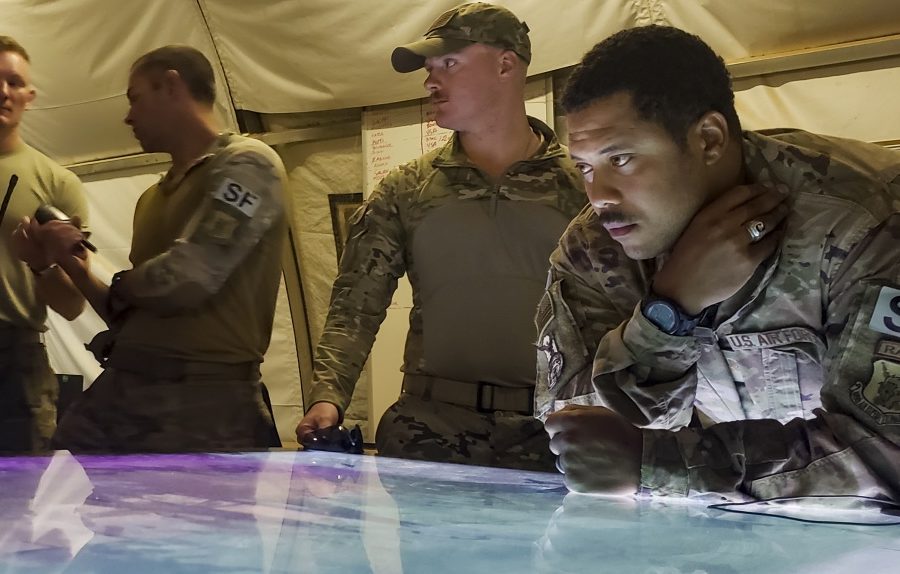 Battlefield deaths from terrorist attacks in the vast, ungoverned region of Africa known as the Sahel have forced France to cut its military presence in half and ink a special operations deal with the U.S. at the Pentagon on July 9.

But French President Emmanuel Macron announced in June that he was tired of dealing with the corrupt and fragile states of the G5 countries—Mali, Niger, Burkina Faso, Chad, and Mauritania. In the past year, the president of Chad, where the French troops are based, was killed in battle, and Mali suffered a military coup.

French public support for the ongoing military presence was wobbly at best, and Macron began to court European allies who would likewise face a terrorist threat emanating from Africa.

Meanwhile, French soldiers continued to die in combat, even as 3,000 soldiers from 10 European countries partake in Takuba Task Force and fight side-by-side with African G5 soldiers.

Macron said July 9 he will reduce French forces by half, to 2,500-3,000 and a few hundred special operations forces, and Parly asked Austin to increase the American Special Forces commitment.

“During my meeting with Secretary Austin, I referred to the efficiency and the strong need for the future of this support,” Parly said at an Atlantic Council discussion following her Pentagon meeting.

The French defense minister stressed how American intelligence, surveillance, and reconnaissance, provided in part by American MQ-9 Reaper drones operating from Air Base 201 in Niger, are helping the French to get accurate information and intelligence on terrorist groups.

“We can rely on a strong support from the United States, especially in the counterterrorism operations,” the minister said. “Secretary Austin said he was reviewing the global posture, and so I felt [it was] very important for him to know that we continue relying on this very specific U.S. asset, which at the end makes the difference.”

In announcing the U.S. withdrawal from Afghanistan on April 16, President Joe Biden pointed to Africa as one of the “disparate” locations where terrorist groups are strengthening through recruitment and fundraising.

AFRICOM has conveyed its needs to Austin as part of the ongoing global force posture review.

“We see terrorism globally distributed,” AFRICOM Deputy Commander Lt. Gen. Kirk W. Smith told Air Force Magazine in a recent media roundtable. “We recognize the threat that emanates from Africa, and the potential that that can turn into, and therefore why it’s important to us.”

Smith said AFRICOM is working with the Office of the Secretary of Defense and the Joint Staff to hash out the analysis of inputs that the command prioritizes in the terrorism fight.

“We absolutely recognize in the Sahel itself where those challenges are,” Smith added. “That is kind of why we are partnered where we are with who we are right now, principally those G5 countries, the G5 Sahel, and with the French.”

AFRICOM commander Gen. Stephen J. Townsend has described the spread of terrorism in the Sahel as a “wildfire” that could engulf West Africa’s littoral states.

Smith added: “Our concern is that potentially we see that continue to spread.”

“In the region, we currently provide support to French counterterrorism operations through logistics, aerial refueling, aerial resupply, and intelligence sharing,” the spokesperson said.

KC-135 Stratotankers from RAF Mildenhall in the United Kingdom, deployed to Moron Air Base in Spain, are part of Operation Juniper Micron, helping support France and Mali in North Africa since 2013.

In the face of rising great power competition with Russia and China, along with a desire to slow the operational tempo after 20 years of Mideast wars, Austin now confronts a new challenge as a major ally begins pulling out of the regional hotbed for terrorist groups.

“We’ll also spend some time today discussing our cooperation in the Sahel,” Austin previewed in public comments prior to meeting with Parly. “The United States is proud to support our French and African partners.”

Parly, for her part after the meeting, indicated Austin’s commitment to Africa was intact.

“I am delighted to announce this morning Secretary Austin and I signed a roadmap to strengthen even more the relationship between our two special forces,” Parly said. “America is back. Now let’s get to work, and we will deliver.”