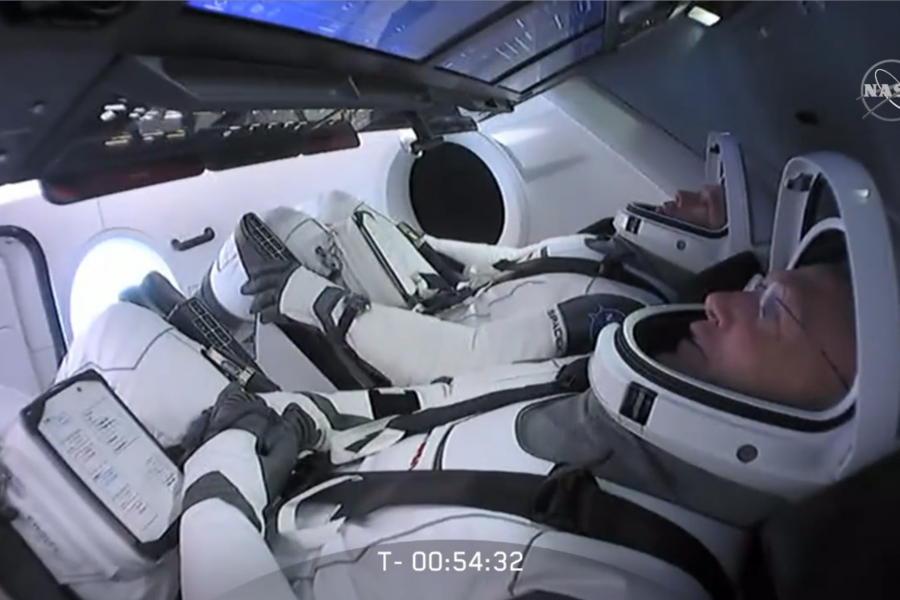 For Clues About Space Force’s Future, Look to Crew Dragon

Some space watchers say NASA’s return to launching astronauts from U.S. soil this weekend could shape the far future of military manned spaceflight, though others say the new Space Force doesn’t need to aim for “boots on the Moon.”

SpaceX’s Crew Dragon spacecraft will carry NASA astronauts Robert Behnken and Douglas Hurley to the International Space Station using a Falcon 9 rocket, marking the first time since 2011 that the U.S. has not relied on Russia’s Soyuz program to take people to space. Behnken is an Air Force colonel; Hurley retired from the Marine Corps as a colonel.

The Space Force, and Air Force Space Command before it, does not handle human spaceflight, and does not have its own cadre of astronauts. NASA manages space exploration and often chooses military members to be part of its civilian astronaut corps. The Space Force instead operates systems like orbiting satellites and runs the launch ranges used for military and commercial missions, not human missions like those that will leave from NASA’s Kennedy Space Center in Florida.

But NASA’s Commercial Crew Program, for which Crew Dragon’s planned May 30 launch is the first manned mission, could still spur ripple effects for military space. The launch was originally scheduled for May 27, but was scrubbed about 20 minutes before takeoff because of poor weather.

The Space Force was created in part to support NASA as it looks to set up permanent facilities on the Moon, as well as privately owned companies pursuing Internet service and more from low Earth orbit. It’s plausible that the Space Force and other military branches could establish a presence on the Moon that accompanies NASA’s Artemis program, which aims to set up shop on the Moon as a jumping-off point for travel to Mars.

Others aren’t so keen on the idea, at least for the foreseeable future. Todd Harrison, director of the Aerospace Security Project at the Center for Strategic and International Studies, believes military space missions are better done without humans in orbit. Former Air Force Secretary Heather Wilson argues that protecting the national security enterprise’s approximately 120 satellites doesn’t require putting people in space.

“There is no manned military flight and no need for it—certainly in the next 10-20 years,” Wilson said. “Some people talk about protecting space commerce. That is pretty far away and [it is] not clear that manned operations would be the best way to do that.”

Just as the military and industry both have multiple ways to move around on land, in the air, and at sea, space may eventually be the same. But humans still have a long way to go to be adept at flying in orbit.

Jon Cowart, systems director for Aerospace Corp.’s human spaceflight activities at Kennedy Space Center, believes scientists could head to orbit before service members. Sending scientists to space with their experiments may be the first routine application of military manned spaceflight before uniformed personnel arrive, he said.

Other mission areas could likely overlap. The Space Force can prevent and help NASA avoid on-orbit collisions, and deconflict intentional or unintentional interference with civilian and military space operations, Harrison said. Space tracking, communications, and navigation technologies will be even more important. The return of American human spaceflight can also drive a greater need for data analytics, energy research, space-related health care, cybersecurity, and more, some of which the military might handle, Space Foundation Chief Operating Officer Shelli Brunswick said.

SpaceX’s launch will help prove the concept of commercially led spaceflight, further shifting away from the government as the sole entity putting people in orbit and making access to space more widely available. That, in turn, poses the question of who should handle space operations if something goes wrong.

The Space Force’s creation is a first step toward blurring the line between civilian and military space, particularly as it could take on the search-and-rescue role, Brunswick said.

Vedda likened the Space Force to an orbit-focused version of the Coast Guard, which occupies a unique role as an armed force that falls under the Department of Homeland Security. From that perspective, the Space Force could handle its main mission of commanding military space assets under the Defense Department, but someday take on civilian rescue missions and other law enforcement work as commercial and NASA operations evolve.

Restarting domestic human spaceflight will affect the U.S.-Russian relationship as well. America is already moving away from the Russian-made RD-180 engine for its rockets, and less reliance on the Soyuz will shrink a major source of revenue for Russia’s space industry. Weaning the U.S. off of both the RD-180 and the Soyuz program will create financial problems for Russian suppliers, Harrison said.

It’s possible that U.S. lawmakers and the executive branch could eventually reverse their plan to ditch Russian systems, but there are enough backup options available to power American rockets to avoid returning to the RD-180, which powers United Launch Alliance’s Atlas V rocket, he added.

Space Force leaders lauded the Crew Dragon mission as the astronauts suited up and worked through their pre-launch checklist.

“The crew is settled in,” Chief of Space Operations Gen. Jay Raymond said. “Get the jalapeno popcorn ready.”