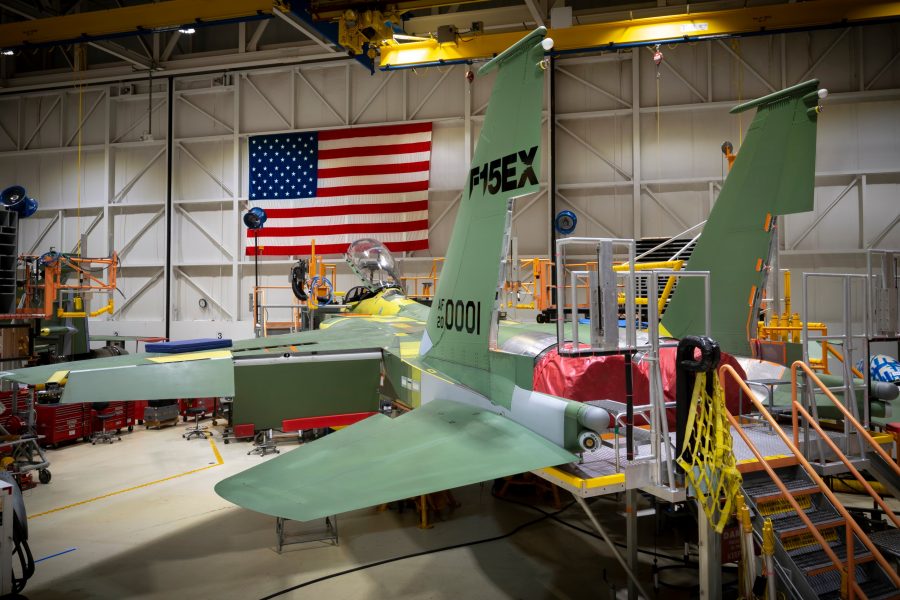 The first two F-15EX aircraft are already well under construction and should be in the Air Force’s hands for testing at Eglin Air Force Base, Fla. by early next year, Boeing F-15 Vice President and Program Manager Pratyush Kumar told reporters July 15.

“We have been leaning-in to get the jets delivered much faster than the normal lead time of 39 months. And we will be in a position to deliver these jets by the first quarter of 2021,” Kumar said via teleconference. The first six aircraft will be used for developmental and operational test, and they will be convertible later for use as operational airframes.

The briefing came two days after USAF’s $1.2 billion award to Boeing for the first eight F-15EXs, which also set a not-to-exceed ceiling of $22.89 billion for up to 200 of the fighters. The fiscal year 2021 budget request includes 12 more aircraft, and up to 76 over the next five years, Kumar noted. The Air Force’s minimum quantity is 144 airplanes.

The jets are “a very enhanced and modern version” of the F-15, he said. The EX is based on the F-15QA being built for Qatar, the first of which flew in April. Boeing is also responding to a request for information from Israel to buy 25 new F-15EX jets and upgrade another 25 to the EX configuration. The work already in hand means that the F-15 production line will be “open for the next decade, and beyond,” Kumar said.

There are 400 suppliers in 42 states, with “55,000 people on the program,” which has been structured to get jets into the Air Force’s hands as fast as possible, Kumar said, given the urgency of the existing F-15C/D fleet’s structural exhaustion.

The heart of the airplane is a new core processor performing 87 million calculations per second, but there will be a common avionics software suite across the F-15 fleet, “maintaining interoperability.” The aircraft will have open mission systems architecture and permit new software updates more frequently, and with a broader array of suppliers.

The AESA radar—the APG-82—is the “largest” on a fighter, Kumar said, and the pilot will wear an advanced digital Joint Helmet Mounting Cuing System, or JHMCS.

The EX will have two seats, but the aircraft is “entirely operable from the front seat with a single pilot,” he said. Asked why the aircraft will be built with a functional rear cockpit if the Air Force isn’t planning to use it, Kumar said the “first objective was to get an aircraft as quickly as possible,” and changing the configuration would have added delays to its fielding, “so we didn’t touch it.” The Air Force may opt to use the rear cockpit for some kind of “AI [artificial intelligence] capability” or “manned/unmanned teaming” technology in the future, he said. “It’s certainly possible,” and Boeing has had “extensive” discussions with the Air Force about possible roles for adding a backseater in the EX.

Boeing says the airplane can carry a 22-foot long missile weighing up to 7,000 pounds on the center station, suggesting the jet can launch a hypersonic missile, but Kumar declined to discuss what kinds of weapons might be considered for it. The EX is a “fully multirole” aircraft capable of doing air-to-ground as well as air-to-air missions, he said, unlike the F-15C/D, which focuses exclusively on air superiority.

The EX “leverages the digital engineering” approach Boeing has taken with the T-7 advanced trainer, Kumar noted, and will employ Air Force acquisition chief Will Roper’s “Digital Century Series” ideas in digital twinning. This will speed updates and “you don’t have to do the full-up integration testing,” he said. “You can test that in a virtual environment and get that capability in a much more rapid fashion.” This also allows the use of weapons and systems from third parties using “containerized software” and Kubernetes approaches.

Digital applications on the factory floor, such as robotically pre-drilled holes, will reduce touch labor and “increase quality while decreasing cost.”

Digital methods will follow Roper’s dictates to “rapidly evolve new platforms,” and “increase supply base choices, … and keep industry in a pretty healthy competition,” he asserted. Using 3-D modeling has resulted in “a 70 percent reduction in touch labor on the shop floor, after the initial learning curve,” he added. Pushing some of that to suppliers can be risky—“and you have to watch that”—but is resulting in far less work on the shop floor, Kumar noted.

One feature Boeing was pushing as part of its “Advanced Eagle” campaign was the Advanced Missile and Bomb Ejector Rack (AMBER), which could sharply increase the loadout of the EX’s dogfight missiles, but Kumar said that’s not a feature of the EX program.

“So far, our U.S. Air Force customer seems to be happy with the 12 air-to-air stations” on the EX.

The Eagle Passive Active Warning Survivability System (EPAWSS), which is crucial to the F-15’s ability to get home from contested airspace missions, is “on track” and the Air Force is now testing it on six aircraft, Kumar said. The EPAWSS is included in the price of the F-15EX, he said, although it was a program underway before the EX was added to the Air Force’s budget.

Kumar said he’s confident the Air Force will be able to expedite F-15EX testing because so many of the technologies on it, particularly the fly-by-wire system, have already been tested by the Air Force on behalf of Saudi Arabia, whose F-15SAs employ that feature. The Saudi program “looked at 15,000 test points over five years,” he noted. There are no mold line changes, so the main change to be shaken out will be software, he added.

Japan is also looking at a modernization program for its F-15Js that would leverage technologies from the F-15EX, “converting them to F-15JSIs,” Kumar said. The modified Japanese aircraft would be retrofitted with advanced cockpit systems and radar” but not a new fly-by-wire system.