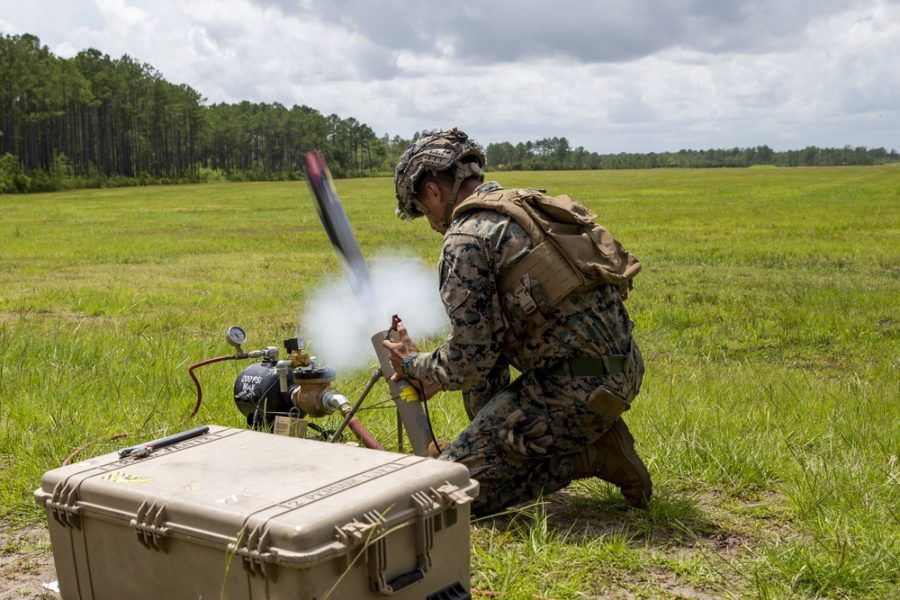 The flat, open lands of the Donbas region of southeastern Ukraine call for a different type of weapon, and the U.S. is responding with more unmanned aerial systems and the training to use them, completing the first seven-day course with Ukrainians on the use of the Air Force’s Phoenix Ghost system.

About 20 Ukrainian soldiers are wrapping up their training on the Air Force’s newest UAS weapon, Phoenix Ghost. Pentagon Press Secretary John F. Kirby declined to say where the training was conducted, how many more trainings may take place, and whether any of the new systems had arrived inside Ukraine. But Undersecretary of Defense for Acquisition and Sustainment William A. LaPlante told journalists May 6 that the weapon was made by the Air Force’s Big Safari office, headquartered at Wright-Patterson Air Force Base, Ohio, which works to quickly develop special-purpose weapons systems.

Wright-Patterson could not immediately respond to a request by Air Force Magazine for comment.

With a $33 billion supplemental before Congress and just $250 million in presidential drawdown authority remaining, the Pentagon is catering to Ukraine’s need for more artillery rather than air defense systems such as Stinger missiles, the Pentagon said May 6.

“We’re focused on providing the Ukrainians in these recent weeks artillery, long range fires,” Kirby said in response to a question from Air Force Magazine.

Kirby said Russia continues to strike Ukraine from the air, though Russian pilots maintain “risk aversion,” choosing to fly the majority of their missions and fire from inside Russian territory. Kirby would not rule out Ukraine’s use of short-range air defenses in Donbas, but he underscored that the type of assistance has changed.

“The gun battles are real, and they’re happening every day from both sides,” Kirby said. “What the Donbas requires are the kinds of capabilities we’re focused on providing the Ukrainians.”

The 7th Army Training Command in Grafenwoehr, Germany, hopes to train Ukrainians on site, and its commander said May 4 that “observers” such as UASs are being used to improve targeting of Russians.

“We are training them on how to use observers, whether they are air-based, or ground-based, or are any other observers, into what they’re doing,” unit commander Brig. Gen. Joseph E. Hilbert told journalists in a telephone briefing.

But the focus on UASs in Ukraine is clear from the manifests of weapons moving quickly to the Ukraine front line.

LaPlante said the April 1 Ukraine Security Assistance Initiative worth $300 million had so for yielded $136.8 million in contracts, including $19.7 million for Puma and $17.8 million for Switchblade UAS systems. DOD has promised some 700 Switchblades to Ukraine, of which about 100 have been delivered.

The biggest-ticket items, however, are communication devices worth $61.4 million and advanced precision kill weapon systems worth $22.6 million, LaPlante said.

Initially slow, the defense production line for some items to support the Ukraine war effort are now “hot,” he added.

“We are in contact with industry every day as our requirements evolve,” said LaPlante, who held a binder with more than 300 proposals from industry offering solutions to quickly deliver weapons to Ukraine. “This is pretty unprecedented, the amount of munitions that are being used right now in the last month.”

In the meantime, U.S. unmanned aerial systems are filling niche needs. “There are lots of UAS systems, and each UAS system does something slightly different,” LaPlante said.

Training courses for Ukrainians wrapped up in recent days as the U.S. continued to deliver American weapon systems that differ from the Soviet-made systems they are used to. As of May 6, more than 220 Ukrainian soldiers had been trained for the M777 howitzer, with another 150 in training. Some 15 soldiers had trained on the MPQ-64 Sentinel mobile air defense radar, and 60 soldiers had trained in the M113 armored personnel carriers, with 50 more soldiers in training.

In recent days, lawmakers have expressed concern that U.S. stocks of Javelin anti-tank weapons and Stinger air defense systems are running out with industrial production capacity lagging behind. LaPlante said the first check has been cut to replace the U.S. munitions, with $3.5 billion set aside from a March 15 supplemental bill. Another $5.4 billion as part of President Joe Biden’s proposed $33.5 billion supplemental bill is now before Congress.

LaPlante said the idea is to replace those items one for one, but evaluations are being made for how to replace older models that are no longer in production.

“It’s one for one to the best you can do or the equivalent of that,” he said.