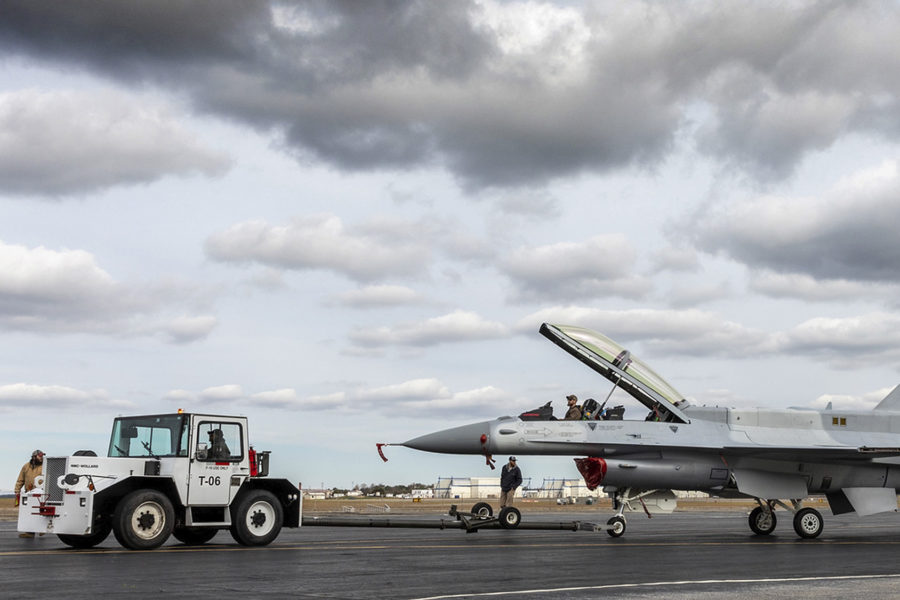 The first F-16 of the Block 70/72 configuration has rolled out of Lockheed Martin’s Greenville, S.C., facility in preparation for first flight early in 2023. The factory is geared up to build at least 128 more of the jets through the end of this decade.

The jet, destined for Bahrain, should be accepted by the U.S. government early in 2023 and will undergo flight testing at Edwards Air Force Base, Calif., before it’s delivered under the Foreign Military Sales program. It completed final assembly and checkout (FACO) and painting at Greenville on Nov. 21.

The rate of work on Block 70s under construction at Greenville will “increase significantly” in fiscal 2023, building to a production rate of up to four aircraft per month, a company spokesperson said. Five countries are on contract for the Block 70/72: Bahrain, Slovakia, Bulgaria, Taiwan, and “one other,” the company noted. Jordan has also signed a letter of offer and acceptance for eight aircraft; when awarded, that contract will bring the backlog to 136 aircraft. Bulgaria has also begun the process of buying additional aircraft. Greenville has “multiple other jets” in various stages of work, a Lockheed Martin spokesperson noted.

The company got an indefinite-delivery, indefinite-quantity contract in January worth up to $64.3 billion for production of new F-16s for FMS customers as well as upgrades of 405 jets in foreign hands to the F-16V configuration, if all potential work materializes.

Lockheed Martin moved its F-16 production line to South Carolina from Fort Worth, Texas, in 2019 in order to free up space there for increasing F-35 production activities. In addition to producing new F-16s, the Greenville plant is performing modifications and refits on older F-16 models. Moroccan F-16s, for example, will get an upgrade to Block 70/72 configuration at the plant. The company said its backlog will ensure production of factory-new F-16s “through the mid-to-late 2020s.”

When Lockheed Martin moved to restart the F-16 line at Greenville, there was an “uptick” in FMS interest in the jet, Col. Anthony Walker, senior materiel leader, international division, at the Air Force Life Cycle Management Center, said in May. A number of countries requested “detailed information and requests for government sales,” he said.

The U.S. Air Force indicated last year that according to its “4+1” fighter roadmap, it plans to keep flying the F-16 well into the 2030s, assuring potential buyers of a strong pipeline for parts and support into the next decade. USAF has indicated it may retain as many as 600 F-16s into the 2030s. The service has also apparently deferred plans to seek a program for a new multirole fighter—not as sophisticated as the F-35—to be called the MR-F or MR-X. That aircraft was expected to have capabilities comparable to those of the F-16.

While Lockheed Martin has tooled for four aircraft a month, “we are always evaluating and looking at ways to increase production to meet customer needs,” the spokesperson said.

“New digital engineering technologies have been implemented into the production line to maximize efficiency and decrease span time. Additionally, we have added more suppliers for certain components, such as our Johnstown, Pennsylvania, facility, to allow us to meet current program needs and future opportunities for new production F-16s,” she said.

The Block 70 is being marketed to countries that either want to expand their existing F-16 fleets or are not customers for the more sophisticated and stealthy F-35 fighter.

The most advanced version of the F-16, the Block 70/72 mounts the APG-83 active electronically-scanned array (AESA) radar, a new electronic warfare suite called Viper Shield, a more powerful mission computer, an updated cockpit with larger color displays—including zoom and the ability to rearrange displayed information—an uprated engine, capability for most modern weapons, conformal overwing fuel tanks and an infrared search-and-track system and targeting pod capability, improved data links, precision GPS navigation, and an automatic ground collision avoidance system (GCAS), among other improvements. The Block 70/72 also has a structural service life of 12,000 hours, about 50 percent longer than previous F-16s, meaning the type could stay in service until 2060 or so.

The U.S. Air Force bought its last new F-16, a Block 50 model, in 2005. Air Force F-16s are getting some of the improvements available in the Block 70, such as the AESA radar, but the service shifted its acquisition focus on new aircraft first to the F-22 and then the F-35. The service has said it will retire all its early-model, or “pre-block,” F-16s in the next few years.

Slovakia is planning to acquire 70 Block 70/72 F-16s, and that country has offered to give a dozen of its retiring MiG-29 aircraft to Ukraine. However, sources have reported that Ukraine has sought to buy F-16s of its own. There has been discussion of providing F-16s from U.S. stocks to Ukraine, but no firm plans have been announced.

The F-16 has been in the U.S. Air Force operational inventory since 1978, when the F-16A entered service. The aircraft is a development of the YF-16 prototype fighter, which won the Lightweight Fighter Competition in 1974. More than 30 countries have since operated the F-16, and 25 are flying some version of the jet today.  More than 4,550 F-16s have been produced.