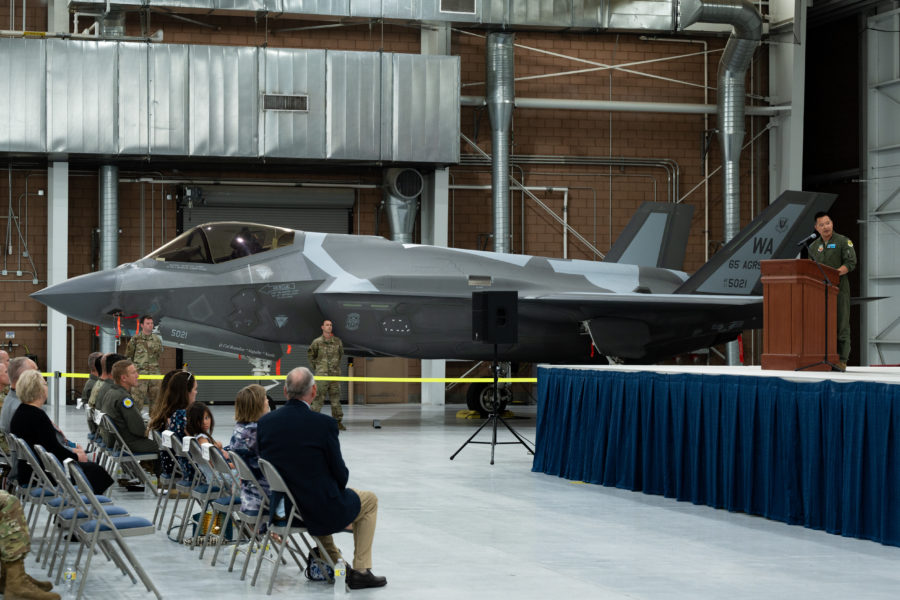 More than three years after the Air Force first announced its intention to reactivate the 65th Aggressor Squadron with F-35 fighters, the unit formally stood up at Nellis Air Force Base, Nev., on June 9.

During the reactivation ceremony, the squadron also unveiled the first F-35s assigned to the unit, painted with a unique pattern of dark and light gray.

Images of the fighter quickly circulated on social media.

“Due to the growing threat posed by [Chinese] fifth and sixth-gen fighter development, we must use a portion of our daily fifth-generation aircraft today at Langley, Elmendorf, Hill, Eielson, and now Nellis, to replicate adversary fifth-generation capabilities,” Kelly said, according to a release. “Precisely because we have this credible threat, when we do replicate a fifth-gen. adversary, it has to be done professionally. That’s the Aggressors.”

The 65th AS will provide USAF with fifth-generation “red air” to replicate the advanced threats posed by other fifth-gen fighters from China and Russia.

“Using the F-35 as an aggressor allows pilots to train against low-observable threats similar to what adversaries are developing,” Col. Scott Mills, 57th Operations Group commander, said in a statement.

The F-35s that will make up the 65th Aggressor Squadron are slated to be non-combat-coded aircraft—original plans called for nine to transfer from Eglin Air Force Base, Fla.

At Nellis, the fifth-gen fighters will help train students at the Air Force Weapons School and also assist in Red Flag exercises, among other exercises and training events. In doing so, they’ll also help train pilots from other services and allies, Mills said.

Officials had previously begun to integrate fifth-generation aggressors at Red Flag 21-3, using F-35s in the exercise alongside F-16s from the 64th Aggressor Squadron, but the 65th AS is the first aggressor squadron equipped with F-35s.