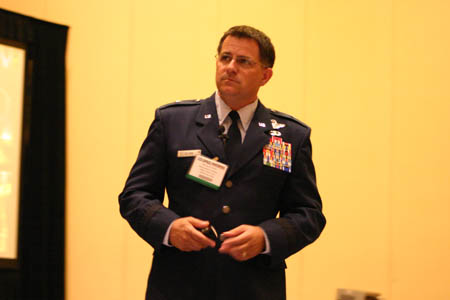 Members of Air Force Special Operations Command are innovating at the unit level and achieving new capabilities, such as pioneering casualty evacuation at sea using CV-22s, said Brig. Gen. Buck Elton, AFSOC’s head of plans, programs, requirements, and assessments. Speaking on Monday at AFA’s 2013 Air and Space Conference in National Harbor, Md., Elton detailed a mission concept—conceived by a group of captains working with counterparts in the Navy SEAL community—in June 2012. A crew launched an Osprey from Cannon AFB, N.M., and flew it to 100 miles off the US East Coast with support from aerial tanking, he said. Upon arrival, the crew performed a hoist medical evacuation from the USS Missouri attack submarine, then returned home—an 11-hour, 2,500-mile trip, he said. The concept helped validate the flexibility of the CV-22 in operations supporting special missions at sea, said Elton. AFSOC is also working hard to improve technology and fixes that increase the time on wing for Osprey engines, reduce brownout conditions, and potentially put a low-cost forward-firing defensive weapon on the platform, he said.