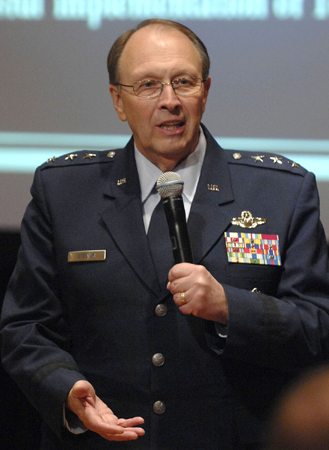 Air Force’s proposed cut of 900 Reservists in Fiscal 2013 is just “the tip of the iceberg” and actually could lead to much more significant losses in experience, said Air Force Reserve Chief Lt. Gen. Charles Stenner. “The personnel losses are in specialties that are still essential to the Total Force, and at the same time, don’t easily transfer to newly assigned mission areas,” Stenner told Senate defense appropriators May 23. For example, an aircraft maintainer tasked with a new mission of becoming a cyber warrior cannot carry over his 17 years of experience overnight, said Stenner. “With that perspective, the Air Force is actually losing the capability of 5,000 to 6,000 experienced and trained personnel, and that loss could seriously affect the strategic reserve posture,” he said. Stenner said he believes that the Active Duty component should act as a “reactionary” force that is “globally fielded in smaller numbers” and “highly responsive,” while “a more robust” Reserve component should serve as a “projection force based on the predictability of steady-state and surge operations.” Finding the right mix would ensure the United States could meet the President’s “reversibility plan” if necessary, he said. (Stenner’s written testimony)