Skip to content
Pilots from the 388th and 419th Fighter Wings taxi F-35As on the runway in preparation for a combat power exercise Nov. 19, 2018, at Hill Air Force Base, Utah. During the exercise, the wings confirmed their ability to employ a large force of jets against air and ground targets, demonstrating the readiness of the F-35 Lightning II. Air Force photo by Cynthia Griggs.
Expand Photo 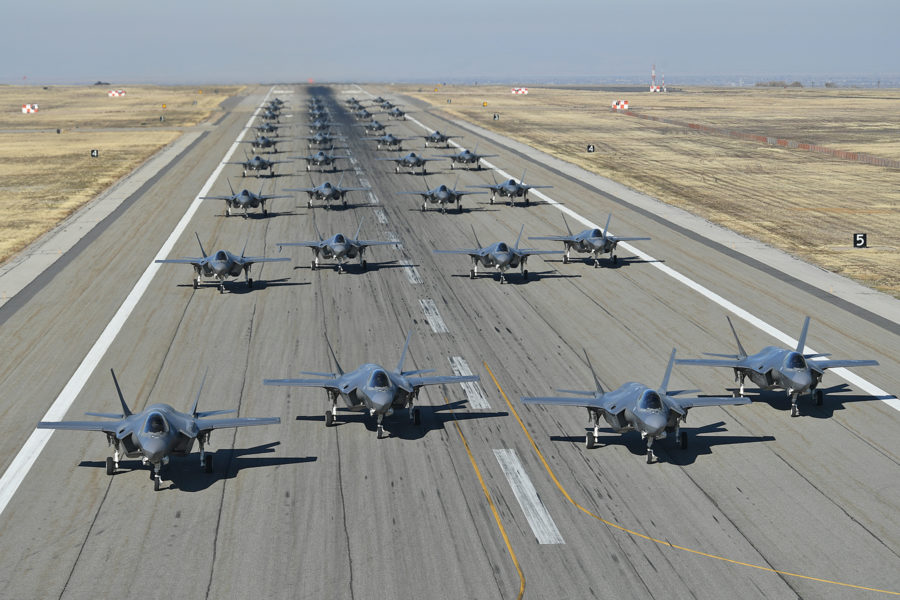 Mission capable rates dropped in 2021 for every Air Force fighter type except the A-10, reversing progress in 2020, according to data released to Air Force Magazine.

The Air Force aims for MC rates between 75 percent and 80 percent on most aircraft, but none stood at that level as fiscal 2021 ended.

The declines are noteworthy even though the Air Force has sought to de-emphasize the rates and instead focus on unit readiness as a more accurate way to evaluate combat capability. Also noteworthy is that 2020’s gains were achieved at the height of the COVID-19 pandemic, when greater restrictions were placed on the physical proximity of workers in backshops and depots.

The F-35A rate declined from 76.07 percent to 68.8 percent from 2020 to 2021 as an increasing number of F-35s came due for their first big engine overhauls. A shortage of engines has grounded about 40 F-35As over the past year, a level that the F-35 Joint Program Office predicts could hold for several years.

With operating costs disappointingly high, the Air Force has throttled back on new F-35A purchases until the more capable Block 4 version is ready and operating costs can be brought down to a more sustainable level. Congress has gone along, with members recognizing that adding airframes has only exacerbated a shortage of parts and made it harder to achieve objective mission capable rates.

The F-15C and D rates also fell. The C model declined to 69.48 percent from 71.93 percent, and the D model fell from 70.52 percent to 68.56 percent. As with the E model, the C and D declines continued a trend dating to 2019, when rates were in the 70s. The Air Force’s F-15C fleet is beyond its planned service life, and the jet is encumbered with numerous operating restrictions and “vanishing vendor” parts shortages.

The stealthy F-22 continued to hover at just over 50 percent, reflecting the fleet’s relatively small size and numerous challenges. The Air Force said the rate was just 50.81 percent in 2021, about one percentage point down from 2020, and just about equal to 2019, when it was at 50.57 percent. The Air Force has chalked up low F-22 MC rates in recent years to challenges caring for the jet’s low observable systems as well as continuing repercussions from severe damage inflicted on about 10 percent of the fleet by Hurricane Michael in 2018. Parts obsolescence is also an issue.

The venerable A-10s are the healthiest, if least capable, jets in the fighter force. Perhaps benefitting from an ongoing re-winging program, the A-10 MC rate ticked up from 71.2 percent in fiscal 2020 to 72.54 percent in fiscal 2021. The A-10 is generally less sophisticated than the other fighters, with fewer sensor systems, and its maintainers are generally more experienced, as most Warthogs belong to the Air National Guard and Air Force Reserve.

When Jim Mattis was Defense Secretary early in the Trump administration, he ordered the Air Force and Navy to raise MC rates for fighter aircraft to 80 percent. The Air Force never achieved that goal, saying at the time that MC rates were not a meaningful indicator of overall readiness for war. A frontline deployed unit typically is close to 100 percent mission capable because parts are prioritized for such units, while squadrons recently returned from deployments can see MC rates decline rapidly.