Skip to content
Audience members who buy a ticket to access the flight line at a Commemorative Air Force AirPower History Tour stop can tour the aircraft, such as the cockpit of the CAF’s Boeing B-29 Superfortress “FIFI,” one of only two airworthy B-29s according to the group. Staff photo by Amanda Miller.
Expand Photo 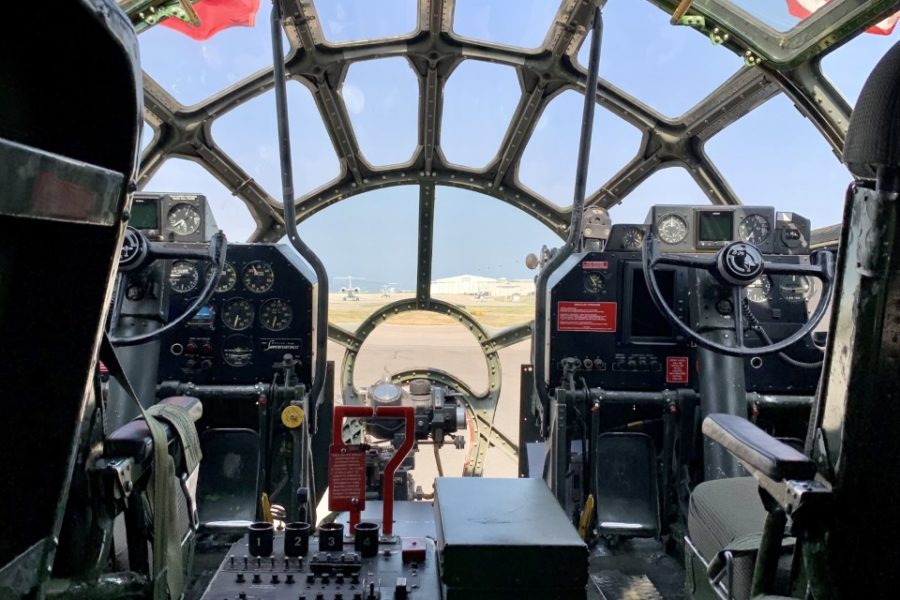 This article was originally published Sept. 1, 2021.

On the eve of the end of one war, a World War II bombardier relived a little of the last day of his own conflict leading up to its anniversary Sept. 2.

Jack Klotz, 96, who served in the U.S. Army Air Forces from 1943 to 1945, was brought out to the flight line at Rocky Mountain Metropolitan Airport in Broomfield, Colo., near Denver on Aug. 29 by his son to see “FIFI,” a Boeing B-29 Superfortress like the ones Klotz flew in during the war.

Based out of Saipan in the Pacific, the B-29 bombardier with the 73rd Wing, 500th Bomb Group, 28th Squadron didn’t keep track of how many missions he flew seated in the glass nose of the cockpit, taking aim with the aircraft’s famed Norden Bombsight.

He turned down a cockpit tour, satisfied, as the tour manager confirmed is often the case when past crew members turn up, to observe from a short distance the activities of getting the old bomber—the same type as the war-ending Enola Gay—up in the air.

Klotz visited on the last day of the Commemorative Air Force’s AirPower History Tour stop at Rocky Mountain. The B-29/B-24 Squadron is one of numerous CAF groups that sell rides on old military aircraft, large and small, and open them up for tours as static displays.

Salvaged from the “boneyard” at Naval Air Weapons Station China Lake, Calif., “FIFI” is one of only two “airworthy” B-29s, according to the CAF’s cockpit tour guides. It was one of the last made and never flew in active service.

Tickets for an hour’s ride range from $1,595 for the bombardier’s seat in the nose—where Klotz sat—to $570 for seats in the rear fuselage. Passengers are allowed to crawl back and forth along the tube connecting the B-29’s fore and aft crew areas.

“FIFI” costs the CAF $10,000 an hour to operate, tour manager Don Boccaccio said. That’s with tour costs including 400 gallons of gasoline and with an all-volunteer crew of six: a pilot, copilot, and flight engineer plus left, right, and aft scanners to eye the wing flaps and so forth and help ensure everything is running right.

“FIFI” headlines the tour—”the queen of the skies,” as Boccaccio puts it—backed up by the Consolidated Aircraft B-24 Liberator “Diamond Lil.”

Klotz thought “FIFI” was fine, but just like on that last day of World War II, he was happiest to point to a P-51 Mustang.

“The last mission we flew, the P-51s didn’t show up for fighter cover,” Klotz recalled, smiling at the memory.

“Pretty soon, here they came, flying every which way—telling us the war was over,” he said.