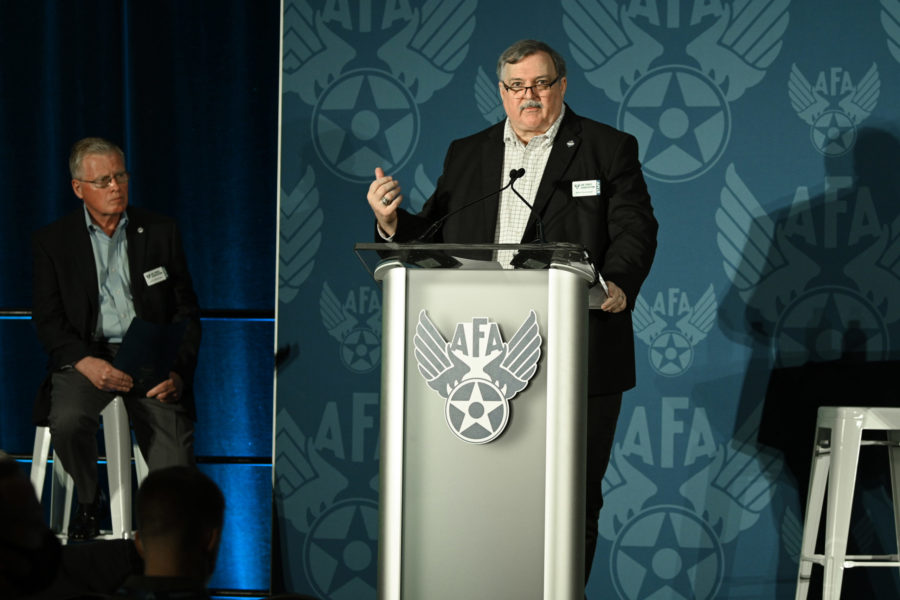 Like their colleagues throughout the Air Force, the service’s top munitions experts hail the potential of cutting-edge aircraft such as the F-35 Lightning II and B-21 Raider. But without enough of the right kind of munitions, they believe, these and other platforms could fall short of their potential when most needed.

“We lack a deep bench of stores for them when it comes to key weapons,” retired Maj. Gen. Larry Stutzriem told a March 3 audience during a panel discussion at the AFA Warfare Symposium.

Stutzreim, who moderated the discussion, is director of research at AFA’s Mitchell Institute for Aerospace Studies. He added that the munitions industrial complex is not large enough to surge production of necessary munitions when crises would demand it.

“This all adds up to the conclusion that it’s time to have a concerted focus on munitions,” Stutzriem said, as he introduced the panel, including John Corley of the Air Force Research Laboratory; and the retired Lt. Gen. David A. Deptula and retired Col. Mark Gunzinger of the Mitchell Institute.

Gunzinger, the institute’s director of Future Concepts and Capability Assessments, alluded to the recent Russian invasion of Ukraine. U.S. and allied forces would have to go on the offensive “within hours—not wait weeks” to build up sufficient force structure before beginning a campaign, he said.

“That means airpower will be the predominant means to rapidly respond from inside and outside the theater, to strike those thousands of targets in hundreds of hours, to blunt an invasion,” Gunzinger said.

Further, Gunzinger described the stockpile of long- and short-range precision-guided munitions (PGMs) as “unbalanced,” thus reducing the number of targets that can be hit.

Deptula, the institute’s dean, added, “the Air Force needs to … move out smartly to develop a new generation of mid-range standing PGMs that cost less than long-range weapons, to help develop the PGM inventory.”

These new weapons should be designed for low observability, Deptula said, and carry other features designed to penetrate advanced integrated air defense systems.

“The threat of pure conflict today is real,” Corley said.

While Operation Desert Storm involved some 45,000 aim points, a conflict with China or Russia could entail 100,000 or more, Corley said.

“Do we have the number of weapons on hand to deal with [that] magnitude of threat? No, we don’t have the capacity to … generate that number of weapons in a matter of weeks. So we need to start stockpiling more munitions with the capabilities that we desire,” Corley said, adding that digital engineering would help meet the demand quickly and at a realistic price.

Gunzinger closed his remarks with a warning.

“We can have the best fifth- and sixth-gen Air Force in the world. We can have the largest bomber force in the world, and we can have NGADs [Next Generation Air Dominance fighters] out of our ears,” Gunzinger said. “If they don’t have weapons, that does not translate into combat power. And Gen. Deptula is exactly right. The time to buy these weapons is now.”