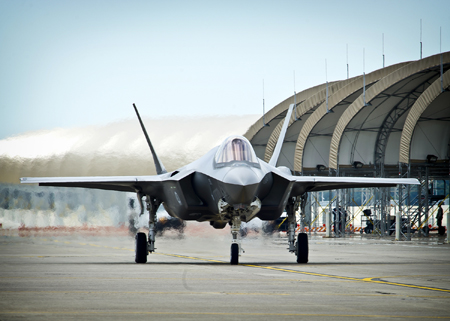 F-35 joint program office last week suspended all F-35 flight operations as a precautionary measure. The move came after a routine engine inspection revealed a crack on a blade of an F-135 engine installed on AF-2, an Air Force F-35A test airplane operating at Edwards AFB, Calif., according to the Defense Department’s Feb. 22 release. The flight suspension affects all three F-35 variants: the F-35A, Marine Corps’ F-35B, and Navy’s F-35C. The fleet will remain on the ground until an investigation is complete; F135 supplier Pratt & Whitney will conduct an investigation of the affected engine’s turbine module at its facility in Middletown, Conn., states the release. The JPO is working with Pratt & Whitney and F-35 prime contractor Lockheed Martin “to return the fleet safely to flight as soon as possible,” states the release. The grounding comes on the heels of the JPO on Feb. 12 giving the green light for the F-35Bs to return to flight following an investigation into why an engine hose malfunctioned during an F-35B training sortie in January.