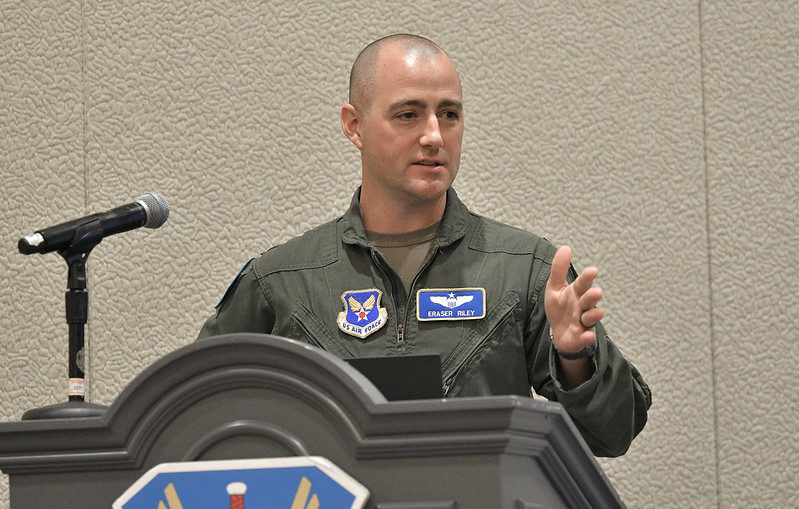 The Anthony C. Shine Award is given annually to a USAF fighter pilot major or below who most exemplifies the character, professionalism, and tactical proficiency of the award’s namesake. Shine flew more than 100 combat missions before his A-7 disappeared beneath a cloud covering the border of North Vietnam and Laos in 1972. He was declared missing in action, and, for the next 24 years, his wife and three children carried “the painful burden of uncertainty,” said Colleen Shine, who was 8 years old when her father vanished.

Colleen Shine’s determination to learn her father’s fate and bring peace of mind to her family led her on three trips to Vietnam after the war. Eventually, she was connected with someone who discovered pieces of his aircraft and a helmet bearing his name. The breakthrough reignited government searches, and in 1996, his remains were unearthed and repatriated to U.S. soil and buried at Arlington National Cemetery.

Bonnie Shine established the Anthony C. Shine Award in 1980. The award requires final approval by the Chief of Staff of the Air Force and is presented by the recipient’s major command commander.

“Eraser [represents] the core values of our Air Force energy,” Kelly said before the award was presented. Shine’s “legacy will continue. I guarantee you, Colleen Shine and the team at ACC will make sure we continue honoring these aviators for years to come.”

Riley’s credits include being the deployed director of operations for the largest F-35 combat deployment to date, where he led 434 Airmen and 18 F-35 Lightning IIs supporting four bases and three areas of responsibility. He led 79 combat missions and employed 21 weapons in contact with enemies in Iraq, Syria, and Afghanistan. At home, Riley participated in community events in which his squadron promoted the Air Force mission with more than 1,000 civilians.

Colleen Shine said the award recognizes not just remarkable pilots, but remarkable people. “Reading through Eraser’s nomination package,” she said, “I was awed by the phenomenal amount of responsibility he’s had in leading and executing a myriad of combat missions, managing risks quickly and effectively, then using that experience to create guides and combat survival launch plans that ensure others can live to fly and fight another day—this formidable fighter pilot recognizes what it means to serve someone bigger than himself.”

Riley is now a Combat Air Force Fellow at Headquarters Air Force in Washington, D.C. He thanked his leadership, family, and wife, as well as numerous members of the Shine family who gathered for the award.