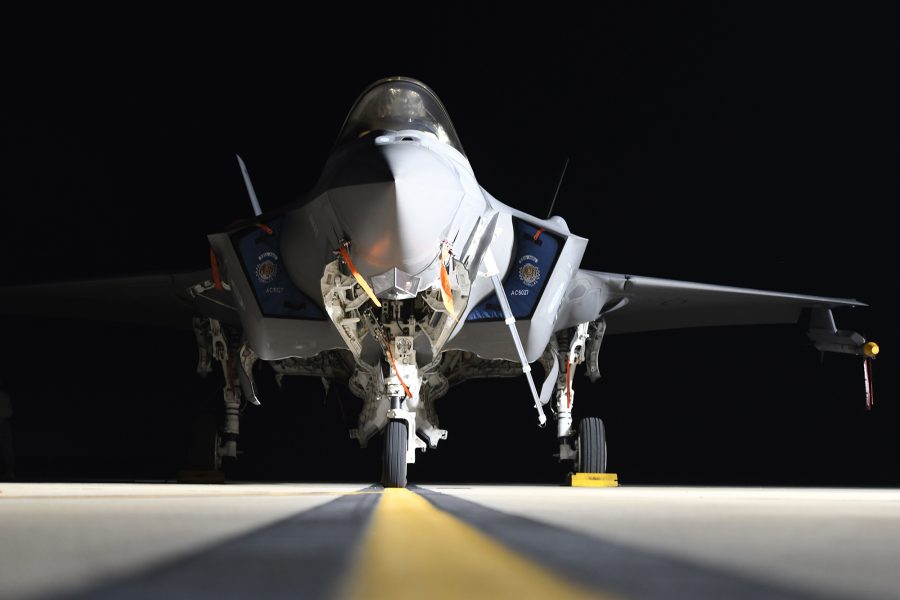 Mission capable rates have jumped for all variants of the F-35 over the past year, Pentagon acquisition and sustainment chief Ellen Lord told a panel of the House Armed Services Committee on Nov. 13. The improvement came even as the size of the fleet expanded considerably, she said.

“As the F-35 fleet has grown, aircraft readiness has improved,” Lord said in prepared testimony for the HASC readiness subcommittee. The fleet—now 458 airplanes across the US services and international partners and customers—grew 50 percent larger in 2019 than it was a year ago, and the F-35 enterprise “is on track to produce 150 percent more aircraft than we built two years ago.”

Across the US fleet, mission capable rates—the metric that shows how many aircraft in a fleet are available for action at any given time—“increased from 55 percent in October 2018 to 73 percent in September 2019,” she wrote. Marine Corps F-35B readiness leaped from 44 percent to 68 percent during that period, Air Force F-35A jets improved from 66 percent to 75 percent, and Navy jets, which only became operational this year, are over 75 percent mission capable, Lord asserted.

She and F-35 Joint Program Office officials have in recent months touted an increased availability of parts as the key element in the improved readiness of the fleet, which is still not quite hitting the 80 percent mission capable rate mandated by former Defense Secretary Jim Mattis a year ago.

In addition to more spare parts, Lord said there 161 reliability and maintainability improvement projects that have been identified and “68 completed.” The rate at which jets are not mission capable because of a lack of parts has dropped by five percent in the last year, she said. Mission capable rates are also affected by other factors, such as software stability, which are not parts-dependent.

Another big driver in readiness improvement has been, and will be, “accelerating the activation of organic depot repair capacity.” The target for full organic repair capability has been moved up from 2030 to 2024, but “by the end of this year, 30 of 68 depot repair lines will be activated, one more” than the Pentagon’s previous forecast.

The Government Accountability Office earlier this year noted that it was taking too long to fix parts at depots, but Lord said that process has been sped up.

“We have also reduced total repair time of parts by 13 percent and are working the continued implementation of performance-based agreements and master repair agreements with our industry partners,” she reported.