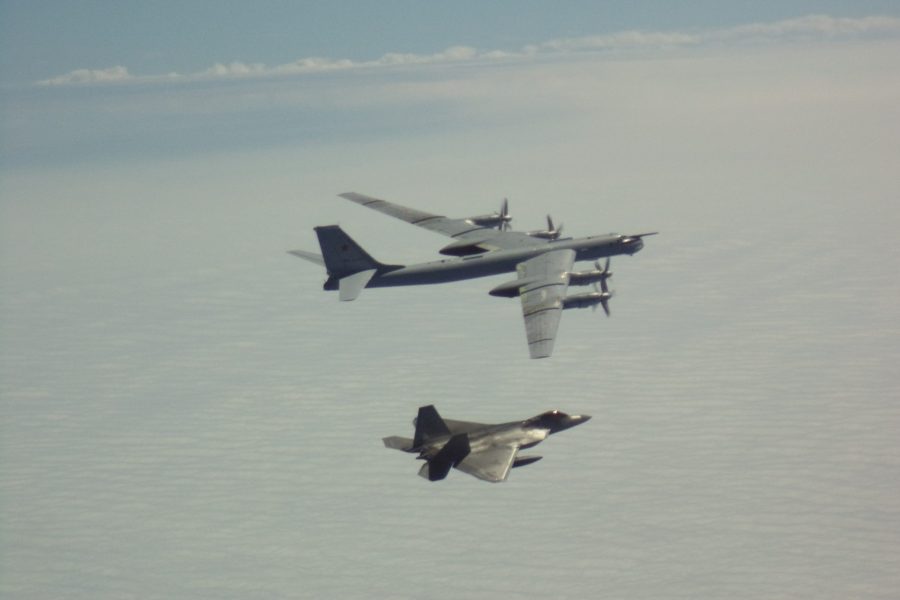 U.S. Air Force F-22 Raptors, with help from KC-135 Stratotankers and an E-3 Airborne Warning and Control System, intercepted two separate Russian bomber formations off the Alaskan coast on the morning of June 10.

The first was composed of two Tupolev Tu-95 bombers, two Sukhoi Su-35 fighters, and a Beriev A-50 airborne early warning and control aircraft, and flew “within 20 nautical miles of Alaskan shores,” North American Aerospace Defense Command said in a release. The second formation was made up of a pair of Tu-95s and an A-50, and got within 32 nautical miles of the coast, it added.

NORAD aircraft intercepted the Russian aircraft as they traveled into the Alaskan Air Defense Identification Zone, but they never entered sovereign American airspace, the command noted.

The Russian Defense Ministry on June 10 uploaded a video to YouTube purportedly depicting scenes from “a planned 11-hour flight” of its Tu-95MS aircraft “over the neutral waters of Chukchi, Bering, and Okhotsk seas, as well as the northern part of the Pacific Ocean.” While the video caption didn’t indicate the date of the flight, the presence of USAF F-22s in the footage suggests these could’ve been the same bombers that were intercepted by NORAD.

The NORAD intercepts and Russian flight come less than two weeks after Russia sent Su-27P and Su-30SM fighters to intercept USAF B-1B Lancers “in neutral waters” in response to a May 29 Bomber Task Force training mission over the Black Sea region.

“Intercepting multiple Russian aircraft demonstrates NORAD forces’ readiness and capability to defend the homelands 24 hours a day, 7 days a week, 365 days a year,” command boss Air Force Gen. Terrence O’Shaughnessy said in the release. “Flying air patrols protects the approaches to our nations and sends a clear message we continue executing our homeland defense missions with the same capability and capacity we always bring to the fight.”

The NORAD events also come in the wake of at least two previous European intercepts of Russian aircraft in 2020.

On March 7, the Norwegian Air Force dispatched aircraft, including F-35As, to intercept Russian aircraft traveling “further south into the so-called GIUK gap (Greenland-Iceland-UK) than normal,” The Barents Observer reported at the time. The same day, the Royal Air Force deployed Typhoon fighters to intercept Russian aircraft that were flying near UK airspace, The Aviationist reported.