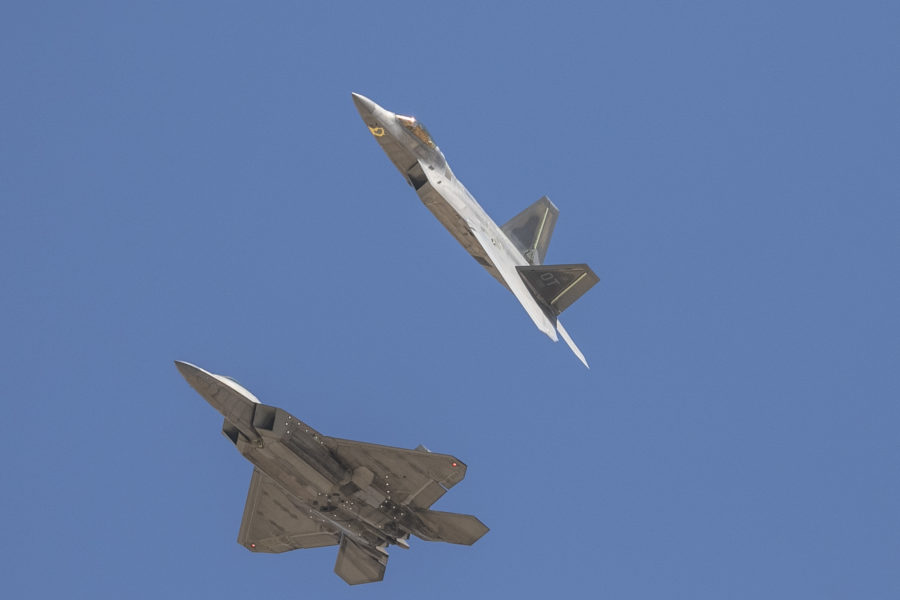 F-22 fighters at Edwards Air Force Base, Calif., ran third-party software during a test flight Aug. 24, a first for the Air Force’s fifth-generation fighters and a key milestone in the service’s quest to acquire and rapidly deploy cutting-edge technologies.

In order to run the third-party software, the ACC Federal Laboratory and software developers from the 309th Software Engineering Group developed an Open Systems Enclave, a government-owned software architecture that can integrate new apps “from first line of code to flight in less than 60 days,” the press release states. It did not specify what or how many third-party software programs ACC has flight tested, and ACC did not immediately respond to an inquiry from Air Force Magazine.

Still, the deployment of any third-party apps on an F-22 has the potential to shake up how the Air Force fields upgrades and capabilities for its most advanced fighters.

Traditionally, platforms such as the F-35 and F-22 have required software designed specifically for that aircraft, and updates have often been tied to hardware upgrades that can take years to develop.

An open architecture and software that allows apps to run across different systems, however, “fundamentally changes how we can deliver combat capability to the warfighter,” Maj. Allen Black, F-22 test pilot and project co-lead, said in a statement. “We’ve proven the ability to rapidly evaluate and integrate next-generation technologies developed by experts in government, industry, and academia at a lower cost with software portability across defense platforms.”

Black has been pursuing the idea of portable third-party software for fifth-generation fighters for some time—his “Project FoX (Fighter Optimization Experiment)” was selected as a finalist in the Air Force’s annual Spark Tank competition in October 2021.

Project FoX envisioned a so-called “Pentagon App Store,” whereby developers could create software to run on any number of platforms, and operators could download and run those apps on a commercial off-the-shelf tablet data-secured to the aircraft.

Ahead of the final ceremony in February 2022, Black said his team’s goal was to demonstrate the new approach in the next few months, using an app developed and tested on the F-35 that assists with the evasion of enemy surface-to-air missiles on an F-22, with no redevelopment.

Separating software and hardware development for fighters allows for new programs to develop and deploy quickly, which has been a goal of DOD leaders and software developers for years now. Critics say the Pentagon’s lengthy acquisition process means software systems are frequently outdated by the time they’re finally fielded and that the process needs to be more streamlined and iterative to allow for regular updates.

The success on board the F-22 is already leading to changes. The chief of F-22 requirements has established a formal requirement for the establishment of the open systems enclave on the fighter, and the team behind the test is evaluating “several candidate combat capabilities as cross-platform solutions,” the release states.

“We must build an enduring advantage for our force,” Gen. Mark D. Kelly, ACC commander, said in a statement. “This ‘bring the future faster’ initiative allows us to rapidly discover and iterate on combat capabilities and stay relevant with cutting-edge technology and affordably accelerate change in delivering combat Air Force capabilities as an enterprise.”