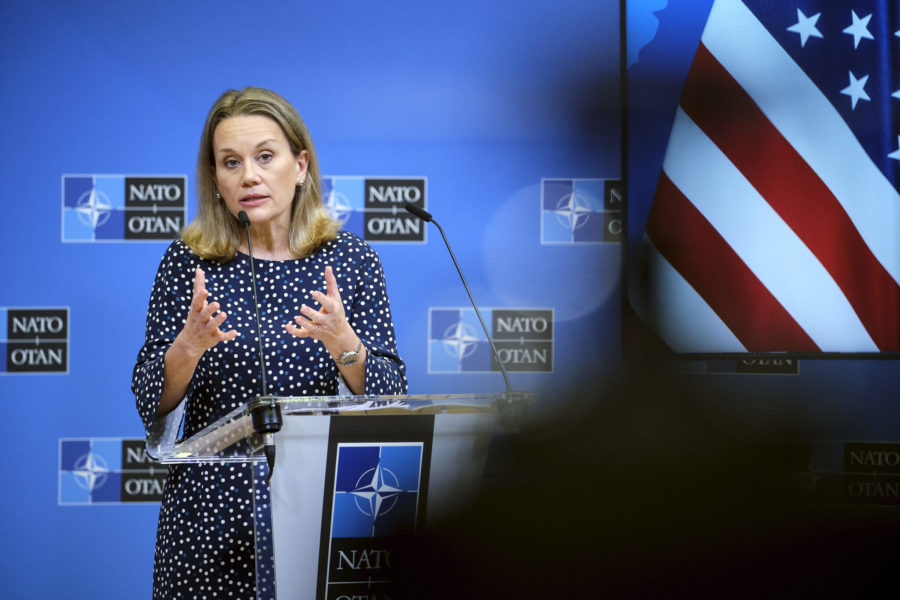 F-16s Not on the Table for Ukraine, Says NATO Ambassador

When asked by Air Force Magazine whether the United States or alliance members have discussed transfer or training for American aircraft like F-16s, Smith simply stated, “No.”

While Smith said she relies on the Defense Department for detailed, regular talks with the Ukrainian Defense Ministry about Ukraine’s battlefield needs, she affirmed that the prospect of a prolonged conflict between Russia and Ukraine has not changed partners’ willingness to provide aircraft to Ukraine.

President Joe Biden argued in a New York Times editorial June 1 that his decisions regarding which weapons to transfer to Ukraine were motivated by giving Ukraine the strongest hand at the negotiating table, not weakening Russia.

“We want to see a democratic, independent, sovereign, and prosperous Ukraine with the means to deter and defend itself against further aggression,” the President wrote.

“We have moved quickly to send Ukraine a significant amount of weaponry and ammunition so it can fight on the battlefield and be in the strongest possible position at the negotiating table,” Biden said. “We do not want to prolong the war just to inflict pain on Russia.”

After several weeks of consideration, Biden used the editorial to argue why he approved the transfer of the advanced rocket system High Mobility Artillery Rocket System (HIMARS), but with limited ranges and guarantees from the Ukrainian government that they would not be fired inside Russia’s borders.

The official said even the discussion of transferring Soviet-era fighters like the MiG-29s used by the Ukrainian Air Force is all but dead.

“There is less talk about the supply of post-Warsaw Pact airframes,” the official said. “There are other ways to sustain the [Ukrainian] Air Force.”

In March, Poland offered to give roughly two dozen MiGs to the United States to transfer to Ukraine in exchange for “used aircraft with corresponding operational capabilities,” but the United States refused. U.S. European Command chief USAF Gen. Tod D. Wolters argued that transferring the aircraft would be “escalatory.”

At the April 29 meeting of the Ukraine Defense Contact Group at Ramstein, U.S. Air Forces in Europe commander Gen. Jeffrey L. Harrigian assured Air Force Magazine that air power conversations were part of the discussions hosted by DOD with over 40 nations in attendance.

However, Harrigian said providing Ukraine with American F-16s was “not a recipe for success.”

“Clearly, they want to migrate from Russian capabilities to U.S., but that takes some time,” he said.

“It should be a decision taken by all [the] alliance, the NATO alliance,” Błaszczak said during a pull-aside interview before the start of the Ramstein meeting.

In a joint press conference with Secretary of State Antony Blinken and Defense Secretary Lloyd J. Austin III at the State Department on June 1, NATO Secretary-General Jens Stoltenberg said the alliance will continue to invest in Ukraine.

“The alternative—not to support Ukraine—that would actually enable President Putin to win,” Stoltenberg said. “That would be dangerous for all of us, and the price we’d have to pay would actually be higher than to now invest in the support for Ukraine.”

In her meeting with reporters the same day, Smith said the type of weapons provided to Ukraine are tied to real-time battlefield needs.

“In terms of the evolving nature of the assistance. I mean, all of us, NATO allies, the NATO Secretary General, the U.S. Secretary of Defense, are in constant contact with the Ukrainians,” she said.

“We’ve seen an evolution in terms of what’s been provided,” she said. “It reflects the evolution of the war, of the situation on the ground, of the Ukrainians own internal debates about what is needed in this moment.”