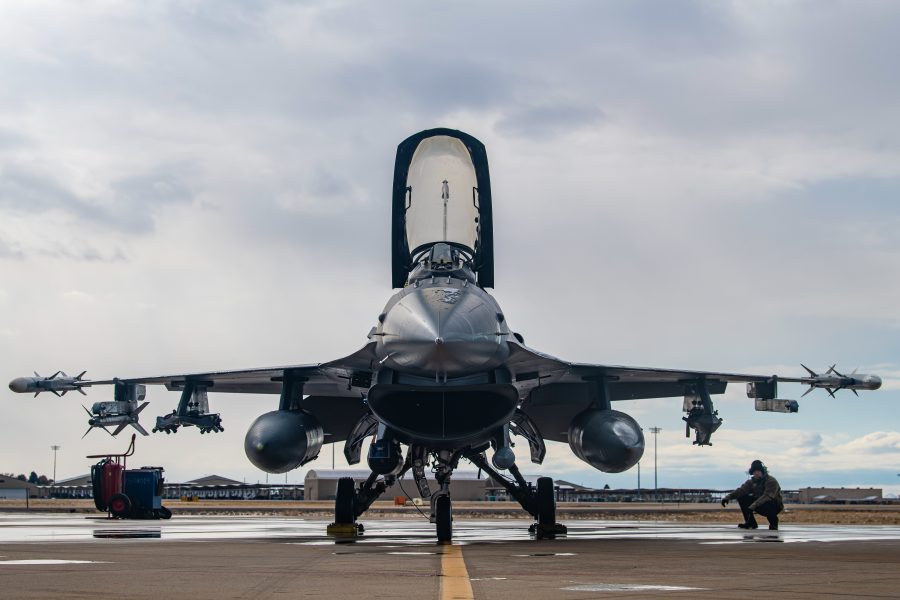 Based on Lockheed Martin’s backlog of F-16 orders, planned upgrades, and the recent revelation that the Air Force plans to  depend on the fighter into the late 2030s, the F-16’s sunset years now could come in the 2070s, or later.

Lockheed Martin’s backlog of 128 F-16s—all for foreign military sales—won’t all be delivered until 2026, and the company anticipates more orders may be coming. With a potential service life of 40 years or more, those jets could be flying into the late 2060s or later. The type first entered service in the 1970s.

“There are 25 nations operating F-16s today,” said Col. Brian Pearson, Air Force Life Cycle Management Center lead for F-16 FMS, in a May 17 press release. Lockheed’s Greenville, S.C., F-16 manufacturing and upgrade facility, which will start turning out new F-16s in 2022, “helps us meet the global demand” for F-16 aircraft, he said. Lockheed moved its F-16 work from Fort Worth, Texas, in 2019 to make room there for expanded F-35 production.

The 128 jets are for Bahrain, Bulgaria, Slovakia, Taiwan, and another country the company declined to name, although Croatia and the Philippines have been mentioned as customers. These aircraft will be in the Block 70/72 configuration, which includes new radar, displays, conformal fuel tanks, and other improvements over the Block 50/52 version, the most recent flown by USAF. Lockheed is building F-16s at a rate of about four per month at Greenville.

India is also considering buying an advanced F-16 version Lockheed has dubbed the “F-21,” which Lockheed touts as having a 12,000-hour service life; roughly 50 percent more than the ones the USAF flies. At normal utilization, 12,000 hours is about 32 years of service. India would produce those jets indigenously. India is looking to buy 114 fighters, and Lockheed is partnered with Tata to build the jets if it wins the competition.

Gregory M. Ulmer, Lockheed’s vice president for aeronautics, told reporters in February the company sees a potential for 300 additional F-16 sales not yet on the books, some of which will be to “repeat” customers.

The increased foreign interest may be related to the USAF’s hints over the last two years that it will continue to fly the F-16 beyond previous plans, thus reassuring customers that the parts and support pipeline for a large number of aircraft will persist.

Those hints turned more concrete in recent days. Talking points drawn up for USAF Chief of Staff Gen. Charles Q. Brown Jr. about the service’s future fighter force plans, obtained by Air Force Magazine, indicate the Air Force expects that “600+ late-block F-16s will provide affordable capacity for the next 15+ years,” in both competitive and permissive combat environments. These aircraft will in fact be the USAF’s “capacity force,” the documents say, and will serve as a “rheostat,” meaning their total number can be adjusted up or down depending on the success of the F-35 program and a separate F-16 replacement now known as the Multi-Role-X.

The Air Force considers “competitive” to mean airspace that is reasonably well defended by aircraft and surface-to-air systems. “Highly competitive” and “denied” airspace would only be penetrable by fifth-gen and sixth-gen aircraft with extremely low observable qualities.

Although the fiscal year 2022 budget request, to be released May 28, will reveal some details of the Air Force’s new force structure plans, Brown said at the recent McAleese and Associates defense conference that the meat of the plan will be spelled out in the fiscal ’23 budget.

In the near-term, the USAF plans the divestiture of all the F-16 “pre-blocks” of aircraft, meaning all those that remain in its inventory of the Block 15-25-30 versions.

Lockheed received an indefinite-delivery, indefinite-quantity contract in January worth up to $64.3 billion for production of new F-16s for FMS customers, as well as upgrades of 405 jets in foreign hands to the F-16V configuration, which is similar to the F-21 model proposed to India. These modifications will include “new radar and other upgrades to make them similar to the aircraft that will come off the production line,” AFLCMC’s release said.

The large omnibus contract creates a baseline F-16 configuration for all future production, with the Air Force acting as the agent for FMS customers. Each country will sign a separate contract for unique or custom equipment they want on their particular jets. An Air Force official said the arrangement “simplifies and accelerates” the FMS process for countries wanting to buy the F-16, “so we can get it into their hands faster than has been the case in recent years.” The approach is needed because of the increased expected demand for the airplane, he said. It also reduces the cost of the jet by allowing vendors to make larger, more economic quantities of parts and structural components. The work will also integrate the Joint Mission Planning System/Mission Planning Environment software update.

Japan flies an F-16 variant, called the F-2, but it performs all work on that type.

More than 4,550 F-16s have been delivered to the U.S. and allied countries since the 1970s. The late Michele A. Evans, Ulmer’s predecessor as Lockheed VP for aeronautics, said in September 2020, the company sees a possibility “of getting up to 5,000” F-16s built. She also said the company views the F-16 as an entrée to its F-35, for countries that are not yet ready to adopt the fifth-generation fighter, but may wish to later.

Brig. Gen. Dale R. White, the USAF’s program executive officer for fighters and advanced aircraft, called the F-16 an “enduring, highly capable compact fighter that will have a large role in many partner nations’ security for years to come.”