Skip to content
U.S. Air Force F-16 Fighting Falcon fighter jets from the 480th and 510th Expeditionary Fighter Squadrons are parked on the aircraft ramp at the 86th Air Base, Romania, following the 510th EFS’ arrival April 29, 2022. The 480th EFS from Spangdahlem Air Base, Germany, is being replaced by the 510th EFS from Aviano Air Base, Italy, after being deployed to Romania since February. U.S. Air Force photo by Tech. Sgt. Maeson L. Elleman
Expand Photo 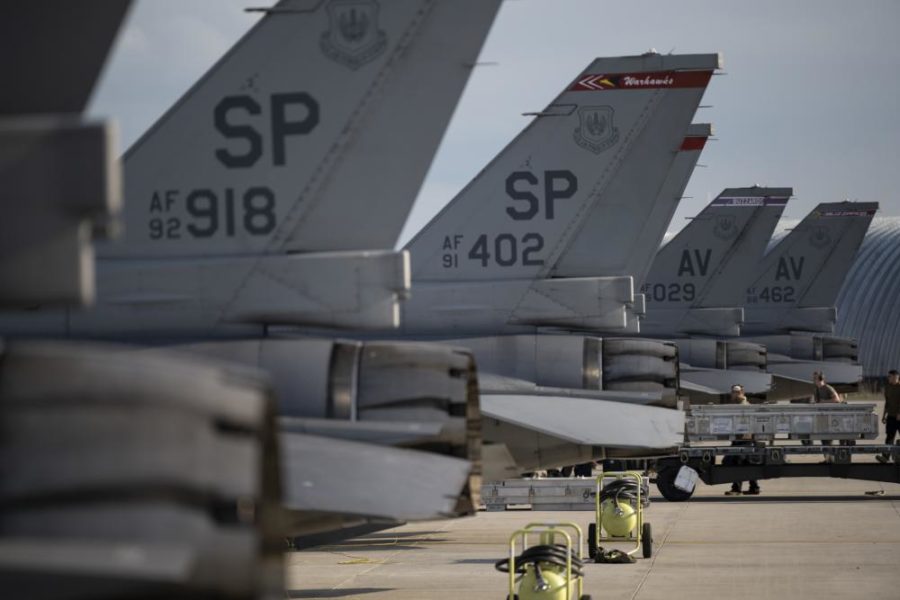 Half a dozen F-16s from the 510th Expeditionary Fighter Squadron at Aviano Air Base, Italy, arrived in Romania on April 29, replacing similar fighters from the 480th EFS that had rapidly deployed to support NATO’s enhanced air policing mission and to deter Russian aggression.

The Aviano jets replace the F-16 Fighting Falcons from Spangdahlem Air Base, Germany, in the enhanced air policing mission. Spangdahlem’s jets first arrived at Fetesti Air Base, Romania, three months ago as Russia built up its forces around Ukraine and tensions escalated along NATO’s eastern flank.

“The continued presence of U.S. F-16s in the south-east region ensures critical capability for the Air Policing mission and strengthens NATO’s collective readiness,” Gen. Jeffrey L. Harrigian, U.S. Air Forces in Europe commander, said in a statement. “Our ability to operate shoulder-to-shoulder with our regional Allies bolsters our collective defense and interoperability across the Eastern flank.”

While in Romania, the Aviano F-16s and crew will work closely with their Romanian counterparts as well as with Italian Typhoons that have been flying in the area since December 2021, according to a USAFE press release.

In addition to Romania, the U.S. has also deployed F-15s and F-35s to Poland in recent months. As Russia’s invasion of Ukraine has unfolded, Russian fighter jets have increasingly tested NATO air space, causing NATO aircraft to scramble in response. U.S. Air Force F-16 Fighting Falcon maintainers from the 510th Expeditionary Fighter Squadron out of Aviano Air Base, Italy, exchange squadron hand signs with an F-16 pilot from the 480th EFS as he taxis his jet for takeoff from the 86th Air Base, Romania, April 30, 2022. Aircraft and personnel from the 510th EFS arrived at Fetesti Air Base, Romania, on April 29, 2022, to replace members of the 480th EFS in order to continue supporting NATO’s Enhanced Air Policing. U.S. Air Force photo by Tech. Sgt. Maeson L. Elleman A U.S. Air Force F-16 Fighting Falcon fighter jet maintainer from the 510th Expeditionary Fighter Squadrons performs post-flight maintenance on a 510th EFS F-16 at the 86th Air Base, Romania, following the 510th EFS’s arrival April 29, 2022. The 480th EFS from Spangdahlem Air Base, Germany, is being replaced by the 510th EFS from Aviano Air Base, Italy, after being deployed to Romania since February. U.S. Air Force photo by Tech. Sgt. Maeson L. Elleman U.S. Air Force Staff Sgt. Scott Rimbach, 480th Expeditionary Fighter Squadron electrical and environmental systems journeyman, tapes a shipping manifest to a cargo pallet at the 86th Air Base, Romania, April 29, 2022. The 480th EFS, which has been conducting NATO Enhanced Air Policing operations from Romania since February, is redeploying to Germany and being replaced by the 510th EFS from Aviano Air Base, Italy. U.S. Air Force photo by Tech. Sgt. Maeson L. Elleman