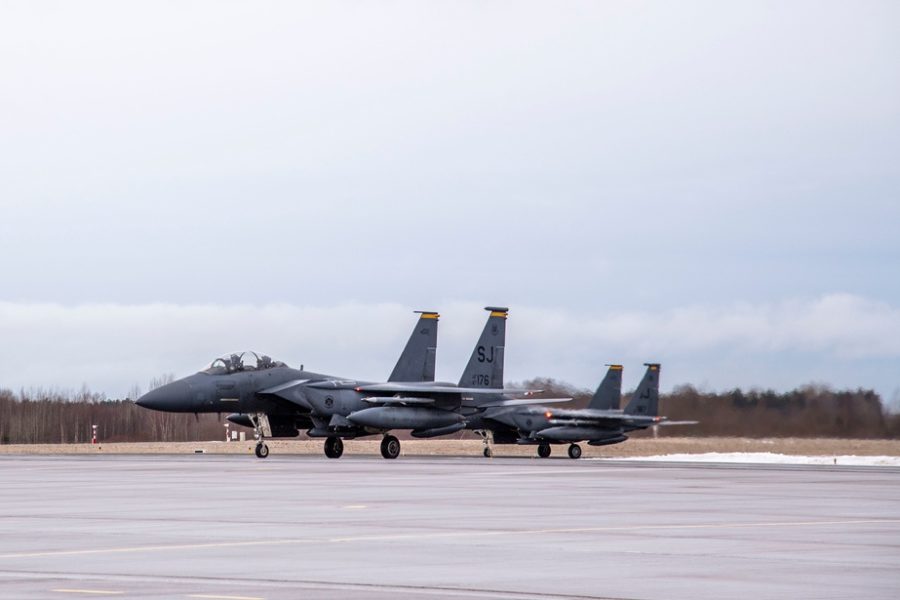 Half a dozen U.S. Air Force F-15Es landed in Estonia on Jan. 26 to aid NATO’s enhanced air policing mission, as tensions in Eastern Europe continue to simmer over a potential Russian invasion of Ukraine.

While in Estonia, the American fighters will integrate with a detachment of Belgian F-16s, NATO Allied Air Command said in a press release. In addition to working on the enhanced air policing mission, they will also work with NATO allies in the Baltics to practice air-to-air and air-to-ground maneuvers, the release said.

The six F-15E Strike Eagles are assigned to the 4th Fighter Wing from Seymour Johnson Air Force Base, N.C, the Air Force noted in releasing photos of the fighters landing at Amari Air Base, Estonia.

The photos also showed Airmen from the 4th Fighter Wing and the 48th Fighter Wing from RAF Lakenheath, England, arriving in a C-130J on Jan. 24 to support the mission.

“Baltic and enhanced Air Policing are enduring NATO missions that deliver constant vigilance of Allied airspace and contribute to the Alliance’s collective defense posture,” Maj. Gen. Jörg Lebert, Chief of Staff of Headquarters Allied Air Command, said in a statement. “The additional aircraft will work closely with the current detachments to increase our readiness, build crucial interoperability, and underline the robust solidarity across the Alliance.”

NATO’s air policing mission is focused on monitoring for “airspace violations, suspicious air activity close to the alliance’s borders, or other kinds of unsafe air traffic,” with fighters being tasked to scramble in response to any threat.

Reuters, citing an official at Amari Air Base, reported that the U.S. fighters will be deployed “until the end of next week”—Feb. 4 or 5.

The deployment of the F-15Es comes just two weeks after the Air Force sent F-16s to Poland en route to Lithuania and Estonia to train with Eastern European allies on air policing. At the time, U.S. Air Forces in Europe stressed in a statement that the deployment was “long planned.”

Still, the deployments come at a time when any military activity in the region is sure to garner interest. Russia has maintained a troop presence of some 100,000 along the Ukrainian border for months now, with sophisticated air force and anti-access/area denial (A2/AD) capabilities that experts believe would allow for a swift invasion.

President Joe Biden has said he will not send any American troops to Ukraine itself, but Defense Secretary Lloyd J. Austin III recently ordered 8,500 troops in the continental U.S. to prepare to deploy to Europe for a potential Ukraine contingency within five days. Biden has also sought to warn Russia off a potential invasion, threatening a “heavy price” for Russian President Vladimir Putin if he does so.

At the same time, NATO allies along the eastern flank have clamored for an increased U.S. presence in their countries—Estonian Prime Minister Kaja Kallas, Lithuanian Prime Minister Ingrida Šimonytė, and Romanian President Klaus Iohannis have all indicated a willingness to host more troops in the past few months. Members of the Estonian Air Force unload cargo from a C-130J Super Hercules, assigned to the 86th Airlift Wing from Ramstein Air Base, Germany, at Ämari Air Base, Estonia Jan. 24, 2022. Ämari Air Base is hosting the Belgian and U.S. Air Forces to conduct an enhanced air policing mission for NATO. Enhanced air policing was introduced in 2014 with the goal of assuring north eastern and south eastern allies, demonstrate the collective resolve of allies and demonstrate the defensive nature of NATO to deter adversaries from aggression or the threat of aggression against NATO allies. U.S. Air Force Photo by Staff Sgt. Megan Beatty
Air
National Security
Expand Comments