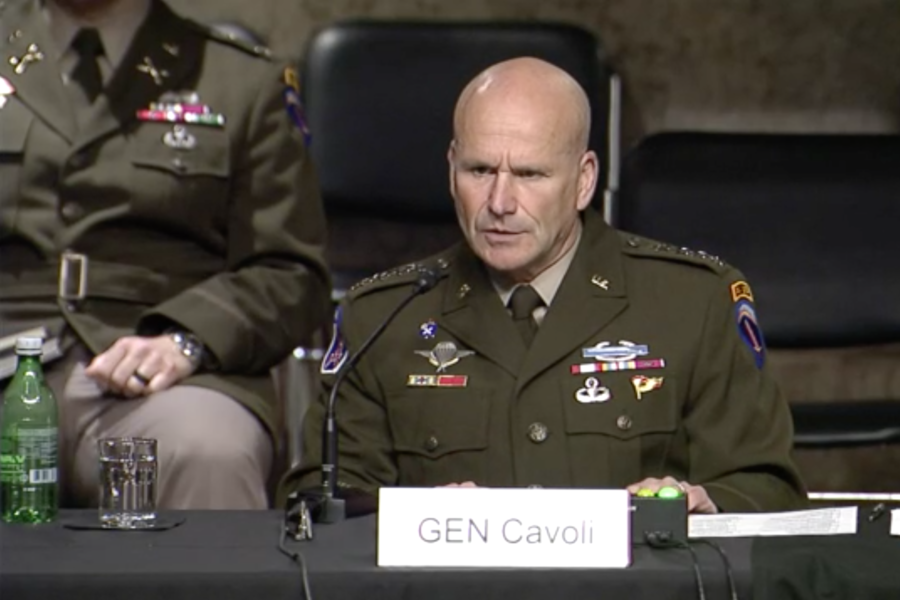 EUCOM Nominee: European Deterrence Initiative Has Been as Vital as ‘Oxygen’

Over the past several years, the Pentagon has dedicated nearly $30 billion in funding to the European Deterrence Initiative, helping to bolster the U.S. military’s posture and flexibility in the region to respond to Russian aggression.

In that time, the initiative has become “absolutely vital” to U.S. forces in Europe, the potential next boss of U.S. European Command and Supreme Allied Commander Europe told lawmakers on May 26—and he wants to expand its impacts to include an Air Force effort that has fallen off the radar for some.

Army Gen. Christopher G. Cavoli currently serves as commander of U.S. Army Europe-Africa and has a long history in the EUCOM area of responsibility. And in his confirmation hearing before the Senate Armed Services Committee, Cavoli gave the EDI a strong endorsement, especially as Russia’s war with Ukraine drags on.

“The European Deterrence Initiative has not just been important, it’s kind of been like oxygen to us for several years now,” Cavoli told senators. “It’s the thing that allows us to do all of the exercising, to build all of the infrastructure, to preposition all of the equipment that we’ve been using and that you’ve seen us use in response to this crisis.”

EDI, first called the European Reassurance Initiative, began in 2014 under then-President Barack Obama with $800 million. Over the next several years, funding progressively increased all the way to $6.5 billion in fiscal 2019. That was followed by a multi-year decline, down to $3.8 billion in the fiscal 2022 budget, as Pentagon officials said the initiative had achieved many of its goals, according to U.S. News and World Report.

But Russia’s invasion of Ukraine in February has sparked a global response, and the Defense Department’s 2023 budget request would increase the EDI funding for the first time in four years, to roughly $4.2 billion.

Cavoli credited past funding for enabling forces to prepare for crises like the current one and he advocated for it to continue.

“Since my first tour as a general officer in Europe, when the original ERI was authorized and appropriated, we’ve been benefiting from it,” Cavoli said. “We’ve slowly but surely used it to put infrastructure into place where we are pre-positioning equipment. And now we exercise that equipment at a large scale with the funding that this committee authorizes. It’s absolutely vital to what we’ve been doing. And I think we’ve seen the benefits of it in our rapid ability to react in the past couple of months.”

Specifically, Cavoli noted that with EDI funds, the Army was able to preposition “very modern equipment—brigade combat team sets”—in Europe and train how to transport troops over to the continent and get the equipment out of storage fast.

So when the call came for thousands of troops to deploy to Europe to respond to Russia’s invasion and bolster NATO’s eastern flank, “we moved all the troops in about four days by aircraft. And those troops, the first of them, were putting rounds downrange in less than a week,” Cavoli said. “And by the end of three weeks, every single screwdriver in the brigade had been issued.”

Cavoli’s enthusiasm for pre-positioning Army equipment has been shared by EUCOM’s current commander Gen. Tod D. Wolters, who testified to its impact in March. But, in his written responses to Advance Policy Questions, Cavoli said he would consider expanding the concept.

“If confirmed, I foresee this strategy continuing in all domains (e.g., Air Force Deployable Air Base Sets (DABS), special operations forces equipment) because it enhances our ability to respond swiftly and decisively to assure our Allies and deter further Russian aggression,” Cavoli wrote.

The Air Force’s Deployable Air Base Set, sometimes referred to as an “air base in a box,” is a package that includes equipment, facilities, vehicles, and health service support that is prepositioned so it can be used to quickly establish base operations and generate sorties without needing to airlift in supplies.

The Air Force was set to begin procurement of DABS, but the Defense Department’s inspector general released a report in January 2019 faulting the effort for a lack of coordination or designated program manager, resulting in delays.

Since then, there hasn’t been much public discussion about DABS, but pre-positioning equipment to support rapid deployments would seem to dovetail with the Air Force’s own efforts in Agile Combat Employment, the operational concept of relying on small teams of multi-capable Airmen to operate in austere locations and move quickly. And work has continued in places like Campia Turzii Air Base, Romania, to build the infrastructure needed for DABS.