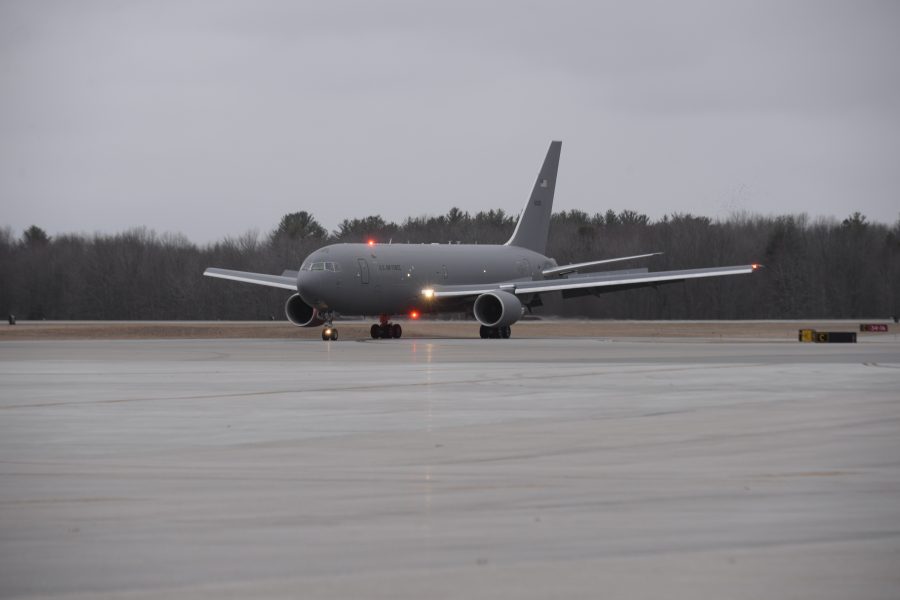 Boeing has delayed the delivery of one KC-46 tanker to the New Hampshire Air National Guard because of an electrical problem on the airplane, though the company says it’s a limited issue that will not broadly affect the schedule for the problem-ridden program.

This particular KC-46, set to be the eighth for the 157th Air Refueling Wing at Pease Air National Guard Base, is delayed because of the “minor electrical problem on this airplane that was found by our rigorous acceptance testing process,” Boeing said in a statement.

The company believes there is a poor electrical connection that needs to be removed and reinstalled. While a radar warning receiver is showing a fault while in flight, Boeing says the electrical problem is not a design flaw and does not make it unsafe to fly.

The company is considering a way to fix the aircraft, and expects the problem will be remedied within the next several days. Boeing is working with the Air Force on the new delivery schedule.

The Air Force said Oct. 1 the Defense Contract Management Agency’s acceptance process includes quality inspections, along with government ground and flight acceptance testing to ensure the aircraft’s systems operate as intended. That process occurs well before aircraft head to their home bases, and ends with a form that formalizes the aircraft’s purchase.

“Unfortunately, during the week of 28 September 2020, DCMA identified a product quality issue that did not allow delivery of the originally scheduled aircraft, and Boeing did not have additional KC-46s capable of completing the DD250 [form] process in time to meet the 2 October 2020 ferry date,” USAF spokesman Capt. Josh Benedetti said.

The service expects the aircraft will be fixed and accepted before the next scheduled delivery date on Nov. 6.

Shaheen spoke with Boeing and Air Force leaders, “all of whom have assured me we have good conversations between DOD and Boeing, and the problems are being worked out,” she said.

Still, the senator pressed Pentagon acquisition boss Ellen M. Lord on the discovery of another technical problem leading to a delay in the beleaguered tanker program.

“How do we fix this?” Shaheen asked Lord. “It’s an ongoing challenge that’s affecting our national security long-term if we don’t get the refueling tankers up and running.”

The KC-46 is an extremely problematic program, Lord said. She pointed to the tanker’s faulty remote vision system, which is being revamped because it does not properly let Airmen see other planes the tanker is trying to refuel.

Earlier this year, Boeing and the Air Force agreed on a way forward to redesign the RVS—the combination of cameras and sensors linking the boom to an operator’s station inside the tanker. The company is required to begin providing a permanent fix by 2023. Air Force officials have been optimistic about that timeline, and say they have seen a change in Boeing to address the issues.

She argued the fundamental problem stems from the KC-46’s fixed-price contract, but did not elaborate. The original $4.9 billion award is designed to protect the Pentagon from cost overruns, while Boeing must spend $4.7 billion of its own money on fees incurred over the course of the program.

To fix the overall program, it “will take very careful, senior DOD attention,” Lord said. She and Secretary of Defense Mark T. Esper have spoken to Boeing CEO Dave Calhoun, as well as Leanne Caret, the head of Boeing’s defense business, about the way forward.

“We will do that on a frequent basis,” Lord said. “We will talk to [Air Force acquisition boss] Will Roper about it. I have metrics that I follow very, very closely. We have to manage by the data, follow on a monthly basis what the cost, timing, actual functionality of the program looks like.”