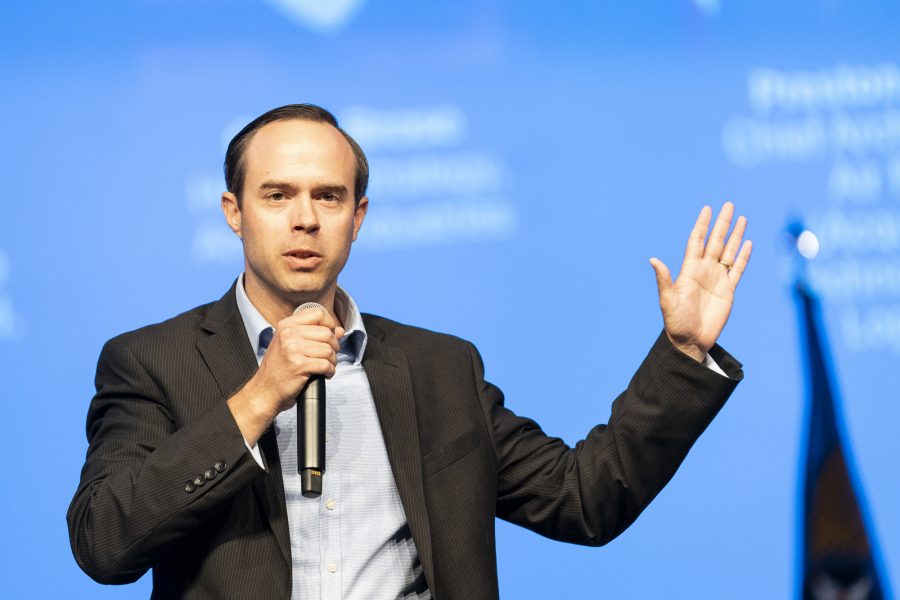 Dunlap Looks to the Future of ABMS

Nearly two years after he was named as the Air Force’s Advanced Battle Management System czar, Preston Dunlap is offering more details on how the lofty concept could become a reality that’s here to stay.

He began the job of chief architect with a wide-ranging review of the Air Force’s programs to see where the breakdowns in communication, technology, and culture were happening. That team then laid out a blueprint for the various tools and processes it needed to better connect the force and shake up combat roles.

After a year of tech demonstrations across the country alongside the other military services, the ABMS team now has a clearer vision of which tools the Department of the Air Force can roll out the soonest that would immediately benefit troops. Starting in February, Dunlap wants to offer a network that Airmen overseas and elsewhere without access to hardwired internet can tap into for information on what’s unfolding around them.

“I suspect release one will have what will look like a forward-edge, mini-Internet of Things that then touches back to our cloud-based infrastructure,” Dunlap told reporters Dec. 16. “The program team has already done amazing work getting a warfighting tech stack ready, … but that’s that cloud platform software application environment that’s globally accessible.”

At an upcoming demonstration in Europe, the military aims to test-drive a better combat network that doesn’t rely on a brick-and-mortar operations center or the intelligence-crunching Distributed Common Ground System to share data. Dunlap indicated that it could dovetail with plans to turn refueling fleets into data-sharing nodes as well.

Air Force Magazine recently reported the service is eyeing communications pods that could ride on tankers so the planes could share combat data with pilots who fly up to refuel. Will Roper, the department’s acquisition boss, envisions tankers could be reimagined as multipurpose hubs within 18 months.

Air Force Chief of Staff Gen. Charles Q. Brown Jr. and Space Force Chief of Space Operations Gen. John W. “Jay” Raymond will have the final say over the direction of each release, or round of new capabilities.

“We’re going to take that [accessible cloud-based network] as sort of case one, and then just continue to cumulatively build that, both in terms of nesting in new platforms and compute capabilities at the edge, … and then on my Space Force side of it, matching that to other Space Force-relevant capabilities,” Dunlap said.

Expanding the mission sets of existing Air Force fleets is now the responsibility of the secretive Rapid Capabilities Office, which the service recently named as the program executive office overseeing ABMS. The RCO will be in charge of packaging new capabilities together that reimagine how the military inventory is used day-to-day.

“The major tactical move here that’s happened is, we’ve had an interim team at [the Air Force Life Cycle Management Center] that’s been doing a heroic job doing the execution elements for the ABMS program,” Dunlap said. “With the appointment of an official PEO for the program, that allows us to be able to take massive scale, and focus across the whole life cycle of the program. So this is a really good thing to be able to achieve.”

His team will still guide the overarching vision for how ABMS should piece together Air Force assets. The RCO will manage the acquisition, maintenance, and upgrades of those tools.

Procurement officials must also handle challenges to those contracts, such as a recent protest by Anduril Industries. The firm is petitioning the Government Accountability Office for a review of the “tactical edge node support” piece of ABMS, which it argues is being too narrow in how it picks companies to participate, according to Inside Defense.

Dunlap and an Anduril spokeswoman declined to comment on the protest, filed Nov. 16. A ruling is due Feb. 24 and could force USAF to change course on its acquisition approach.

Over the past year, the tech demonstrations also have been a proving ground for other promising Air Force and Space Force ideas that fall outside of the ABMS umbrella—like the Global Lightning initiative to bring commercial satellite internet onto planes, or trying out a hypervelocity gun in the works at the Pentagon’s Strategic Capabilities Office.

Dunlap wants the department’s various technology ventures to have a closer relationship with ABMS. He’s looking to drive more of that integration across the science and technology world in 2021, noting that it may require congressional buy-in.

“There’s so many opportunities to be able to bring the ecosystem together, and focused attention to do that is just going to have outsized gains and impacts,” he said.

There are growing opportunities for the military to try out new ideas as a Joint Force, too. Dunlap said part of his team is visiting the Army’s Aberdeen Proving Ground in Maryland, for example, to discuss how to move forward.

High-level military officials are drawing up a plan for how the armed forces should approach joint all-domain command-and-control, including the requirements that technology in each service needs to meet so fighter jets can talk to artillery systems and ship sensors, for instance. Their leadership on the issue is expected to help avoid the problems that have stymied connectivity in the past, like divergent data standards.

“The team has been very particular to work closely with the Joint Staff and the vice chairman to make sure that we can use this actually as a test case, running through his new requirements approach. We found great synergy there between the two,” Dunlap said.

The Department of the Air Force will use that guidance to shape its real-life ABMS tests, in concert with the RCO’s contracting work, to put out useful new tools.

Establishing new ground rules for how the Joint Force should move forward will help ingrain joint warfighting for the long haul, even after its champions like Roper and Hyten leave DOD.

“It would be a disservice to the operators to go back to thinking of vertical, insular systems as the way to win,” Dunlap said. “This set of capabilities in all the services are going to continue to be at the forefront of the minds and direction of DOD.”