Skip to content
From left to right, retired USAF Lt. Gen. David Deptula, dean of the Air Force Association's Mitchell Institute for Aerospace Studies, and Matthew Donovan, under secretary of defense for personnel and readiness, have a virtual discussion during the April 28, 2020, installment of the think tank's "Aerospace Nation" series. Mitchell Institute courtesy photo.
Expand Photo 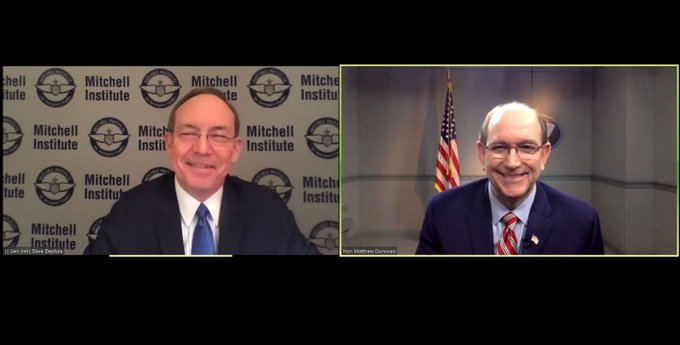 The services will likely fall short of their end-strength goals this year because of the impacts of the new coronavirus outbreak, though positive trends in recruitment have remained and more troops are voluntarily extending their service to close the overall gap, the Pentagon’s head of personnel said April 28.

Matt Donovan, under secretary of defense for personnel and readiness, said the restriction on movement has caused a drop in the number of people coming into basic training, an effect that will be felt for years. The Air Force, for example, has reduced its Basic Military Training class size by almost 50 percent.

This “leaves us a gap if people are retiring and separating at the same level,” Donovan said during an AFA Mitchell Institute for Aerospace Studies virtual event. But because of the uncertainty in the U.S. economy due to the virus, the services are “making up for the gap now with folks deciding to stay longer … They look [to the economy] and think, ‘I’ve got a pretty good job now, I want to stay.’”

For the Air Force and the flying components of other services, there might be a change to the ongoing pilot shortage crisis. In a strong economy, the military largely can not compete with the salaries and benefits of airlines. But now, pilots are seeing that “it’s not a great time to get out and go to the commercial airlines because of the downturn.”

There has not been an impact on recruiting amid the coronavirus outbreak, as services have been able to move to almost exclusively online recruiting and processing. For example, the Marine Corps is at 100 percent of its recruiting requirement, though it is still early and more will be known in the coming months.

While the Pentagon has adjusted some policies, it has not halted others such as the “deploy or get out” initiative started in 2017 under then-Defense Secretary Jim Mattis. “There’s no halt,” Donovan said. However, as more is learned of the virus and its effects on people, that could change.

Since the outbreak began, the Pentagon has put in place mandatory social distancing when possible, additional telework, required the wearing of masks, and put in place restrictions on overall movement. Donovan said most of these constraints will remain until there’s a widely available vaccine.

It’s too soon to specify the exact impacts to the Total Force end strength, Donovan said, though he did say the services will be “somewhat short of end-strength goals.”

Longer term, as the federal government looks to future budget issues as the national debt has grown, the Pentagon can’t expect increased funding. Months ago, under a growing economy, the Pentagon was calling for 3-5 percent real growth after years of flatlined budgets. And now, “If we keep zero real growth over the FYDP, [the Pentagon] will be happy with that.”