Skip to content
1st Lt. Lyndsy Harrison, a 700th Airlift Squadron navigator, smiles at the announcement that she and Capt. Will Jones, 700th Airlift Squadron pilot, are officially married during a ceremony on the back of a C-130H3 Hercules at Dobbins Air Reserve Base, on Nov. 10, 2020. The couple came up with the idea to get married on the back of a C-130 to honor their love of aviation. Courtesy photo via the Air Force.
Expand Photo 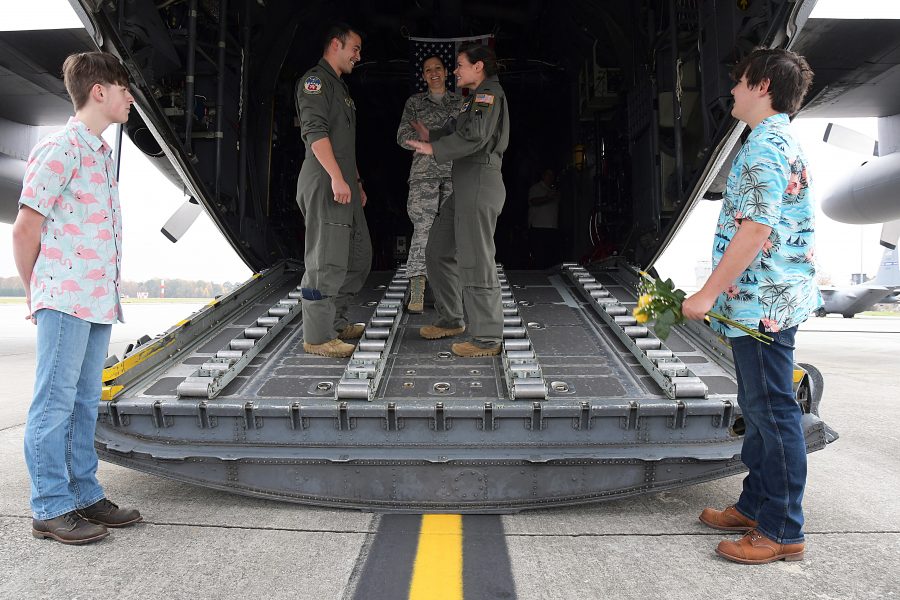 Dobbins Reservists Tie the Knot Aboard a C-130

Two Air Force Reservists from the 700th Airlift Squadron got married on the back of C-130 Hercules on the flight line at Dobbins Air Reserve Base, Ga., on Nov. 10, according to a 94th Airlift Wing release.

Capt. Will Jones, a pilot, married 1st Lt. Lyndsy Harrison, a navigator, in the AvGeek-worthy ceremony.

“I think when he brought up the idea of us getting married in the back of the plane, he threw it out there as a joke,” Harrison said in the release. “But when I approved and was just as stoked about it as he was, we didn’t want to do it anywhere else.”

The unconventional wedding setting came with some unique logistical challenges.

Since married couples can’t fly on the same aircraft—a rule that’d make mid-flight nuptials problematic—they decided to get married while the aircraft was on the ground, the release said.

Further, since they couldn’t commission a special flight for their wedding, they tracked down a pre-scheduled one and strategized their special day around it, the release explained.

“It was a planned training sortie,” Harrison said in the release. “We were both being evaluated by instructor aircrew.”

When rain falls on someone’s big day, it’s said to be a good omen, but Jones admitted that the wedding-day weather worried him.

“My biggest concern was flying a two-ship tactical mission in the weather,” he said in the release. “I didn’t get nervous or have the wedding portion on my mind until the engines were shut down and I was unbuckling my seatbelt.”

The Dobbins duo also had to ensure they were on leave when the ceremony actually kicked off—since they couldn’t say “I do” while they were on the clock—so the nuptials had to wait until the engine was shut off and checklists were finished, according to the release.

“After a crew chief marshalled in the plane, the aircrew lowered the ramp, revealing a U.S. Flag hanging as a backdrop,” the release recalled. “The pilot and navigator—or in this case, the bride and groom—rushed off the back of the plane like a couple late to the chapel and got into position.”

The mother of the groom pinned “a yellow rose boutonniere” to his flight suit, the bride’s parents gave her a bouquet of matching blooms, and 94th Airlift Wing Chaplain Capt. Sara Parris officiated, according to the release.

At the end of the ceremony, Jones lowered the topside of the Hercules’ ramp, upon which the words “Just Married” had been scrawled in chalk, the release said.