Retired Lt. Col. Dick Cole, a key participant in the first US offensive action against Japan in WWII, and who was the last surviving member of the Doolittle Raiders, died in Comfort, Texas, on April 9, at the age of 103.

Cole co-piloted the lead ship with Lt. Col. Jimmy Doolittle during the mission, which launched 16 B-25 Mitchell bombers with 80 men aboard from the deck of the USS Hornet on April 18, 1942, toward targets in Japan. Cole, then a 26-year old lieutenant who had joined the Army before the war, was hand-picked by Doolittle, who recruited only expert, mature aviators for the mission. Although the raid inflicted minimal damage on Japan, and all 16 aircraft were lost either to enemy action, captured, or crashed, it was both a huge boost to American morale and a shock to the Japanese military leadership, who felt the home islands were too far away from American forces to be at any risk.

Unable to find the planned landing field in China, Doolittle’s crew bailed out of their B-25 when it ran out of fuel after 12 hours of flying. Aided by Chinese locals and western missionaries, Cole, Doolittle, and their crew evaded the Japanese and eventually made it back to the US. Of the 80 Raiders, 77 initially survived: eight were captured by Japan, three of them were executed, while one died as a prisoner of war.

Watch the video in full-screen here.

While most of the other raid survivors went to war in Europe, Cole served in Southeast Asia, flying cargo planes over the “Hump”—the Himalaya mountains—between India and China. He was later recruited to be part of the founding cadre of Air Commandos. His C-47 towed a glider of paratroops into Burma as part of an orchestrated drop of troops to launch the allied invasion of that country in 1944.

Cole attended the annual Doolittle Raider reunions, including the last, which took place in November 2013 with the last three members. He became a defacto spokesman for the group, which was awarded the Congressional Gold Medal by President Obama in May, 2014.

In later years, Cole became a kind of airpower ambassador, appearing at WWII commemorations, airshows, and other aviation events, offering sharp-witted comments about the challenges of flying in WWII versus the technologies available to aviators of today.

Cole passed hours after receiving a visit from USAF Chief of Staff Gen. David Goldfein. Addressing the National Space Symposium on the day of Cole’s death, Goldfein said, “There’s another hole in our formation, and our last remaining Doolittle Raider has ‘slipped the surly bonds of Earth’ and is now reunited with his fellow Raiders. And what a reunion they must be having.” Goldfein said the Air Force is “so proud to carry the torch that he and his fellow Raiders handed us. … We’re going to miss [Lt.] Col. Cole and we offer our eternal thanks and our condolences to his family. The legacy of the Doolittle Raiders will live forever in the hearts of and minds of airmen long after we’ve all departed.”

Air Force Secretary Heather Wilson, in a statement for the press, said, “The Air Force mourns” with Cole’s family. “We will honor him and the courageous Doolittle Raiders as pioneers in aviation who continue to guide our bright future.”

“Dick Cole’s story is the story of the Air Force itself. While many focus on airplanes when they think about key moments in airpower history, it’s crucial to remember that the real accomplishments lie with the airmen who put service before self and flew into harm’s way. Dick Cole was a prime example of this commitment,” Air Force Association president retired Lt. Gen. Bruce “Orville” Wright said. “Up until the very last, he served as an ambassador for airpower at events around the world. America’s Air Force is better for the service of Dick Cole and all of us who knew him are sad to lose a tremendous friend and role model.” 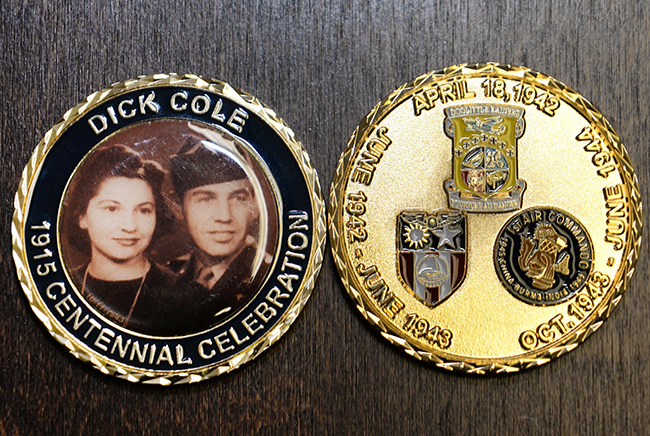 Retired Lt. Col. Dick Cole gave the 28th Operations Group nine challenge coins to thank the Airmen who flew a flag during a combat mission on his 100th birthday on Sept. 7, 2015. The 37th Bomb Squadron honored Cole’s actions as a Doolittle Raider and strives to emulate the Raider’s legacy of dedication, sacrifice and boldness. Photo by SrA. Rebecca Imwalle/USAF

Tom Casey, president of the Doolittle Tokyo Raiders Association, said there are plans for a memorial service at JBSA-Randolph, Texas; a burial at Arlington National Cemetery, and a ceremony at the National Museum of the US Air Force at Wright-Patterson AFB, Ohio, which is the keeper of the Doolittle Raider cups. The 80 goblets are inscribed with the names of all the Raiders, and at the reunions, the goblets of those Raiders who died in the previous year were turned over. Cole’s will be the last to be turned over.