On Tuesday, SSgt. Richard Hunter, a combat controller assigned to the 23rd Special Tactics Squadron at Hurlburt Field, Fla., will receive the Air Force Cross for his actions directing airstrikes and fighting off an enemy ambush in northern Kunduz province, Afghanistan, on Nov. 2, 2016. Over an eight-hour assault, he directed four strike aircraft to deliver more than 1,700 munitions, while saving the lives of 57 team members and killing 27 enemies. On Monday, he told his story to reporters on a conference call. Read the full story by Wilson Brissett.

US Showcasing Airpower, Exercising at Sea, and Practicing Evacuations in South Korea

US forces in South Korea are conducting multiple exercises that are focused on exhibiting its airpower, maritime special operations, and the ability to evacuated families and Defense Department personnel if needed. From Oct. 17-22, US aircraft including the F-22, A-10, C-17, C-130J, B-1B, KC-135, E-3, U-2, RQ-4, and the F-35 will be on display or participate in aerial demonstrations at the 2017 Seoul International Aerospace & Defense Exhibition. In addition, the US Navy’s P-8A and the US Army’s CH-47F Chinook will be on display. The show is a chance to “demonstrate its commitment to the stability and security of the Indo-Asia-Pacific region,” according to Pacific Air Forces. At the same time, three US Navy ships—the USS Ronald Reagan, USS Stethem, and USS Mustin—are participating in the Maritime Counter Special Operations Exercise, which runs from Oct. 16-26. The exercise, which will also include 7th Air Force along with the Republic of Korea military personnel, is focused on potential maritime provocations by North Korea, South Korean officials said in a statement to NK News. US Forces Korea is also currently conducting exercise Courageous Channel, which since 1996 has been held to ensure that the US military is able to evacuate family members and non-emergency essential Defense Department civilians. —Brian Everstine

Airmen at Beale AFB, Calif., have joined the fight against wildfires across California, sending civil engineers to work with local firefighters. The 9th Civil Engineering Squadron on Oct. 9 was dispatched to work on the Cascade fire, and battled flames for 60 hours, A1C Thomas Rush, 9th CES firefighter, said in a Beale release. The group had 12 hours off, before working on another fire. Then took one night off before fighting another blaze. There are four fires burning near Beale, with about 17,000 acres burned and hundreds of residents displaced, according to Cal Fire. In addition to civil engineer teams, Beale has dispatched airmen to support the Grass Valley Interagency Air Attack Base, which is approximately 35 miles from the base and is a hub for aircraft involved in the effort. There are about 2,200 members of the California National Guard serving on state Active Duty to battle the fire, Pentagon spokesman Army Col. Robert Manning said Monday. The 163rd Attack Wing of the California Air National Guard activated last week, flying MQ-9 Reapers to provide imagery of affected areas. The aircraft have compassed six different fires over some 77,000 acres and identified about 1,500 burned structures, according to a March Air Reserve Base release. Travis Air Force Base has been designated a Federal Emergency Management Agency support base for response to the Atlas Fire. Buses, ambulances, and personnel began arriving on Thursday for responses across the region. —Brian Everstine 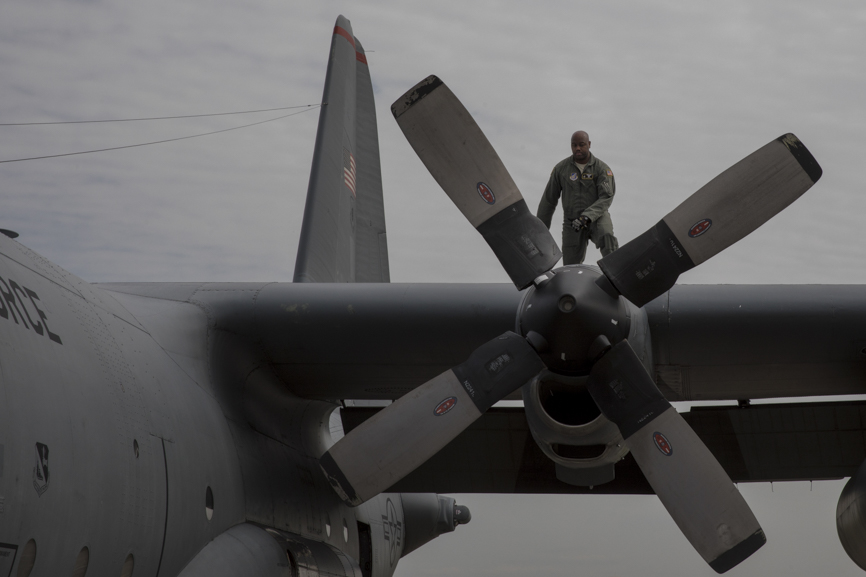 A C-130H assigned to the 36th Airlift Squadron completed the aircraft’s final Active Duty tactical training sortie at Yokota AB, Japan, on Oct. 5. The aircraft had perfect weather for its final mission, which included a low-cost, low-altitude airdrop. “It is sad to see the H-models go, and it was a privilege to be a part of the last Active Duty C-130H squadron,” said Capt. Travis Wilkes, pilot and commander of the final flight, according to a press release. The H-model completed the transition from C-130Es at Yokota in 2007, and they have flown missions for Operation Enduring Freedom and Operation Iraqi Freedom, as well as many humanitarian missions in places like Myanmar, the Philippines, and the Micronesian islands. “It was like reliving history,” said Capt. Thomas Bernard, another C-130H pilot from the 36th AS. “This aircraft has been a huge part of the US Air Force’s missions across the world. I feel lucky to have been a part of that history.” C-130Js, which can fly higher and faster and have a better maintenance record, are taking over the mission now.

US Urges Iraqi, Kurdish Forces to Avoid Conflict Near Kirkuk

Iraqi Security Forces on Monday took territory near the city of Kirkuk from Kurdish forces, a move US officials say is distracting from the ISIS fight. The Pentagon said there was a limited exchange of fire between the two sides, and is encouraging both sides to use dialogue to avoid further escalation. Read the full report by Brian Everstine.

The House Armed Services Committee has announced the names of 31 of its members assigned to the House-Senate conference committee for the Fiscal 2018 National Defense Authorization Act. The House passed its version of the NDAA, which includes a provision to establish a separate Space Corps within the Air Force, in July. The Senate passed its own NDAA in September without a Space Corps provision. Now the joint conference hopes to work out the differences between the House and Senate versions by the end of October. While the Senate has yet to vote on sending the bill to conference, the House named HASC chair Rep. Mac Thornberry (R-Texas) and ranking member Rep. Adam Smith (D-Wash.) to the conference committee, along with Space Corps proposal architects Rep. Mike Rogers (R-Ala.) and Rep. Jim Cooper (D-Tenn.). The House also voted to close portions of the conference proceedings.

—Lockheed Martin President Marillyn Hewson penned an op-ed in Washington Post recently advocating for continued human space exploration. Hewson said ideally, humans would “work in tandem with robots to explore, analyze, and learn together.” She also noted space exploration is even more critical now as the “United States is falling behind in science, technology, engineering, and math—the critical skills required to drive innovation and competitiveness.”

—An F-35A landed at Eielson AFB, Alaska, last week where it will undergo cold weather testing. Specifically, officials are looking to certify the fifth-generation aircraft’s “Norwegian drag-chut” and demonstrate the fleet’s ability to land “at a runway condition reading of 7:” Eielson release.