Lockheed Martin and Raytheon on Wednesday were each awarded $900 million technology maturation and risk reduction contracts for the Long Range Standoff weapon (LRSO), the Air Force’s program to replace the air-launched component of the nation’s nuclear triad. Read the full report by Wilson Brissett.

The White House’s strategy toward Afghanistan amounts to a long-term US commitment, with a larger American presence expected to stay in that country to continue fighting the Taliban and training Afghan forces, the top uniformed US official there said. US Army Gen. John Nicholson, commander of US Forces-Afghanistan, said Thursday that President Trump’s strategy “is guided by conditions on the ground and not arbitrary timelines. It provides for more US and NATO resources. The momentum is ours.” Trump said in a prime-time speech Monday night, that the US will deploy more troops and loosen rules of engagement to seek an “enduring victory” in Afghanistan. The US will not detail troop deployments or set timelines for withdrawal, Trump announced. Nicholson told reporters in Kabul that the US is “determined to prevent Afghanistan from becoming a safe haven for terrorists, who wish to attack the rest of the world from Afghan soil.” He called on the Taliban to stop fighting and join the peace process. —

The White House is reportedly expected to bar the Pentagon from admitting transgender people, and give Defense Secretary James Mattis authority to remove those individuals already in the service. The Wall Street Journal, citing a White House memo, said the White House is expected to send guidance to the Pentagon on how to implement a ban on transgender people in the military. The order follows tweets from President Donald Trump last month saying that he is ordering the government not to accept or allow transgender individuals to serve “in any capacity.” The tweets caught the Pentagon by surprise, and came shortly after Mattis requested an extension to study the issue of allowing transgender people to join the military. Current DOD policy permits military members to transition and remain in service. —

US Considering Sending Weapons to Ukraine

The US is considering sending Ukraine defensive weapons to assist that country in staving off Russian aggression, and is pressing Russia to stop “redrawing international borders by force,” Defense Secretary James Mattis said Thursday. Speaking alongside Ukrainian president Petro Poroshenko in Kiev, Mattis said Russia is “undermining the sovereign and free nations of Europe” by continuing its incursion into Crimea. Mattis visited Kiev on Ukraine’s Independence Day and said his presence there is a sign the US wants to strengthen its relationship. The US has provided $750 million in aid in the last several years and is now looking at providing defensive lethal aid. Defensive weapons, such as Javelin anti-tank missiles, are not meant to be threatening to Russia, Mattis said. These weapons “are not provocative unless you are an aggressor, and clearly Ukraine is not an aggressor since it is their territory where the fighting is happening,” he said. —_ 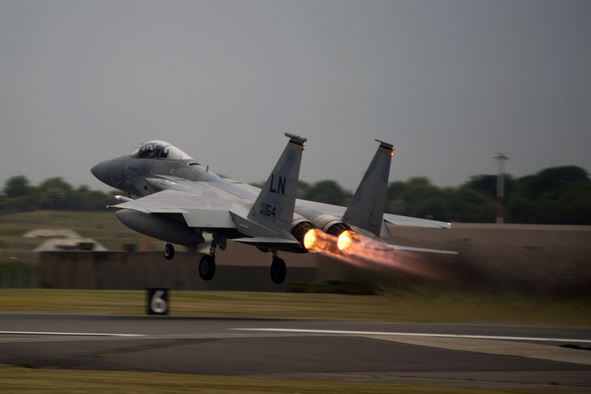 USAF fighters will take over the Baltic Air Policing mission in the coming weeks, taking the watch from Polish fighters. F-15Cs from the 48th Fighter Wing at RAF Lakenheath, England, will deploy to Siauliai Air Base, Lithuania, Sept. 1 and will stay through the end of the calendar year, Lakenheath said in a release. The F-15Cs will take over for four Polish F-16s that deployed to the base earlier this year. The Baltic Air Policing mission began in 2004 and focuses on protecting the airspace over NATO allied nations in Eastern Europe. —Brian Everstine

Lockheed Martin this month tested a privately funded Low Cost Terminal by connecting it to an on-orbit Advanced Extremely High Frequency satellite, the company announced Thursday. The terminal, developed by Lockheed and Northrop Grumman, is designed to let more users access the AEHF system, which provides secure transfer of information such as nuclear command and control and targeting data. The recent demonstration is the first time an industry-funded and developed terminal was able to access an AEHF satellite, Lockheed said in a release. The terminal is being developed in three variants – airborne, ground, and rapidly deployable fixed terminal designs, according to Lockheed. The company expects the terminals to be available by the end of 2018. —Brian Everstine

USAF is calling its newest modernization initiative the “most ambitious knowledge outreach program to date.” In a release about AFwerX, an innovation push Air Force Secretary Heather Wilson said would help “strip out bureaucracy” when she announced it in July, the service explained in more detail how it would work. The first AFwerX location will open by “early 2018” next to the University of Nevada-Las Vegas. From there, USAF will be issuing challenges to the general public, called “sprints,” which will be based on problems that need fixing within the service, with specific eyes toward innovation. Staff at the AFwerX location will help the public “break down” the red tape necessary to bring ideas to the table, facilitate them through the proper acquisition and testing steps, and then connect those ideas to Air Force leadership, even offering “small monetary awards and initial prototype investments” to worthy innovations. The idea is to fund a lot of small ideas in the hope that some will develop into effective, inexpensive solutions. —

—An Air Force Reserve crew from the 317th and 701st Airlift Squadrons had a unique opportunity to practice their “time on target” skills Monday when their routine C-17 training flight gave them a chance to track the path of the solar eclipse as it passed through South Carolina: JB Charleston release

—Northrop Grumman has a plan to fix the the communications problems between the F-35 and the F-22. It wants to use the remotely piloted RQ-4 Global Hawk as a communications go-between: Defense News

—The Pentagon is under-reporting how many troops it has deployed to Afghanistan, Iraq, and Syria, and Secretary of Defense Jim Mattis is working to better align the Department of Defense’s public numbers with the reality on the ground:? Military Times