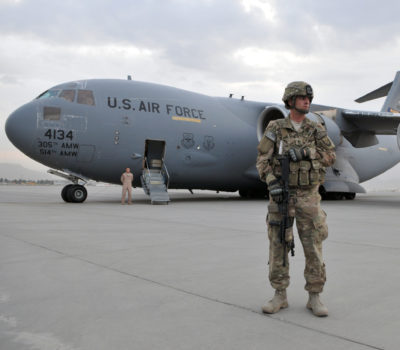 By Brian W. Everstine and Abraham Mahshie
The Pentagon on Aug. 12 detailed a massive plan to protect American diplomats and Afghan special immigrant visa applicants in Kabul, ordering 3,000 Marines and Soldiers to Kabul within days, with an additional 1,000 Soldiers and Airmen deploying to Qatar to facilitate visa processing and an Army Brigade Combat Team of up to 4,000 Soldiers on standby in Kuwait should security in Afghanistan further deteriorate. An airlift surge will take the troops to Kabul, and the Pentagon expects gray-tail mobility aircraft will be needed to ferry out U.S. diplomats and a large increase in translators and other Afghans seeking visas to leave the country. 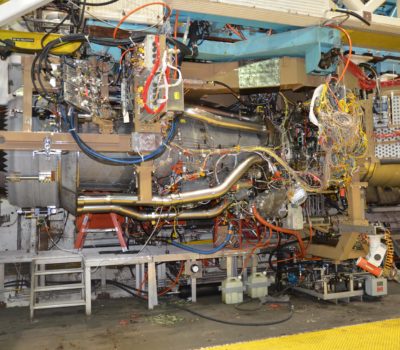 USAF: New Engine Technologies May Not Retrofit to Existing Fighters

By John A. Tirpak
The Air Force won't be able to retrofit its existing fighters with new technology created in the Adaptive Engine Transition Program, the service's program executive officer for fighters and advanced aircraft reported. He and the propulsion directorate are instead partnering on squeezing more capability out of the technology already fielded and planning to put AETP technology into future fighters such as the Next Generation Air Dominance jet. 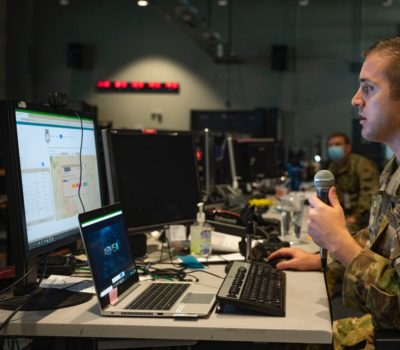 By Greg Hadley
The Air Force’s chief software officer is pushing hard for the service to adopt security into its cyber development and operations from the start. He's also calling for a more unified approach to reduce redundancies. Speaking at an Air Force Association Gabriel Chapter luncheon Aug. 11, Nicolas M. Chaillan offered a blunt assessment of where the Air Force’s cyber capabilities stood when he first went to work for the service in 2018 and even until today. “I realized pretty quickly, we're very behind in cyber, to a point that it was very scary when it comes to critical infrastructure and the lack of security,” Chaillan said. “And we see it every day, more and more, and I still don't believe we have any kind of handle on what's going on.” 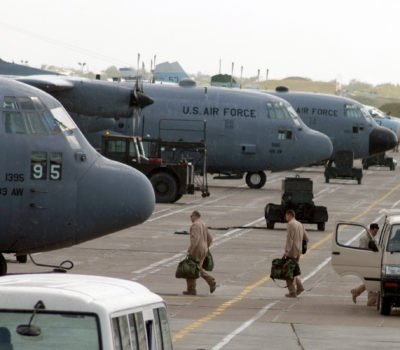 Uzbekistan a Candidate for U.S. ‘Over-the-Horizon’ Support to Afghanistan

By Abraham Mahshie
With Afghan provincial capitals falling like dominoes in recent days, the Pentagon is still resisting pressure to promise air support to Afghanistan after the Aug. 31 withdrawal deadline. Countries in the region, however, may be key to providing the over-the-horizon support needed to turn the tide for the Afghan government. An Uzbek military official who spoke to Air Force Magazine on Aug. 12 said his government had responded to some of the questions from the American government but that negotiations were ongoing.

Budgetary Pressures Could Push Skyborg Beyond 2023

The Air Force is backing off its 2023 goal to transition the AI-driven Skyborg drone experiments to a formal procurement program, with one of Skyborg’s lead officers citing the need for considerable budgetary tradeoffs. “I don’t know that I would commit to a timeline of when it will be a program of record,” Brig. Gen. Dale R. White told reporters. White, who is the program executive officer for fighters and advanced aircraft at the Air Force Life Cycle Management Center, explained that the issue isn’t actually reaching desired capability by 2023. Instead, it’s about money.

Space Force leaders are hashing out a plan to create a new group under U.S. Central Command to coordinate what military space assets to use in the region, complementary to the Air Force’s own ops organization in the Middle East. Service components in each region respond to combatant commanders’ requests for forces to handle daily missions. The fledgling reorganization aims to directly involve the Space Force in those discussions and ultimately lead to more robust space ops.

The Army plans to continue to experiment with small satellites as a way to inform requirements for future long-range strike capabilities, according to Richard P. De Fatta, director of the Army Space and Missile Defense Center of Excellence. However, in remarks to the Space and Missile Defense Symposium in Huntsville, Ala., on Aug. 10, he took pains to stress the Army’s current mantra that it does not want to build and operate its own satellites.

The U.S. Space Force is launching a new industry outreach program expected to award up to $50 million in contracts to small businesses and startups. Called SpaceWERX, the program is the space-focused spinoff of AFWERX, created by the Air Force in 2017 to tap into private-sector investment and help bring to market nascent technologies relevant to national security. SpaceWERX on Aug. 19 will hold its inaugural event, a virtual Space Force Pitch Day in which companies will pitch technologies and compete for up to $34 million in Small Business Innovation Research Phase 2 contracts.

DOD Awards $1B Contract to Peraton to Counter Misinformation

The Department of Defense has awarded a task order worth up to $979 million over a five-year period to Peraton to counter misinformation from U.S. adversaries. The contractor will provide services to U.S. Central Command and its mission partners with operational planning, implementation, and assessment services.

COVID-19 Was More Widespread in US Military Earlier in the Pandemic Than Previously Thought, Report Finds

A new Defense Health Agency report shows that the coronavirus was circulating on domestic U.S. military installations by late February 2020—in some cases, weeks before the first positive cases were identified at those locations. New testing of samples collected last year for flu surveillance show that a patient at Wright-Patterson Air Force Base, Ohio, had COVID-19 on Feb. 24, 2020, the same day as the first known case identified by the Defense Department—a dependent widow in South Korea—and the day before an Army soldier, also in Korea, was listed as the first service member to have contracted the illness.

When four A-10 Warthogs flew over the MLB game at the Field of Dreams, Iowans piloted all the way. All four pilots of the attack planes are from Iowa or have family there: Capt. “Pistol” Rindels, family from Waterloo, Iowa; Maj. “Zero” Carlton, from Sioux City, Iowa; Maj. “Jewcy” Berry, from Des Moines, Iowa; and Lt. Col. “Deuce” Siems, from Dewitt, Iowa. The A-10s are from Whiteman Air Force Base in Missouri and part of the 303rd Fighter Squadron based there. The flyover happened at the start of the MLB Field of Dreams game between the New York Yankees and the Chicago White Sox on Aug. 12.