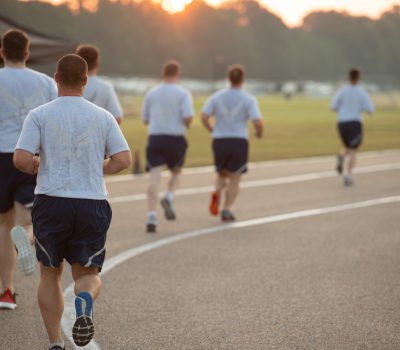 By Amy Hudson
The Air Force is bringing back physical fitness testing July 1 after multiple delays due to the COVID-19 pandemic, Chief Master Sergeant of the Air Force JoAnne S. Bass said during a virtual coffee talk May 11. “Read my lips: We are not changing the PT start date,” Bass said. “We have to have a fit culture, and we will resume PT testing on 1 July. So, again, leadership, make sure your folks are ready. Make sure you’re leading by example." 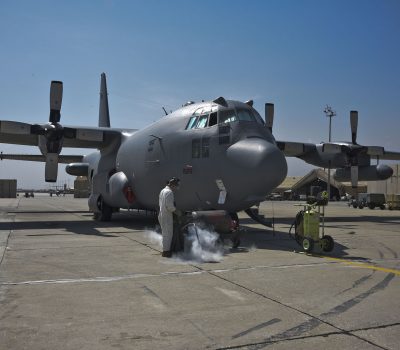 By John A. Tirpak
The Pentagon needs an overseer at the highest level for the joint electromagnetic warfare fight to coordinate responses to China and Russia, experts said at a Hudson Institute webinar. The services' fragmented approach can be overcome by the enterprise approach taken by U.S. adversaries, they said. Members of Congress on the panel said they'd push for such changes. 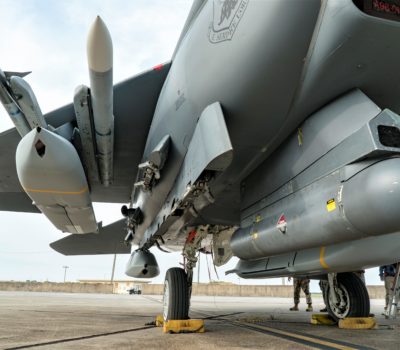 By Brian W. Everstine
The 85th Test and Evaluation Squadron at Eglin Air Force Base, Florida, loaded five AGM-158 Joint Air-to-Surface Standoff Missiles onto an F-15E, more than doubling the Strike Eagle's normal JASSM load. The test comes about two months after the wing demonstrated that the Strike Eagle can carry up to 15 Joint Direct Attack Munitions. 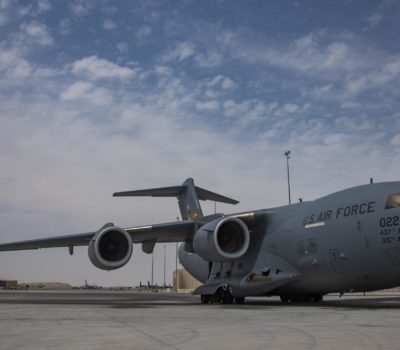 Airlift Continues Out of Afghanistan as Violence Remains

By Brian W. Everstine
U.S. C-17s have now flown 104 loads of materiel out of Afghanistan as the retrograde continues, and U.S. Central Command plans to destroy more than 1,800 pieces of equipment. Between six and 12 percent of the entire retrograde process is complete, CENTCOM said in a May 11 statement. 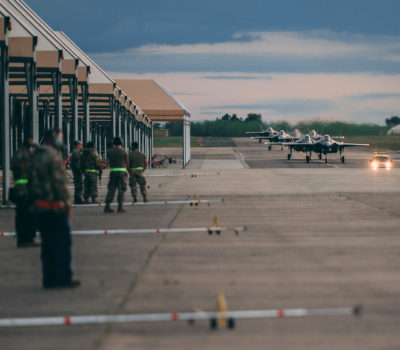 By Brian W. Everstine
F-35s from Hill Air Force Base, Utah, will take part in Atlantic Trident 21, a major France-led air exercise focused on integrating fourth- and fifth-generation aircraft. The F-35s from the 4th Fighter Squadron touched down at Mont-de-Marsan Air Base, France, on May 10. The squadron is made up of Active-duty Airmen from the 388th Fighter Wing and reservists from the 419th Fighter Wing. Atlantic Trident 21 runs May 17-28 and includes participants from the U.S., France, and the United Kingdom.

The U.S. Space Force has officially renamed the 45th Space Wing that oversees Florida’s launch ranges Space Launch Delta 45, the service announced May 11. Plans to rename the former Air Force space launch wing were announced last month. To create its own identity separate from the Air Force, the Space Force is naming its units deltas.

The Air Force has started using virtual reality to get hunter-killer drone pilots and sensor operators up to speed at Holloman Air Force Base, N.M. Last month, trainees at the base began using Oculus Quest 2 headsets that allow them to simulate being in a drone cockpit, watching instructors remotely pilot an MQ-9 Reaper aircraft, according to the Air Force.

More Than a Year After its Landing Gear Collapsed, an F-22 Is Back in the Air

More than a year after its landing gear collapsed on the flight line at Joint Base Langley-Eustis, Virginia, an F-22 Raptor took to the skies for the first time last month thanks to Virginia Air National Guard maintainers. Airmen from the 192nd Maintenance Group were able to get the fifth-generation jet, tail number 85, up and running for its first flight back April 9.

The Air Force is testing a specialized uniform and other gear meant to protect Airmen in case of chemical, biological, radiological, or nuclear, or CBRN, attacks. Members of the 88th Test and Evaluation Squadron tried out the new Uniform Integrated Protective Ensemble, or UIPE, Air system on HH-60 Pave Hawk helicopters at Nellis Air Force Base, Nevada, last month, according to a news release.

Raymond: Space Force Seeks to ‘Move at Speed’ Through Partnerships

Gen. John W. “Jay” Raymond, Chief of Space Operations, said the U.S. Space Force, which was created in December 2019, is accelerating efforts to meet its near-term priorities, the Air Force reported. “We have set conditions to outpace emerging and dynamic threats and create new military options, working with the joint force, interagency, industry, and our partners and allies.”

An overhaul on a new jet fueling system has been completed at northern Indiana’s Grissom Air Reserve Base following several years of work to replace a system installed in the 1950s.

“Security tensions are brewing in East Asia. China has on several recent occasions sent military aircraft to fly around Taiwan, including into its air defense identification zone, complete with taunts from the Chinese pilots. Officials and analysts worry that an attack on the self-governing island could be in the offing. But when? Sometime between tomorrow and mid-century. Or never. No one knows, and that’s because no one really knows what drives China’s decision-making,” writes Jacob Stokes of the Center for a New America.

Iraq’s Air Force is at a Crossroads

Recent reports indicate that the Iraqi Air Force is facing a multitude of problems that raise questions about its future. Lockheed Martin contractors providing crucial maintenance and technical support for the service’s 34 F-16C/D Block 52 fighter-bombers are evacuating Iraq again, at least for a few months, due to the continuous threat of Iran-backed Iraqi militia rocket attacks. … In 2020, numerous reports indicated that corruption coupled with a lack of spare parts and technical support took a heavy toll on Iraq’s F-16s.

President Biden has nominated former Under Secretary of Defense Frank Kendall to be the next Secretary of the Air Force. It will be some time before the Senate gets around to holding confirmation hearings, but Kendall’s credentials are so solid that official Washington is treating him like he already has the job.

Produced by the 9076th Voluntary Air Reserve Group, the short film recaps the events in Los Angeles during August 1951 as well as promoting the association and the Air Force. The film opens with two large bombers flying in the sky then landing. American actor Reed Hadley poses as an Air Force officer who talks to the camera about the need for more planes in the Air Force.