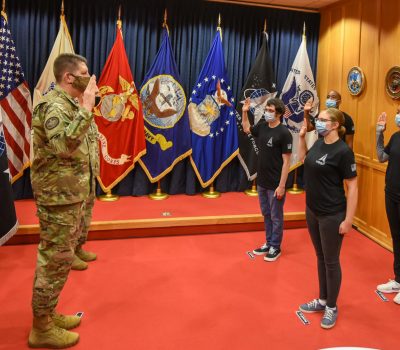 By Rachel S. Cohen
Seven Space Force hopefuls will ship out this week to the service’s inaugural boot camp at Joint Base San Antonio, Texas. The Space Force is piggybacking on the Air Force’s long-standing Basic Military Training process while it grows its own. Those who graduate from the approximately eight-week program will become the first enlisted members the Space Force has trained itself, rather than importing personnel from the other services. 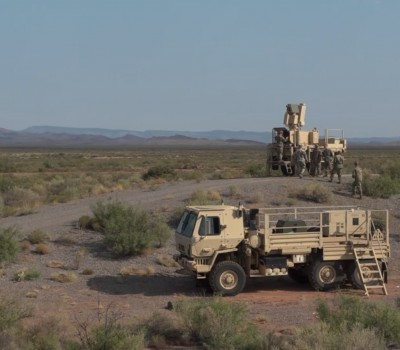 By Rachel S. Cohen
Air Force and Army leaders recently reached an agreement to partner more closely on joint all-domain command and control over the next two years. The services are still scoping out how to pursue a common data standard, and haven’t chosen specific systems or platforms to collaborate on or launched new development programs as a result. The Army will play a bigger role in the Air Force’s periodic ABMS demonstrations (known as “on-ramps”) as a result of the agreement, and likewise for Air Force participation in Project Convergence events. The Air Force did not indicate it is working on a similar agreement with the Navy and Marine Corps. 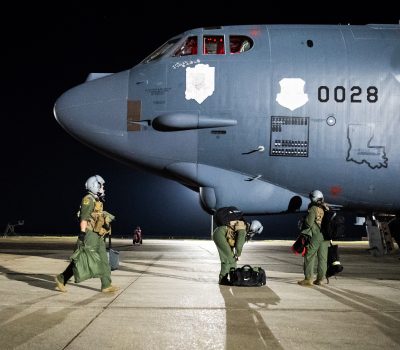 By Jennifer-Leigh Oprihory
Two B-52H Stratofortresses from the 96th Bomb Squadron at Barksdale Air Force Base, La., left the installation on the evening of Oct. 13, flew nonstop to Europe to train with NATO over the North Sea, and returned the next night, 2nd Bomb Wing spokesperson Capt. Christopher Sullivan told Air Force Magazine. And on Oct. 14, eight other Barksdale-based BUFFs took part in an elephant walk back at the wing's home base, the wing told Air Force Magazine. 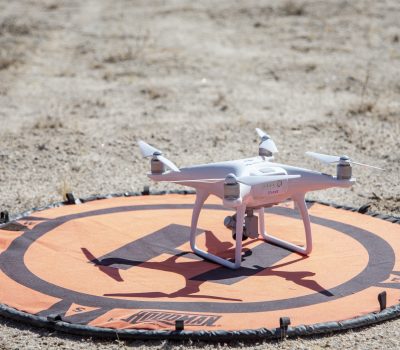 By Rachel S. Cohen
The Air Force is in the market for upgrades to its counter-drone technologies, according to an Oct. 16 request for information posted on a federal contracting website. The service is in the early stages of deploying lasers, microwaves, and other weapons more advanced than a shotgun to deal with potentially threatening drones loitering around bases. In particular, the RFI is looking for ideas to fend off the smallest unmanned aerial systems like quadcopters.

Top Military Leaders Cleared to Return to Work at Pentagon

The nation’s top military leaders have been cleared to return to work at the Pentagon after having self-quarantined as a precaution following the positive COVID-19 test of a senior Coast Guard official in early October.

UN Arms Embargoes on Iran Expire Despite US Objections

A decade-long U.N. arms embargo on Iran that barred it from purchasing foreign weapons like tanks and fighter jets expired Oct. 18 as planned under its nuclear deal with world powers, despite objections from the United States, which insists the ban remains in place. While Iran says it plans no “buying spree,” it can now in theory purchase weapons to upgrade military armaments dating back to before its 1979 Islamic Revolution and sell its own locally produced gear abroad.

The Defense Department has to undertake a foundational “redesign of how we manage our data” in order to succeed at creating a joint all-domain command and control network for orchestrating future information-centric warfare against peer adversaries, says Lt. Gen. B. Chance Saltzman, the Space Force’s deputy chief of space operations for operations, cyber, and nuclear.

In early June, four National Guard spy planes took to the skies over several cities to monitor street protests following the killing of George Floyd, triggering concerns that the military was improperly gathering intelligence on U.S. citizens. Three of the reconnaissance planes kept watch on demonstrations in Minneapolis, Phoenix, and Washington that drew hundreds or thousands of protesters and were marred by violence. But the target of the fourth plane was far more surprising: the affluent Sacramento, Calif., suburb of El Dorado Hills, the scene of much smaller and entirely peaceful protests.

Army aviation officials recently provided an update on the service's field-testing of its next-generation drone aircraft program, a key modernization effort under Future Vertical Lift. The Future Tactical Unmanned Aircraft System is being developed to replace the current RQ-7B Shadow UAS to provide brigade combat teams with day and night reconnaissance and surveillance of enemy forces on the future battlefield.

AFWERX, the Air Force’s innovation catalyst, announces the Reimagining Energy for the DOD Challenge, seeking solutions to create the future of resilient energy production, transmission, use, and storage. The Defense Department is currently the largest energy consumer globally. By reducing demand and reliance on petroleum and modernizing the energy infrastructure, the Air Force can improve the way it consumes energy, increase sustainability, and remain adaptable to future impacts of climate change and reduction in fossil fuels.

A Democratic lawmaker is urging the IRS to quickly process amended tax returns filed by the families of deceased military members after Congress enacted legislation last year to provide these families with tax relief.

President Donald J. Trump on Oct. 17 signed into law a pair of bills designed to help prevent veterans suicide, including a measure to establish a new three-digit national crisis line similar to 911 for mental health emergencies.

A ridge east of Paradise Valley, Mont., where a bomber crashed in 1962 has officially been named “B-47 Ridge” in honor of the four Air Force pilots who died there. President Donald J. Trump signed the bipartisan B-47 Designation Act into law on Oct. 13.