Can Ellsworth Be Saved?

The Chairman of the BRAC commission, Anthony Principi, said Monday that he does not agree with the Pentagon estimate of savings for closing Ellsworth AFB, S.D. In fact, Principi said in an interview to be aired tonight on C-SPAN that...

Principi believes the Pentagon has overreached with its plans for the New England area, including closing Otis ANGB, Mass., and would leave the area virtually unprotected. In his words: “My concern is that perhaps they’ve gone too far.”

The Thunderbirds plan to continue their aerial demonstration schedule. After reviewing safety procedures following the Aug. 20 incident in Chicago in which two of the team’s F-16s touched wingtips while in flight, dropping a missile rail from one Viper into...

Bush to Vets: We Will Finish the Task

President Bush, in Salt Lake City Monday, said that the nation owed it to the US forces who have died in Iraq (1,864) and Afghanistan (223) to “finish the task that they gave their lives for.” Bush’s remark re-affirms, in...

Why does the Air Force want to 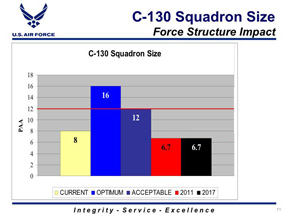 consolidate Air National Guard squadrons? One answer: to gain efficiency. USAF believes the most effective size for a C-130 squadron is 16 aircraft. Because of the ANG’s stability and experience, Guard C-130 squadrons can make do with 12. The problem is that, as the graph shows, a typical ANG unit today has eight C-130s, and, without intervention, the number will fall to 6.7 per squadron by 2011. That, Maj. Gen. Gary Heckman told BRAC commissioners, makes the enterprise very inefficient. USAF wants to fix the problem by cutting ANG squadrons and consolidating aircraft into fewer, bigger units. This, of course, has caused a political explosion in the states. 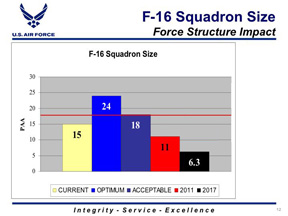 airlift numbers weren’t sobering enough, USAF says that the typical ANG F-16 squadron today has 15 fighters. The optimum number is 24, or, in the case of experienced ANG forces, 18 per squadron. Eighteen would ensure there are sufficient fighters to perform a given mission. Unless ANG redistributes airframes among fewer units, normal aircraft attrition will take the number of F-16s per ANG squadron in 2017 down to 6.3. Again, says the Air Force, very inefficient.

The Air Force said Friday that it had to alert more than 33,000 airmen that some of their individual information—career and personal—had fallen into nefarious hands. A “malicious user” appropriated a legitimate user’s login info to gain access to and...

Carlson Takes Over in Dayton

Does Stevens See a Grant From Galena?

Does Stevens See an End to Galena?: Sen. Ted Stevens has uncharacteristically thrown in the towel on a state military base matter. The powerful Alaska Republican said in a Thursday press conference that he believes the BRAC panel will vote...

Remember when India’s MiG-21s, working with Su-30s, gave our front-line F-15 fighters all they could handle in the 2004 Cope India? That was a clear indictment of Beltway analysts who claim USAF doesn’t need the F/A-22 because it is so...

The remains of Air Force Col. Gregg Hartness of Dallas, who has been missing in action since Nov. 26, 1968, when his O-2A Skymaster was struck by enemy fire over Laos and crashed, were identified from remains recovered in January...

From Slim Pickens to Captain Jones

The B-1B Lancer, once part of the US nuclear deterrent force, finally made an appearance in Russian airspace. It was taking part in the 2005 Moscow International Air Show and Space Salon held last week. “It’s an honor to fly...

Colman McCarthy Has the Answer

Should the Pentagon offer new recruits an option to finish post-active-duty military obligations in the Peace Corps, rather than the reserves? It was a question ready made for commentary by Colman McCarthy, former Washington Post columnist and now director of...

But Can They Still Dream of England?

Airman From Moody Gets AFSA Award

The Air Force Sergeants Association tapped SSgt. Yusef Saad, a native of Puerto Rico and a mobile fuels shift supervisor with the 347th Logistics Readiness Squadron at Moody AFB, Ga., for its First Term Airman of the Year award.

Excalibur has resurfaced. It is the formerly annual fighter competition that was killed off after the end of the Cold War. The meet pits USAFE fighter pilots against RAF compatriots, and it roared to life for three days last week.

Air Sorties From the Global War on Terrorism