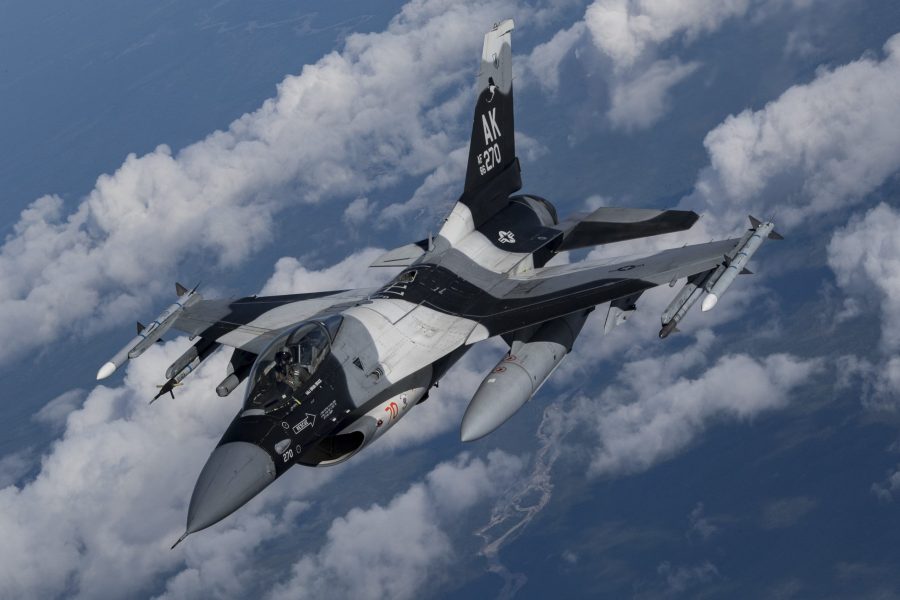 The draft 2020 defense policy bill prohibits the Air Force from transferring any low-rate initial production F-35s to the adversary air role until the chief of staff submits a report to Congress detailing the service’s plan for modernizing its organic aggressor fleet.

The Air Force has two aggressor squadrons, one at Nellis AFB, Nev., and one at Eielson AFB, Alaska. Both fly F-16s, but the Air Force announced plans earlier this year to reactivate the 65th Aggressor Squadron at Nellis and transfer nine non-combat capable F-35As from Eglin AFB, Fla., to Nellis in an effort to improve training for fifth-generation fighters. The 65th, which previously flew F-15s as aggressors, was inactivated in 2014 due to budget cuts. The service also wants to move two more F-35s from Edwards AFB, Calif, to the 24th Tactical Air Support Squadron at Nellis for additional close air support training.

“It is critical that the Air Force has the capability to train against an advanced air adversary in order to be prepared for conflicts against a modern enemy force, and that in order to have this capability, the Air Force must have access to an advanced adversary force prior to United States adversaries fielding a 5th-generation operational capability; and the Air Force’s plan to use low-rate initial production F-35As as aggressor aircraft reflects a recognition of the need to field a modernized aggressor fleet,” according to the policy conference report released on Dec. 9.

Congressional emphasis on improving organic USAF aggressors comes as the Air Force also looks to bolster the role of contracted Red Air under a potential $6.4 billion multi-award contract. In October, USAF awarded seven companies an indefinite-delivery, indefinite quantity contract, allowing them to vie for task orders at up to 22 locations, including as many as 12 for adversary air and 10 for contract CAS.

The service announced earlier in the year it planned to expand contractor-run adversary air from one to three locations in 2020. In addition to support from Draken International at Nellis, the first task orders offered could be to set up a permanent presence of private adversary air at Klamath Falls Arpt./Kingsley Field, Ore., and Holloman AFB, N.M., service officials have said.

Draken, which has been flying Red Air at Nellis since 2015, is on contract to fly about 5,600 hours of adversary air there a year, but that could be increased to 7,500 hours. The first of 24 Draken Mirage F1 supersonic aircraft, purchased from the Spanish Air Force, took flight last month at the company’s facility in Lakeland, Fla. The F1s eventually will complement the company’s 11 A-4 Skyhawks and 18 L-159 Honey Badgers already flying Red Air at Nellis.

For Top Aces, one of the seven companies awarded a contract in October, the IDIQ was a “very important milestone” because it allowed them to bring their fleet of F-16s purchased from an unidentified country into the United States, Top Aces President Russ Quinn told Air Force Magazine.

“Our aircraft have been in preparation for quite some time in anticipation of this, so now the next move for us is really with the US government in the formal third party transfer we’re involved in right now,” Quinn said. He acknowledged the transfer is a “complex process,” but said he hopes to move through it as “expeditiously as we can,” noting that Top Aces has been working with the US State Department for two years already.

“We have invested millions of dollars to make sure that as soon as the F-16s arrive in the US they are ready to service the contract that we have,” he added.

Mick Guthals, the senior manager of business development at Tactical Air Support, another company included in the October award, told Air Force Magazine that eight of its 21 F-5E/F supersonic aircraft purchased from the Royal Jordanian Air Force have gone through FAA certification and five have undergone required modifications and are awaiting military flight clearance. Those five aircraft are likely to service the Navy; Guthals said the company is still building jets for Air Combat Command.

Airborne Tactical Advantage Company also has made progress with its F1 fleet. Its parent company, Textron Airborne Solutions, procured 63 Mirage aircraft from the French Air Force in 2017, and the  company plans to allocate the majority of those aircraft for Red Air. Since August, ATAC has qualified its first F1 pilots for duties, conducted its first F1flight for the US Navy, and held a ribbon-cutting  ceremony for its ATAC ACE facility at Fort Worth Alliance Airport, where they will conduct  maintenance and training for the F1s, an ATAC spokesman told Air Force Magazine.

“Aggressor squadrons have been honing the skills of Air Force pilots since the early 1970s,” Goldfein said in May when the F-35 decision was announced. “They provide a dose of realism in air exercises and their training value is crucial. These F-35 aggressor aircraft will keep us ahead of adversaries for years to come.”

The House approved the draft bill on Dec. 11 and the Senate is expected to pick it up this week.