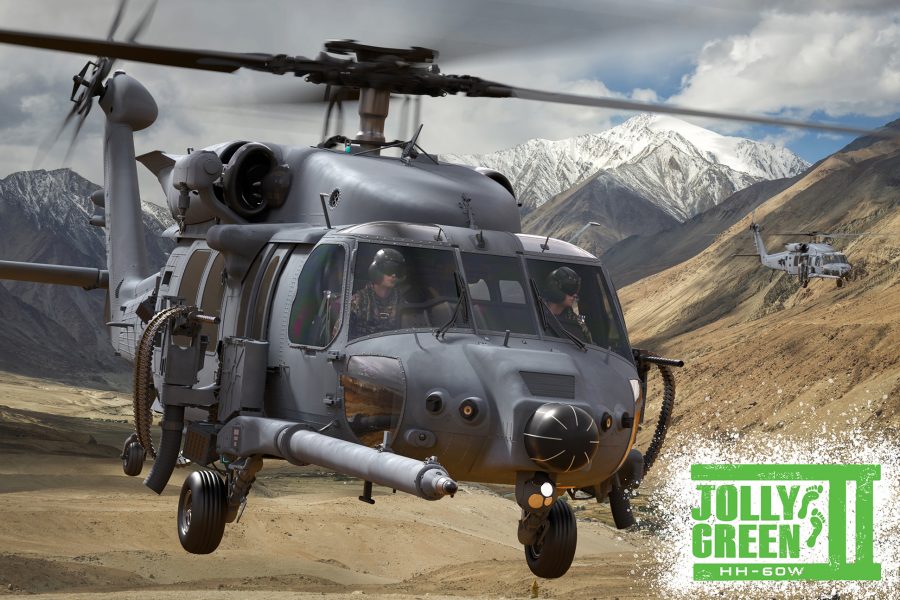 The new helicopter, slated to replace the HH-60G Pave Hawk, will carry on the name of the venerable Vietnam-era HH-3E, which flew combat rescue missions from 1967 to 1995. Air Force Secretary Barbara Barrett unveiled the name during her keynote at AFA’s Air Warfare Symposium in Orlando, Fla., on Feb. 27, with an early production model on-site.

The new helicopter honors the history of combat search and rescue, with Barrett highlighting missions from Vietnam—when crews with limited equipment made dramatic rescues due to their “bravery and tenacity”—to a heroic flight of Jolly 4-1 and Jolly 4-2 to rescue U.S. special operations troops under fire in Somalia.

A model of the HH-60W unveiled on stage showed the famous green feet symbol, the Vietnam-era origin of the nickname Jolly Green Giant for the HH-3. The named carried on with the HH-53 Super Jolly Green Giant, which was replaced by the CV-22.

The Sikorsky HH-60W Jolly Green II is under production as part of a $7.1 billion procurement program, with the target to buy 112 aircraft. Deliveries are expected to begin in the second quarter of fiscal 2021. The helicopter is based on the current HH-60G Pave Hawk, with improved avionics, armor, armament, and engines, among other characteristics.

Four aircraft have been in test at Sikorsky’s Palm Beach, Fla., facility along with additional electronic systems testing at Eglin AFB, Fla.