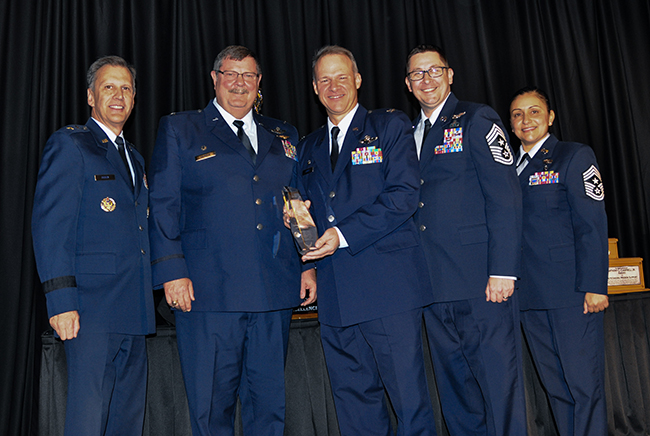 A JB Charleston, S.C., C-17 crew recently received an award for its handling of an in-flight fire over the summer that caused extensive damage to the aircraft.

In June, the crew of REACH 111, from the 315th Airlift Wing, was assigned to support the Joint Interagency Task Force South to airlift a Coast Guard HH-65 Dolphin helicopter from Panama to Curacao for ongoing counter narcotics efforts. During the final leg of the delivery, the C-17 indicated that its No. 3 engine generator had a fault. The crew started checklists, and three minutes later the right manifold failed, indicating a problem with the jet’s heating and cooling system, according to an Air Mobility Command release.

The crew ran its emergency manifold checklist, declared an emergency, and requested to return to Panama, which at the time was about 120 miles away. Crewmembers on the plane looked out the window for smoke or fire, and saw vapor beginning to come out of the right wing. The aircrew diagnosed it as a No. 3 hydraulic quantity leak, the release states.

Pilots shut down the engine’s hydraulic system as a fire began in the wing and pylon, which enabled them to maintain some hydraulic fluid needed to lower landing gear. They then accelerated the aircraft to just below the red-line airspeed for the C-17.

When they reached Panama, the aircrew used an auxiliary hydraulic pump away from the fire to lower the landing gear.

“This action saved them precious minutes of recovery time as running the manual gear extension checklist without the use of the #3 hydraulic system is a lengthy and complicated procedure,” Lt. Col. Stephen Campbell, assistant chief pilot with the 701st Airlift Squadron, said in the release.

Upon landing safely in Panama, an inspection showed extensive damage done to the aircraft, according to AMC.