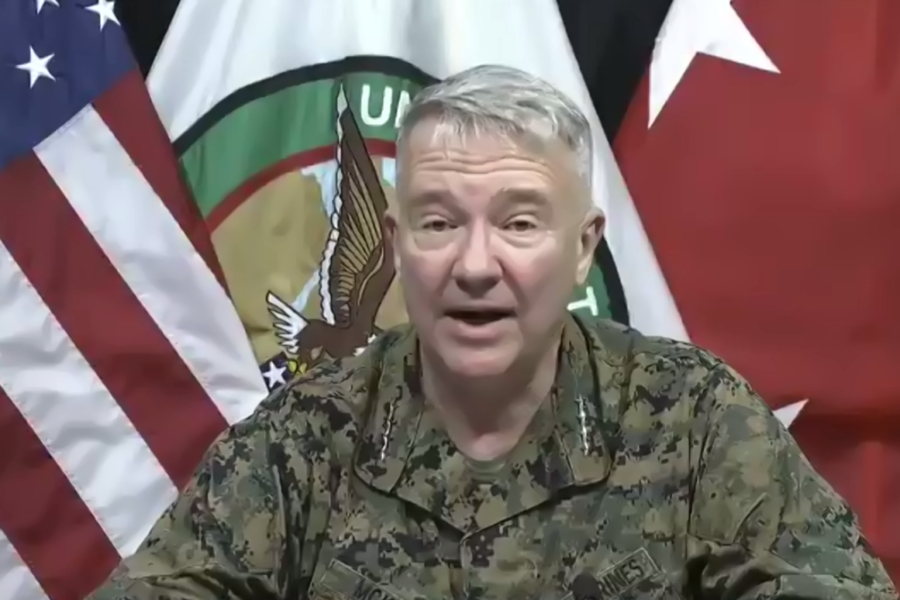 While much of the Pentagon’s stated focus in the past few months has been about pivoting away from the Middle East to strategic competition with Russia and China, “the most immediate and credible threats to the American homeland” are still coming from the Middle East, U.S. Central Command boss Gen. Kenneth F. McKenzie Jr. argued Feb. 3.

And the biggest threat in CENTCOM, McKenzie added during a virtual seminar hosted by the Middle East Institute, is neither the Taliban in Afghanistan nor the Islamic State group—it’s Iran.

Iran “remains the central threat around which U.S. Central Command is organized and my top priority as its commander,” McKenzie said in his keynote address. “Specifically, my mission is to deter Iran from undertaking malign activities that undermine the security and stability of the region.”

While Afghanistan generated the most headlines during the U.S. withdrawal last summer, and ISIS was back in the news Feb. 3 after their leader died during an American raid, Iran has steadily developed as a threat to the region and to American interests, McKenzie said.

“For the last five to seven years, Iran has relentlessly built its theater ballistic missile capabilities. These are surface-to-surface missiles that have ranges that can go as far as Israel, for some of their missiles,” McKenzie said. “But they have several thousands of these missiles, and they have assiduously cultivated this force, … even at the fact of starving their own people to ensure that the engineers, the factories that generate these missiles have the resources they need to do it.”

On top of its ballistic missile stockpile, Iran has also made a large effort in the “last two to three years” to grow its fleets of drones and land attack cruise missiles.

Iran’s use of these expanded arsenals has been limited thus far—McKenzie credited that in part to the U.S.’s airstrike killing Iranian military leader Maj. Gen. Qassem Soleimani. But there have been a series of recent strikes conducted by Iranian-backed militias on Iraq, Syria, Saudi Arabia, and the United Arab Emirates. The strikes have mostly been attributed to Yemeni Houthi rebels.

“Do any of us actually believe that those missiles were engineered and designed in Yemen?” McKenzie said. “Clearly, they were finished there, they were launched from there, but they came from someplace else, and I think we all know where that place was.”

McKenzie referred to the current state of affairs as “contested deterrence, because we have largely achieved that goal in that we believe Iran is deterred from taking those actions directly. However, what Iran is obviously not deterred from is acting with their proxies to advance their regional goals across the region.”

But while Iran continues to threaten stability in the region with its support for these rogue militias, it has also created an opportunity for the U.S. Iran’s aggressive actions have “focused the minds of our partners in the Gulf,” McKenzie argued.

“Here’s the opportunity: Collective security in that region could best be approached, I would argue, initially from an integrated approach to air and missile defense,” McKenzie said. “And here’s the beauty of that approach: It does not threaten state sovereignty. You don’t have to station someone else’s forces in your country. You don’t have to send your forces to be stationed in someone else’s country. Instead, what it’s about is the sharing of information. Because really, in order to have an integrated air and missile defense, what you need is good sensor coverage that is shared, to build what we call a common operational picture, that all partners can see.”

Integrated air and missile defense is an objective that CENTCOM commanders have pursued for years, McKenzie acknowledged, and the Gulf Cooperation Council—composed of Bahrain, Kuwait, Oman, Qatar, Saudi Arabia, and the United Arab Emirates—have frequently struggled to cooperate.

But in addition to Iran’s overaggression, there are other reasons to be optimistic, McKenzie said, the first being the easing of tensions between Qatar and other Gulf nations, as well as the fact that U.S. President Joe Biden has nominated Qatar to be designated a “major non-NATO ally,” and its cooperation in an integrated defense system is crucial, McKenzie said.

“If you look at a map of the Gulf, Qatar occupies key geographic terrain right in the middle,” McKenzie said. “It is hard to come up with a good defense architecture if Qatar is not part of that architecture.”

Second, McKenzie said, is the recent shift of Israel from the European Command area of responsibility to CENTCOM’s.

“The unique capabilities that Israel brings, now that Israel is in the Central Command area of responsibility, is another great resource that we can draw upon as we build this,” McKenzie said.

All this taken together presents a “rare opportunity,” McKenzie said, but he also warned against “overselling” the promise of a breakthrough.

McKenzie himself, however, won’t be in charge of any integrated air and missile defense—his tenure as head of CENTCOM is coming to an end soon. The White House has nominated Army Lt. Gen. Michael “Erik” Kurilla to take over as commander.