Skip to content
Soldier’s from the 623rd Field Artillery Battalion load HIMARS onto a C-17 as a part of a HI-RAIN mission for their annual certification and training at the Louisville Air National Guard Base in Louisville, Ky., on Aug. 6, 2020. Soldiers and Airmen worked together to pull off the successful mission. Army photo by Spc. Jesse Elbouab.
Expand Photo 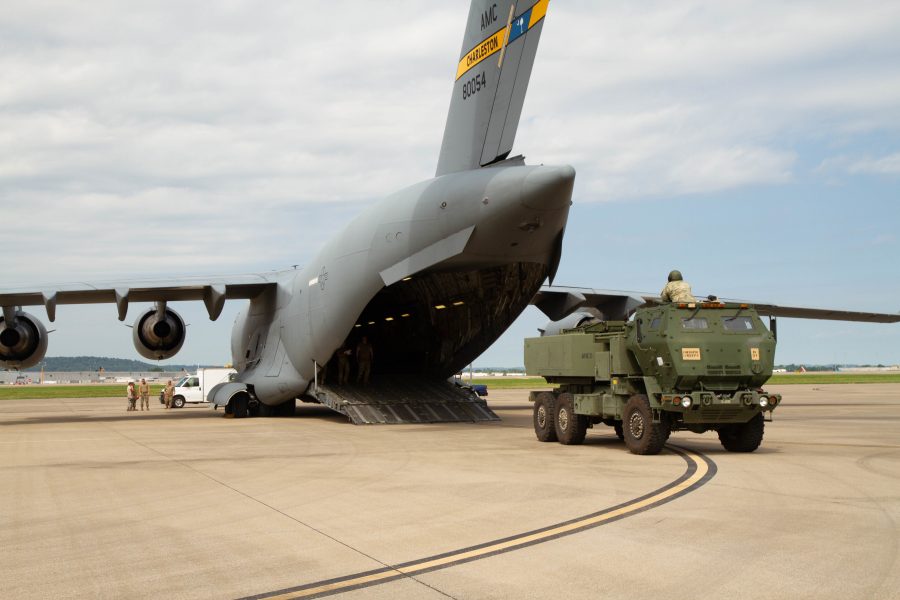 Air Mobility Command is testing how its workhorse strategic airlifter can not only carry in combat weapons systems, but also directly contribute to a fight by dropping bombs and providing targeting data for artillery.

“This concept, once fully mature, is for the munitions to behave just as if they were dropped from a bomber aircraft,” Van Ovost told reporters. “They separate from the airplane, they ignite their motors, fly to pre-designated waypoints using different flight altitudes, and then they strike their targets. Our Airmen are hard at work, further developing this concept, but it was a powerful demonstration of how mobility forces can be used in non-traditional ways.”

The JDAM pallet went through its first phase one trial as part of the Sept. 3 event at Nellis Air Force Base, Nev., and is going through additional tests as part of the next onramps, including the ongoing evaluation in the Pacific. As part of the third phase, the system will actually fire a missile, Van Ovost said.

“We have very capable C-17s that are around the world at any one time,” Van Ovost said. “Our ability to flex to use this airplane in multiple ways is what really brings this richness to operations. While we’re flying regular cargo deployments and distributions, there are still lots of legs where we’re flying airplanes where you have the capacity to do so. We haven’t really looked at the full concept to see how many it would take, and this is not taking the place of any of the Global Strike capabilities. This is just the capability we want to have, should we need it, and if we pull it into an [operations] plan, that’s great.”

The ability to drop munitions, instead of just carrying them, would “enhance the Joint Force when they need us,” she said. In order for the capability to be operational, there needs to be additional training for the aircrews and new targeting and other sensor systems aboard the aircraft.

During the same ABMS experiment, another C-17 was equipped with an enhanced, beyond-line-of-sight communication capability. The Globemaster III was carrying an M142 High Mobility Artillery Rocket System, and the advanced sensors and communication equipment passed along targeting information to the artillery system in flight. The system was “spun up” the entire time it was on the aircraft, and the C-17’s data retargeted it so when the aircraft landed, the HIMARS rolled off ready to fire “in a fraction of the time it normally did,” Van Ovost said.

“When it got off the airplane, it could immediately employ, and if you wanted to, [you could] roll it right back on to the C-17 and take off out of there before an enemy can determine its location, all because we had beyond-line-of-sight capability,” she said.