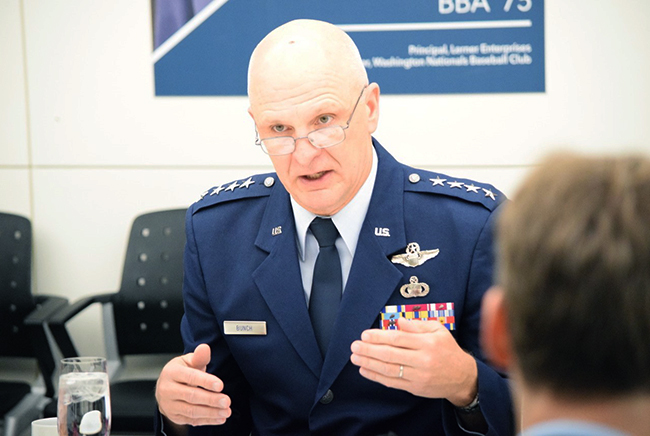 The Air Force can speed up production of the B-21 bomber and/or build more of the jets without having to renegotiate the original contract for the program with Northrop Grumman, Air Force Materiel Command chief Gen. Arnold Bunch said Nov. 21.

“We’ve got the contract structured in a manner that we can go higher” than the planned 100 aircraft, Bunch told defense reporters in Washington, D.C. “I’m not worried that we’ll have to go back and renegotiate that whole thing.” Bunch was one of the senior officials involved in structuring the highly classified B-21 contract when he was the top USAF uniformed acquisition chief in 2015.

He acknowledged that while the Air Force has “not come off” its oft-repeated requirement for “at least 100” B-21s, more are being contemplated.

“If you look at “the [Air] Force We Need’” analysis rolled out last year, “we know we need more long-range strike. And that’s the bomber force. So we know we’ve got to have that.”

The B-21 is still in development, and Bunch suggested that decisions about rate and final buy would come once the program enters the production phase.

Bunch declined to discuss the rate at which Northrop Grumman’s Palmdale, Calif., facility will be able to produce B-21s. “That’s something that we’ll look at later on. I believe we have the ability to ramp up, some, I just can’t tell you how much we can ramp up. And right now, the program’s staying on track.”

The B-21 contract was awarded in the fall of 2015. It calls for engineering and manufacturing development of the aircraft, plus the first five production lots, totaling 21 airplanes, at an overall cost of $21.4 billion. The production contract is governed by options that call for the jets to be produced at a unit cost not to exceed $550 million in base year 2010 dollars, which would be $647 million in today’s dollars.

At the time of the contract, the Air Force said it was eyeing a program of “80-100” new bombers. Two years later, the official wording changed to “at least 100 bombers,” and service leaders are now saying the figure could be around 156 airplanes. The “Air Force We Need” analysis calls for seven additional bomber squadrons, at an average size of eight aircraft per squadron. Chief of Staff Gen. David Goldfein in September asserted he is “in lockstep” with the conclusions of external think tanks that have suggested a larger bomber force is required, saying “I’m hoping we can … buy B-21s faster” and “accelerate in numbers.”