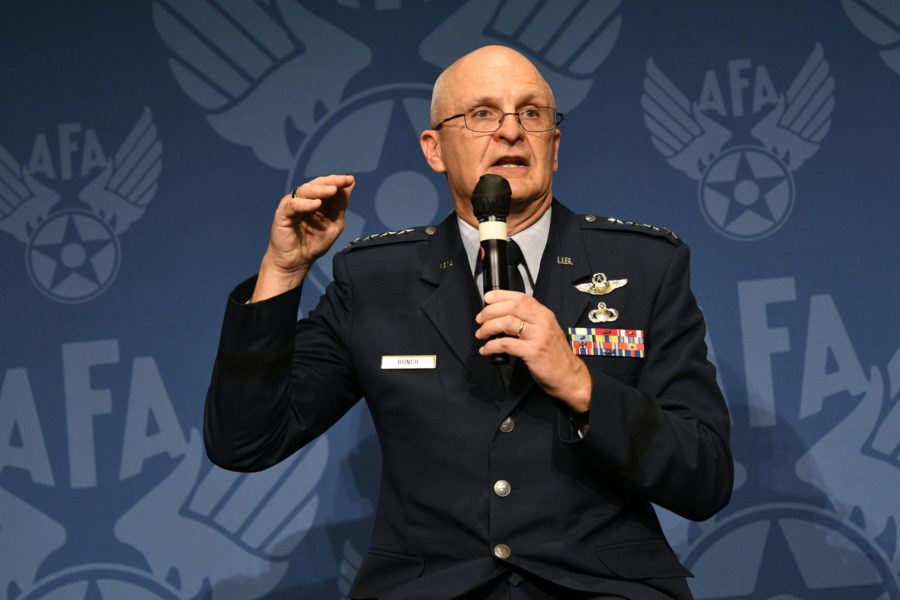 Bunch: AFMC ‘Not Going Back’ to Pre-COVID Office Model

Air Force Materiel Command has shown that it can perform its missions without all its employees and Airmen in the office and is aiming to have only half of pre-COVID headquarters staff back at their desks, AFMC commander Gen. Arnold W. Bunch Jr. said.

“The message to the Airmen of AFMC  [is] … we will not go back to what we were doing before,” Bunch told reporters during a press conference at AFA’s Air, Space & Cyber Conference on Sept. 21. “I am setting that goal for Airmen, to see if we can get 50 percent in telework all the time, or in and out.”

Bunch said it’s been proven that almost any work that doesn’t require physical presence can get done remotely. The new model won’t apply to those doing physical work, like “having someone climb into the fuel tank of an F-15 going through the depot line … We’re not there yet,” he said.

When personnel workers had to return to the workplace, “We made a real commitment to make sure we took care of them. We went into shifts, spaced them out, rearranged work areas. That’s where we didn’t embrace” telework.

But for HQ staff and even the Air Force Research Laboratory and Air Force Nuclear Weapons Center, “we have demonstrated that we can execute the mission. We have demonstrated that we can award contracts, manage programs, get things done,” Bunch said. He acknowledged that some of his leaders balk at the idea of managing a workforce remotely, but the fact that AFMC has been able to perform with scarcely a hiccup while so many worked from home has convinced him to make the change permanent.

“There’s … no justification for, ‘Boss, we need to get everyone back in here,’” he said. “We are embracing it.” As for those who “are not as comfortable with it as I need them to be, … I will continue to work on that mindset and culture,” he said.

Bunch said he sees an opportunity to close buildings, reduce energy consumption, and avoid building upgrades—all of which will save money—through telework. More importantly, he’s sure the approach will make AFMC a more attractive employer and that ample telework opportunities will aid retention.

“We believe the younger generation, not more seasoned individuals like me, … like being in the digital world, feel comfortable operating in that kind of arena. They embrace it.” He added, “If we don’t go do this, we will end up losing Airmen in the long term. It is a retention issue for the long term.”

Any managers that come to him saying “they cannot telework anymore, we are challenging that—as to: ‘Why can you not telework?’” he said.

Bunch said he’s already got “locations that are doing ‘hot desks,’ where you schedule a desk and … clean it up when you get done.” There are lockers available to store personal desk knickknacks such as photos and certificates when the employee is not in the office.

He acknowledged that there are challenges to the new model.

“I will say it is not without risk,” Bunch noted. In a virtual environment, “It is more challenging … to bring in new employees and get them inculcated into the culture that we want of being an Airman.” It’s “hard to make sure they understand the mission thread. It’s hard to check up on them all the time. It is hard to make sure their resiliency is good.” If an employee is working virtually “and you don’t turn on your camera and you’re not communicating,” it’s more difficult to see if they know how to wear the uniform properly, keep fit, and have no collaborative problems.

“So, those are some of the challenges our leaders are working through.”