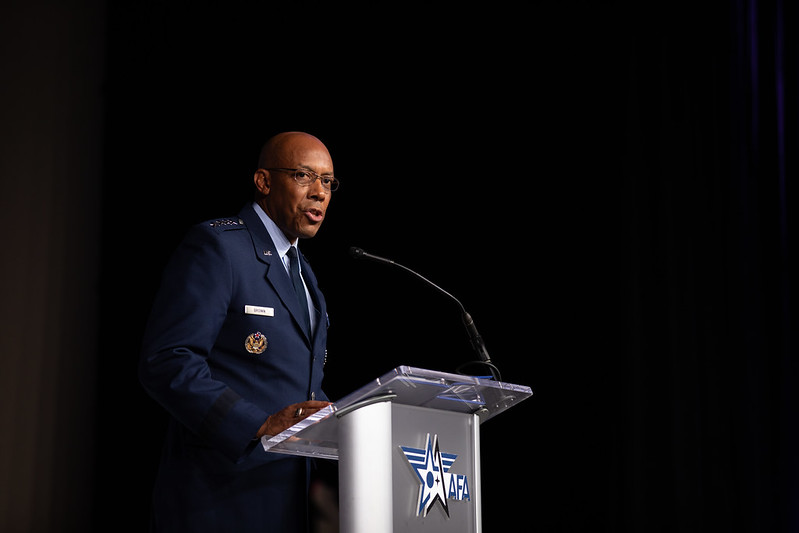 Aggressive competitors, limited resources, and accelerating technological advances compel the Air Force to rapidly transform, as it has during other inflection points in its 75-year history, Chief of Staff Gen. Charles Q. Brown Jr. said.

“We’ve done this before … we can do it again,” Brown said in his keynote address to AFA’s Air, Space & Cyber Conference.

Two years into his term, Brown said the Air Force can no longer assume it has dominant capabilities and must be willing to constantly rethink its technology and processes and to “collaborate within and throughout” to achieve its goals.

“We must change … if we want to preserve our way of life,” Brown said, invoking his “accelerate change or lose” mantra.

“We already know how to accelerate,” he said.

The nation finds itself “in a pivotal period … one that is fundamentally reshaping the international security landscape,” he noted. While the U.S. focused on “violent extremists” for two decades, “our competitors focused on matching” the Air Force’s dominant capabilities.

The challenges are “not new … but the complexity and combination” are greater, he said. While “Our tactical skills are sharp … we need to reframe our thinking to meet the challenges we will face in the future.”

Brown said, “If we don’t get this right, together—if we fail to adapt—we risk our national security, our ideals, and the current rules-based international order.”

The Air Force’s cultural change will be in five areas, Brown said:

In the lead-up to USAF’s founding in 1947, service pioneers “pushed the limits, challenged the status quo,” and proved the value of airpower and the credibility of a separate air-oriented military branch, he said. “Giants” in airpower history such as Hap Arnold and Billy Mitchell “risked their reputations and their careers because they knew what was at stake.”

In the decades that followed, the Air Force continued to innovate, he said. From the Berlin Airlift to the creation of supersonic aircraft and rapid development of intercontinental ballistic missiles, the Air Force met the nation’s security challenges, Brown said, and will do so again now. The Air Force, industry, and academia pooled their talents to develop ICBMs in just two years, he noted.

To overcome greater numbers of Soviet forces, the Air Force invested in and rapidly fielded stealth aircraft and precision weapons, leading to its dominant performance in the 1991 Gulf War and across the ensuing 20 years, Brown said. In the Balkans, the Air Force used the B-2 stealth bomber for the first time and fielded an armed version of the Predator remotely piloted aircraft “in just 39 days,” he said.

Today, the Air Force is again confronted with challenges to its ability to control the skies, defend the homeland, and penetrate to any target it must hold at risk, he said. It must not be daunted.

While still “the most respected Air Force and Space Force” in the world, Brown said that status must be earned. The path to do that is through ever-greater collaboration among the services and with industry—and by empowering Airmen at every level to figure out solutions that achieve their commanders’ intent.

Brown said he will forgive mistakes made in pursuit of true innovations, “pushing through failure until finding success.”

“This has always been in our DNA,” he added. “With every new trial, no matter how difficult, we proved we could rise above any challenge … if we were willing to take risk.” Airmen must feel free to “challenge the status quo.”

Calling for experimentation, risk-taking, and “creating disruption at all levels,” he directed Airmen to pursue faster and better ways to accomplish the mission.

“We have done this no matter how seemingly impossible” the challenges, he said.

Brown cited several examples of Airmen who have risen to this challenge, including Senior Master Sgt. Brent Kenney of the 52nd Fighter Wing, who came up with a way to create potable water at a remote location using solar fabric and “an environmental water harvester,” saving USAF from having to dedicate “precious” cargo missions to delivering bottled water and saving on diesel generators.

Adaptation today requires “collective effort” and collaboration—both within the Air Force and with its partners and allies worldwide—to “understand the environment,” define the threat, share information, and “employ airpower.”

Toward that end, Brown is working toward a future force he calls “Integrated by Design,” which will “start with allies and partners in mind, versus … adapting to include partners and allies later.”

The Air Force “can’t do this alone,” he said. ”We must accelerate. Our window of opportunity is closing. … We have to … get beyond talking about what we want to do … and go do.”