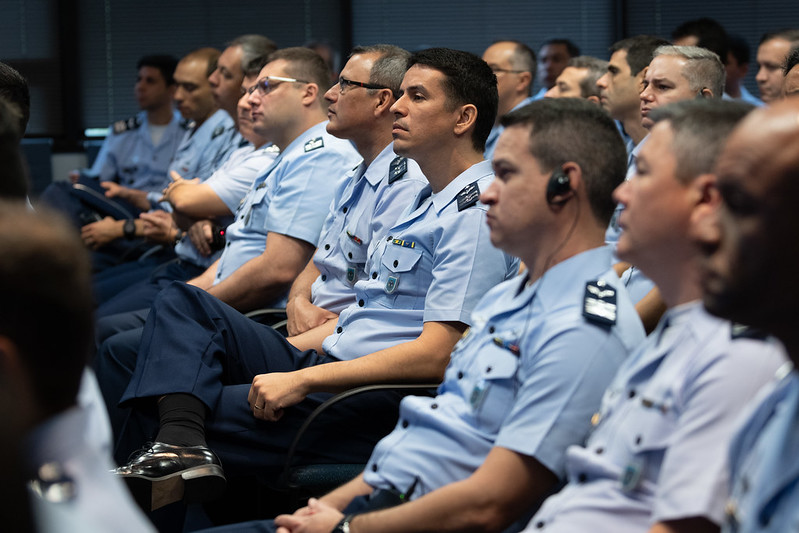 The Brazilian Air Force is increasing engagements with the United States in recent years, led by its partnership with the New York Air National Guard, which began in 2019. This week, more than 100 mid-career officers from Brazil’s Air Force Command and Staff College (ECEMAR) and Air Command and Staff Studies (CCEM) program are in the U.S. for meetings and briefings, beginning with a brief from AFA’s Mitchell Institute for Aerospace Studies.

Retired Lt. Gen. Bruce Wright, president of the Air & Space Forces Association (AFA), framed the discussion around allied cooperation. “We have to be very focused together with our allies, with our friends, to defend our nations, to defend our citizens, and to provide opportunities of safety and freedom,” he said. “We know we share those values with the Brazilian Air Force.”

Mitchell’s dean, retired Lt. Gen. David A. Deptula, explained to the officers that the U.S. Air Force’s emerging concepts of operations, including developing joint all-domain command and control systems and processes, the future Next Generation Air Dominance systems, and agile combat employment. He also discussed budgetary realities that have left the U.S. Air Force “the smallest, oldest, and least ready in its history.”

While that smaller U.S. Air Force is still far larger than Brazil’s, the issues of technology, capability, and capacity to operate are common. “I know these numbers seem big to you, but we have different defense strategies,” Deptula said. The United States is a global power, and in global competition, he said, numbers matter.

But at the same time, “Many of the issues that America’s aerospace forces face are ones that are confronting Brazil’s aerospace community,” he said.

The Air National Guard’s engagement with Brazil is part of the Department of Defense’s State Partnership Program, which pairs units from DOD’s 54 state and territorial National Guard organizations with 93 partnered countries.

In August’s Exercise Tapio, more than 1,000 Brazilian forces and 100 U.S. Airmen took part. U.S. aircraft included an HC-130J, two C-17s, and three HH-60 helicopters. The exercise focused on combat search and rescue, aerial refueling, and close air support missions. A-10 pilots from the Maryland Air National Guard’s 104th Fighter Squadron joined the mix, flying with their counterparts in Brazilian A-1 and A-29 aircraft. Members of the Oregon National Guard also joined in.

Deptula said international exercises help build crucial bridges between nations. “Friends and allies, in partnership with America, provide all involved mutual strategic advantages,” Deptula said. “The more thinking we share on issues regarding our aerospace forces, the safer and [more] secure we and our partners will be.”

Sharing insight with allied air forces is part of the Mitchell mission to advance air power understanding.  “We’ve hosted many air chiefs, leadership, and delegations from partner nations around the world—the United Kingdom, Germany, Japan, Italy, Australia, among others,” Deptula said. “Those interactions always bring us closer in understanding their challenges, and we reciprocate with the leading-edge ideas that our Air and Space Forces are pursuing. This was an opportunity to have a much broader officer-level interaction with future aerospace leaders on where we see air and space power evolving.”

Deptula noted that air and space power apply in all domains and all regions around the world. For example, while some might see the INDOPACOM region as being inherently naval in nature, owing to the vastness of the Indian and Pacific Oceans, 100 percent of the region—including all of Asia—is covered by the air and space domains.

One of the ways the U.S. and allies will gain advantage in the future is through the development of new technologies that increase complexity for adversaries while improving the ability to communicate and share data and targeting information across domains and with international partners.

JADC2 is a defense-wide concept for connecting any sensor with any shooter across a “network of networks,” using machine learning and artificial intelligence, he said. The Air Force is working hard to figure out how to do that, he said, and its Advanced Battle Management System is its system for trying to achieve that aim. The other services are also pursuing the means to connect.

JADC2 will require secure communications essential to everything from targeting to timing for all services, using technologies such as new high-speed laser communications between satellites.