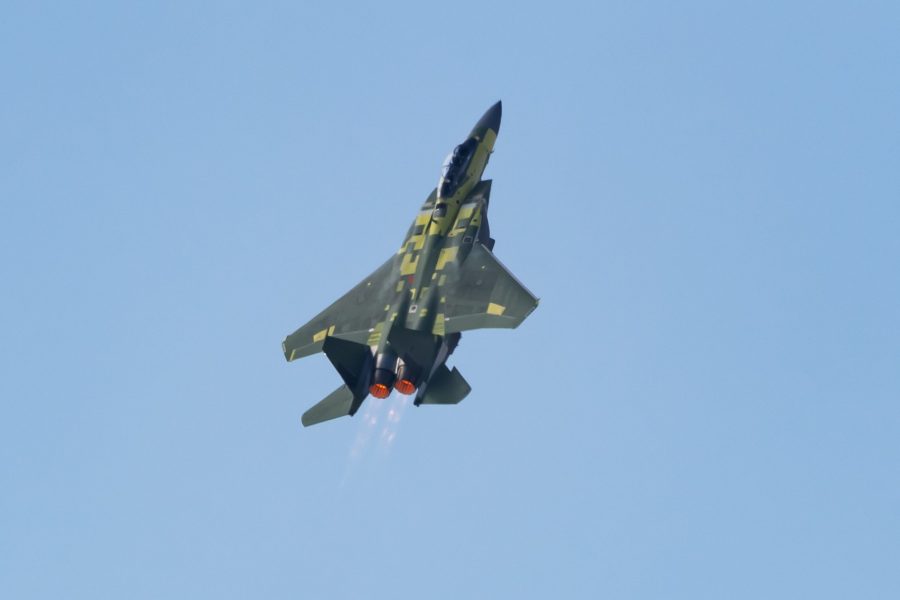 Boeing flew the first F-15EX Eagle on a 90-minute hop around the St. Louis, Mo., area Feb. 2, signaling that the jet will soon be ready for flight testing at Eglin Air Force Base, Fla.

Boeing test pilot Matt Giese flew the jet, with Boeing test pilot Michael Quinitini in the back seat. The flight, which began with a max-performance vertical climb from St. Louis Lambert International Airport, abutting Boeing’s combat aircraft plant, was meant to test out basic handling qualities, “avionics, advanced systems, and software,” and all went as expected, a Boeing spokeswoman reported. “A test team monitoring the data collected during the flight in real time confirmed that the aircraft performed as planned,” Boeing said in a press release. The test card for the flight is not being made public.

The jet, tail number 20-0001, is the first of two that are to be delivered for testing at Eglin by the end of March. A formal “rollout” of the second aircraft or an arrival ceremony at Eglin is slated to occur in March or April, months ahead of schedule. The Air Force awarded the formal F-15EX contract for the first eight airplanes in July of 2020.

The aircraft is powered by two F110-GE-129 engines, the only ones so far certified to fly with fly-by-wire Eagles. The Air Force has told Pratt & Whitney it can offer engines for the F-15EX program if it certifies its F100 engines on the type at its own expense. GE is under contract for 19 powerplants for the eight planned F-15EX test aircraft.

The Eagle is expected to reach initial operational capability at Kingsley Field, Ore., in 2024. The F-15EX will have sufficient structural life to serve through 2050.

The fighter has two seats and is based on the 1970s-vintage F-15C/D Eagle, but upgraded with a modern suite of flight controls, computers, and defensive electronics. It is equipped with conformal fuel tanks and two extra weapon stations, versus the F-15C. The Air Force is buying it to supplement the fleet of legacy Eagles that are rapidly aging out and can’t be economically life-extended. The Air Force plans to buy between 144 and 200 F-15EXs, depending on whether the type will also replace F-15E Strike Eagles, which still have a decade of service life remaining. Despite the second seat, the Air Force intends to fly the F-15EX with only a single pilot.

Unlike export models, the F-15EX and older USAF F-15C/Ds will be protected by the Eagle Passive Active Warning Survivability System (EPAWSS), a suite of electronic warfare gear and countermeasures to extend the type’s combat longevity.

The jet is seen as meeting Air Force capacity shortfalls in air defense and as a standoff weapons-carrying platform that could operate outside contested airspace.