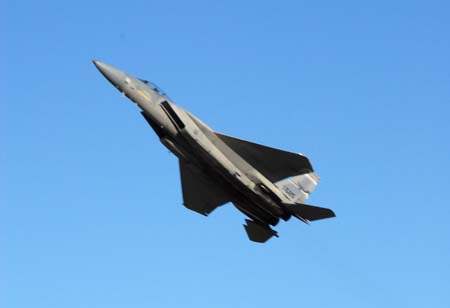 he Montana Air National Guard’s 120th Fighter Wing in Great Falls is taking important steps to complete its conversion from F-16s to F-15s per BRAC 2005. The unit is scheduled to conduct a phase 2 operational readiness exercise June 1-6, Maj. Tim Crowe, a wing spokesman, tells the Daily Report. Depending on the results of this drill, the wing’s commander may decide soon thereafter that his airmen are ready to assume initial operational capability with the F-15s—the so-called IOC milestone, said Crowe. That would be a remarkable achievement since it would be about a full year ahead of the unit’s original conversion schedule. Crowe said the wing has just come off its very first participation in a Combat Archer air-to-air exercise while flying F-15s. Ten of its F-15s and more than 90 airmen deployed to Tyndall AFB, Fla., for the April event.