Skip to content
President Joe Biden promised three high-level talks between the U.S. and Russia in the hopes of de-escalating tensions along the Ukrainian border. White House photo by Adam Schultz.
Expand Photo 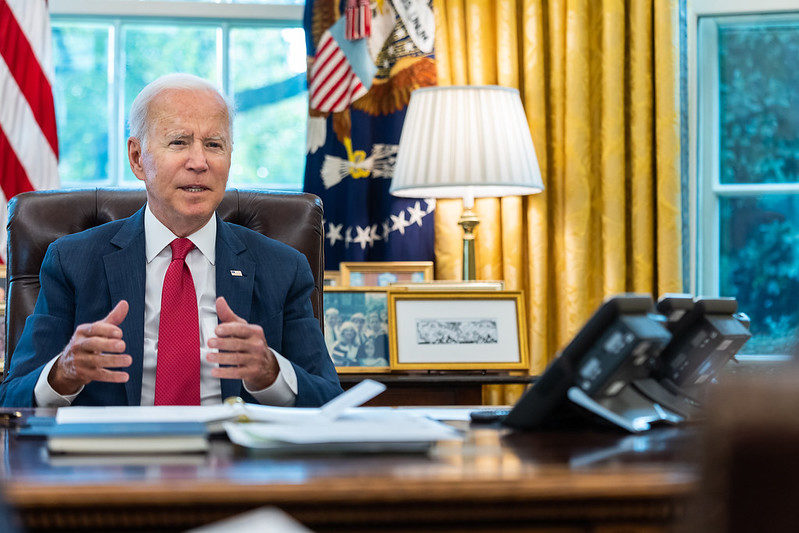 President Joe Biden kicked off the new year with a promise of three high-level talks between the United States and Russia to address tensions along the border with Ukraine and Russia’s concerns about NATO.

The first high-level talks between Russian and American officials will take place Jan. 9-10 in Geneva.

Following the Strategic Stability Dialogue, a NATO-Russia Council meeting will take place Jan. 12 and a meeting of the Organization for Security and Cooperation in Europe (OSCE), which monitors adherence to the Minsk accords, is planned for Jan. 13.

Russian President Vladimir Putin has maintained a forceful troop presence of some 100,000 virtually surrounding Ukraine, with sophisticated air force and anti-access/area denial (A2AD) capabilities that experts believe would allow for a swift invasion. Biden has warned of heavy sanctions and reinforcements to NATO’s eastern flank if Russia invaded, but the President has not increased deterrence measures despite private calls from allies. Biden has also repeated his support for Ukraine’s sovereignty, but not provided additional defense assistance to that country following a December visit to Ukraine by a U.S. air defense team.

“I made it clear to President Putin that if he makes any more moves and goes into Ukraine, we will have severe sanctions,” Biden said at a press gaggle Dec. 31 in Wilmington following a call the day before with Putin.

“We will increase our presence in Europe with our NATO Allies, and it will have to be a heavy price to pay for it,” Biden underscored. “[Putin] laid out some of his concerns about NATO and the United States and Europe, and we laid out ours. And we said we’d begin to negotiate some of those issues.”

Biden also said that he told Putin none of that would happen unless Russia de-escalated. He did not specifically address a question from reporters as to whether he thought Putin would invade Ukraine, instead pointing to Russia’s agreement to take part in the series of talks.

“I always expect if you negotiate you make progress, but we’ll see. We’ll see,” Biden said.

On a background call with journalists the day before, a senior administration official described the conversation between Biden and Putin as “serious and substantive.”

In past public statements, Putin has called for a guarantee that Ukraine would not be allowed to join NATO, something the U.S. has refused to accept. The Russian leader also discourages countries from providing defense assistance to Ukraine and considers any movement of troops or equipment near Russian borders a threat to Russia’s national security.

“President Biden laid out two paths, two aspects of the U.S. approach that will really depend on Russia’s actions in the period ahead,” the official said.

In one path, Russia chooses diplomacy and de-escalation. That means reducing its troop presence along the borders of Ukraine and returning to the Normandy Format of multi-country talks to bring Russia back in accordance with the Minsk Accords that reduced conflict in the eastern Donbass region of Ukraine. Russia invaded that region in 2014 when it seized Crimea, and Russian-backed separatists still control the Ukrainian provinces of Donetsk and Luhansk, with casualties on both sides each week.

In the second path, Russia chooses to further invade Ukraine.

“The other is a path that’s more focused on deterrence, including serious costs and consequences should Russia choose to proceed with a further invasion of Ukraine,” the official said. “Those costs include economic costs, include adjustments and augmentations of NATO force posture in Allied countries, and include additional assistance to Ukraine to enable it to further defend itself and its territory.”

“The first international talk of the year with @POTUS proves the special nature of our relations,” Zelensky wrote. “We appreciate the unwavering support of [the United States].”

Zelensky also said Biden had discussed with him continued reforms in Ukraine, and the breaking down of oligarch control of economic and political sectors.