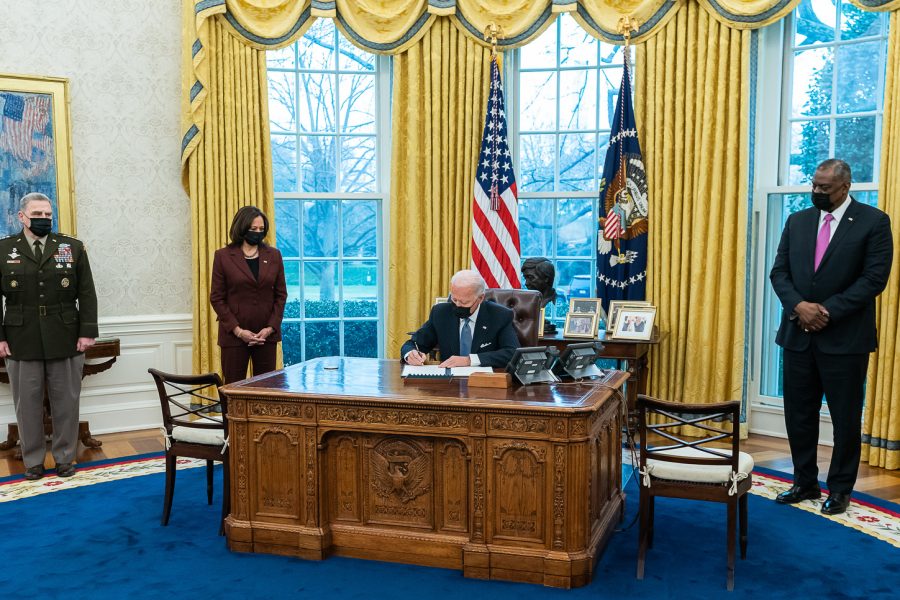 The U.S. military under President Joe Biden will use force as a “tool of last resort” as he aims to bring a responsible end to ongoing wars, though he told Defense Department employees during his first Pentagon visit that he will never hesitate to use force if needed.

“Our country is safer and stronger when we lead not just with the example of our power, but with the power of our example,” Biden said during the visit on Feb. 10, alongside Vice President Kamala Harris and Defense Secretary Lloyd J. Austin III.

During a brief speech from the stage in the Pentagon briefing room, Biden told service members and DOD civilians the military’s “central mission is to deter aggression from our enemies and, if required, fight and win wars to keep Americans safe.”

Biden said the U.S. needs to “rethink and reprioritize our security to meet the challenges of this century, not the last.” This means embracing emerging technology and enhancing cyber capabilities to ensure the U.S. will lead the “new era of competition from deep space to outer space,” he said, calling out China in particular as a growing threat.

He did not bring up any budget priorities for the department, though the Pentagon is bracing for possible cuts, nor did he touch on other major strategy goals. He did not take questions.

Biden repeatedly highlighted the service of his late son Beau, who was a captain in the Delaware National Guard who deployed to Iraq and served under Austin when he led U.S. Forces-Iraq. “I understand the full weight of what it means” to use military force, he said.

“For those of you who raise your hands and sign up to wear the uniform of the United States, we owe you an incredible debt,” Biden said, adding he and his administration will “never disrespect you, never politicize the work that you do. This is personal for me. The Biden family is a military family.”

Following the speech, which comes during Black History Month, Biden and Harris visited the Pentagon’s African Americans in Service Corridor with Austin and Chairman of the Joint Chiefs of Staff Army Gen. Mark A. Milley. While 40 percent of the military’s Active duty force is composed of people of color, the higher ranks of the force do not reflect that diversity—it is “long past time that is reflected at every level of this department,” Biden said. Austin is the first Black Defense Secretary, and Chief of Staff of the Air Force Gen. Charles Q. Brown Jr is the first Black uniformed leader of any U.S. military service.

Biden said his administration is committed to ensuring “every single person is treated with dignity and respect.” One of his first acts as President was to overturn the ban on transgender individuals serving in the military, and it’s why Austin’s first memo as Secretary was focused on the issue of sexual assault, he noted.

“Every single person, no matter their gender, identity, sexual orientation, race, or religious background, deserves to feel safe in the ranks and to have their contributions valued,” he said. “It’s on all of us to stand up, to speak out when you see someone being abused.

“This is an organization that has defeated American enemies on land, sea, and air and [has] been defined by the way we treat others, so I know that this is not beyond us, not if each of us makes this a priority as well.”