Beware of the Fallout 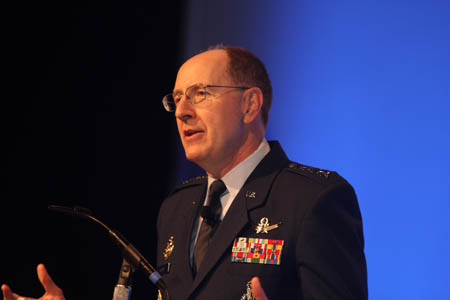 deployed nuclear arsenal of today is “safe, secure, and effective,” Gen. Robert Kehler, US Strategic Command chief, assured lawmakers this week. “In fact, I’m extremely confident in that,” he stated in testimony to the House Armed Services Committee’s strategic forces panel. And, while the Obama Administration’s proposed funding and schedule adjustments in Fiscal 2013 add risk to the nation’s much-needed nuclear force modernization, “it’s manageable,” asserted Kehler. However, it’s a different ballgame if there are more changes beyond Fiscal 2013 to the modernization plans, he said. “I think that we are reaching some points where further adjustments would cause me to have to reassess whether I believe that the operational force is being taken care of,” said Kehler. For example, the Pentagon’s Fiscal 2013 budget proposal slows the pace of fielding the replacement to the Navy’s Ohio-class ballistic missile submarine by two years. “I think that further delay to the Ohio replacement . . . will jeopardize our collateral work with the UK,” he explained during the April 17 oversight hearing. “I think that would be a mistake.” (Kehler’s written testimony)