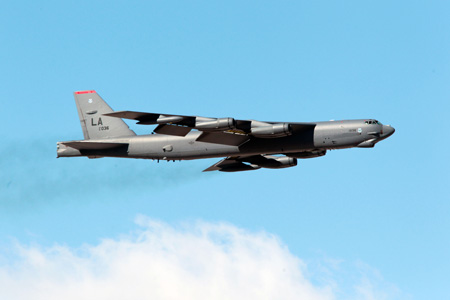 contingent of airmen and B-52s from Barksdale AFB, La., flew to Andersen AFB, Guam, to provide the next rotation of the Air Force’s continuous bomber presence at the Pacific air hub. The airmen began departing Barksdale on Oct. 1 to relieve the members of the 69th Expeditionary Bomb Squadron from Minot AFB, N.D., who deployed to Guam for a six-month stint at the end of March. The Barksdale airmen, who will constitute the 96th EBS while at Andersen, will be the first contingent from the Louisiana base to stay on Guam for six months, according to an Oct. 5 Barksdale release. Previously, the bomber units rotated every four months. “Ours is the first six-month rotation,” explained SMSgt. Joseph Sternod, 96th Aircraft Maintenance Unit assistant maintenance superintendent. By swapping out the bombers less often with the longer rotations, Air Force Global Strike Command aims to cut logistical costs and add greater stability to the mission, according to the release. (Barksdale report by SSgt. Chad Warren)