B-52 Units Rotate in Pacific 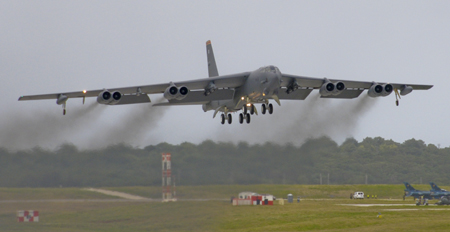 23rd Expeditionary Bomb Squadron—six B-52s and a contingent of airmen from Minot AFB, N.D.—completed a four-month deployment to Andersen AFB, Guam, as another B-52 expeditionary unit from Minot, the 69th EBS, took over at the Pacific air hub. The swap-out ceremony took place on March 22. During their time on Guam, 23rd EBS B-52s flew 186 sorties and accumulated 1,200 flight hours, according to CMSgt. Michael Crabtree, 36th Expeditionary Aircraft Maintenance Squadron superintendent. They participated in multiple exercises, including Cope North with Australian and Japanese air assets. A B-52 from the unit also performed a flyover at the Singapore air show. “Here in the island, the crew members are able to spend more time studying tactics, techniques, and procedures,” said Capt. Jarred Prier, 23rd EBS mission planning cell team chief. He added, “We are then able to hone our skills on our training sorties.” The Air Force has maintained a continuous bomber presence at Andersen for nearly a decade by rotating units several times a year. The bombers are meant to promote security and stability in the Asia-Pacific region. (Andersen report by A1C Marianique Santos)