Skip to content
Secretary of Defense Lloyd J. Austin III listens as Ukrainian Minister of Defence Oleksii Reznikov addresses the Ukraine Defense Consultative Group meeting at Ramstein Air Base, Germany, April 26, 2022. Austin met with his NATO counterparts and over 40 other nations to discuss both the current and future defense needs of Ukraine. DOD photo by Chad J. McNeeley.
Expand Photo 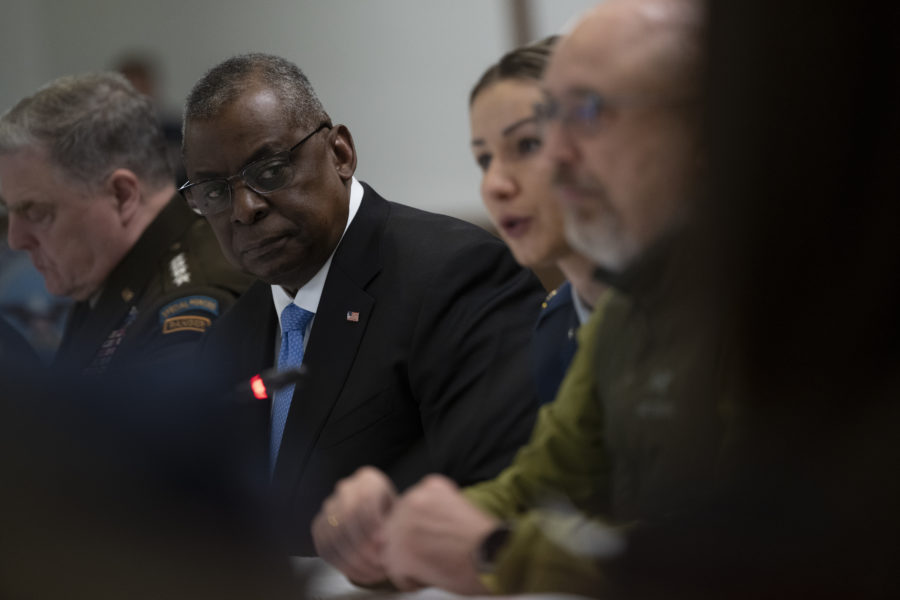 Austin: Partners Must ‘Move at the Speed of War’ to Help Ukraine

RAMSTEIN AIR BASE, Germany—Defense Secretary Lloyd J. Austin III called on more than 40 nations providing defense aid to Ukraine to “move at the speed of war” at a meeting at Ramstein Air Base, Germany, focused on better coordinating the rapid transfer of weapons to the front line of Ukraine’s war with Russia.

“We’re all determined to help Ukraine win today and build strength for tomorrow,” Austin said in closing comments at Ramstein’s Officer’s Club. “We’ve got to move at the speed of war.”

Assembled in less than a week, Austin opened the Ukraine Defense Consultative Workshop describing a “sense of urgency,” and he committed April 26 to keeping the momentum going with the creation of a monthly Ukraine Contact Group, which will be open to any nation willing to help meet Ukraine’s evolving defense needs so it can “win” the war against Russia.

“The Contact Group will be a vehicle for nations of goodwill to intensify our efforts, coordinate our assistance, and focus on winning today’s fight and the struggles to come,” Austin said.
The group of nations made “tangible” progress at Ramstein, including new assistance from Germany, Canada, the United Kingdom, and other countries that want to remain anonymous, according to a senior defense official.

Those new weapons include air defenses and armored vehicles. Germany committed 50 Cheetah anti-aircraft systems, and the UK will provide new anti-aircraft capabilities.
The meeting included a battlefield update from Ukrainian Defense Minister Oleksii Reznikov and his staff, a description of the U.S. European Command coordination center by Air Force Gen. Tod D. Wolters, a sober briefing by Chairman of the Joint Chiefs of Staff Gen. Mark A. Milley, and a plan for Ukraine’s long-term security needs.

U.S. Air Forces in Europe commander Gen. Jeffrey R. Harrigian told Air Force Magazine that the sense of urgency led the nations to come to Ramstein to solve the problem of timely and catered defense aid.
“I don’t think anyone could have predicted the level of dedication to this mission set,” he said during a pull-aside interview. “It’s impressive to see all the nations come together on such short notice.”
Harrigian said explaining the EUCOM coordination mechanism to those in attendance will improve delivery of Ukrainian aid going forward.

“We just needed to make more people aware of it,” he said of the EUCOM Control Center Ukraine (ECCU) at EUCOM headquarters in Stuttgart, Germany.

Harrigian also said air power was an important topic of discussion at Ramstein.
“Collectively, we’ve got to step up and understand what the Ukrainians’ requirements are, and find a way to get it to them and get it to them quick,” he said.

“I’m sure that more defense assistance is needed for Ukraine,” Polish Defense Minister Mariusz Błaszczak told Air Force Magazine during a pull-aside interview before the start of the conference.
“Poland is participating in this process from the beginning of the war, and now it’s the best time to coordinate this cooperation with Ukraine,” he said. “We should motivate other allies in our alliance and like minded countries to speed up this support.”

Some 29 ministers of defense and 21 chiefs of defense turned out from across the globe, including EU member states, North Africa, and the Middle East.

“The first step is to end this conflict,” Austin said. “We leave tonight strengthened, and so does Ukraine.”