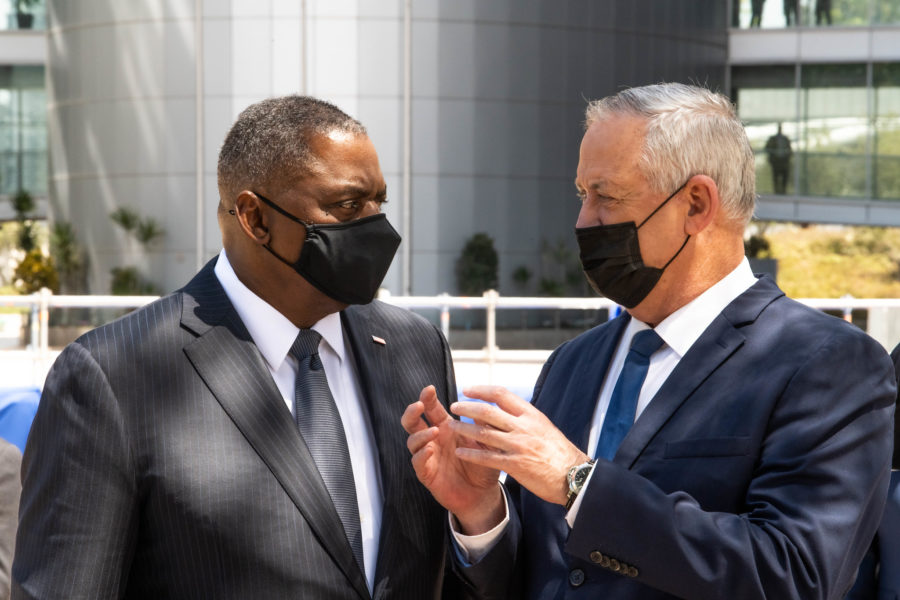 Austin, in Tel Aviv, Calls for Increased Coordination with Israel

Defense Secretary Lloyd J. Austin III traveled to Israel for high-level meetings with Israeli officials, to discuss ways for the two militaries to work together as the U.S. prepares to re-engage on talks related to the Iranian nuclear deal. The meetings come as an Iranian facility loses power in a mysterious incident.

Austin, the first senior Biden administration official to visit the country, met with Israeli Defense Minister Benny Gantz and is scheduled to meet with Prime Minister Benjamin Netanyahu. The visit also comes after the U.S. military shifted Israel from the U.S. European Command area of responsibility to U.S. Central Command.

“They have great capabilities as it stands and, of course, we want to make sure that we remain interoperable,” Austin told reporters April 12. “… In terms of our plans, our concepts, and how we use our equipment, I think it’s important that we continue to work on that partnership.”

On April 11, as Austin arrived in Israel, the Iranian nuclear facility in Natanz lost power, with reports alleging that an Israeli cyber attack caused the blackout. The facility was starting up new centrifuges the same day, and Iranian officials said the black out is an act of “nuclear terrorism,” according to the Associated Press.

“I’m aware of the reports,” Austin told reporters. “I really don’t have anything to add on Natanz. In terms of our efforts to engage Iran in diplomacy on the [Joint Comprehensive Plan of Action], those efforts will continue, and I’m very, obviously, supportive of the President’s efforts to negotiate a way ahead there. And I’ll just leave it at that.”

During an April 11 appearance alongside Austin, Gantz said the U.S. is “the full partner across all operational threats, not the least, Iran. The Tehran of today possess a strategic threat to international security to the entire Middle East and to the state of Israel. And we will work closely with our American allies to ensure that any new agreement with Iran will secure the vital interest of the world, of the United States, prevent dangers, unrest in our region, and protect the state of Israel.”

The U.S. Air Force and Israeli Air Force have been training together regularly, including exercise INIOCHOS 21 in Greece, which began April 12 and runs through April 22. USAF aircraft and Airmen with the 31st Fighter wing at Aviano Air Base, Italy, and Israeli forces are training along with forces from Greece, Canada, Cyprus, Slovenia, Spain, and the United Arab Emirates in the large-scale exercise, according to a U.S. Air Forces in Europe release.